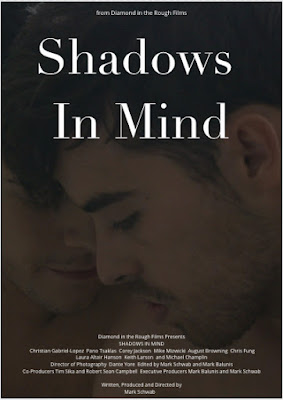 In 1965, Sydney Pollack directed his first feature-length film The Slender Thread featuring Sidney Poitier as a college volunteer singlehandedly manning a hotline crisis center. He receives a distress call from a suicidal woman (Anne Bancroft) who has taken an overdose of barbituates. Poitier struggles to keep her on the line until her whereabouts can be traced and an emergency crew dispatched to save her.

Although Shadows in Mind (2018) is not director Mark Schwab’s first feature—he has been writing and directing films for over 25 years—it’s hard not to cite The Slender Thread when considering Schwab’s Shadows In Mind, with the issues of Pollack’s film updated to contemporary queer concerns, some 50+ years later.

For starters, Simon (Corey Jackson)—a recently trained hotline operator at a Silicon Valley LGBT crisis center—is, notably, a Black man with the same earnest desire to make a difference for his community. Whereas Poitier’s performance had the concern of the Civil Rights movement and efforts towards racial equality as topical if unstated underpinnings, Simon struggles no less in trying to be professional and taken seriously by gay men phoning into the crisis center with self-deluded definitions of what constitutes a crisis. Moreoften than not, they’re hoping to use the hotline to complain about their jobs, whine about their boyfriends, or flirt for sex chat. After his first week on the job, Simon is already beginning to lose faith in the efficacy of his position.

Until he receives a phone call from a young gay who identifies himself as Danny (Christian Gabriel), recently transplanted from a sheltered upbringing in Nebraska to a high-paying tech job in the Silicon Valley that nonetheless doesn’t allow him to afford the best the Bay Area has to offer. Just as I began to cringe that the narrative would veer towards one more entitled and self-piteous tech bro, the subject of suicide and murder is introduced into the conversation. Not only is Danny going to kill himself but he’s going to kill three other people: his boyfriend Kyle (Pano Tsaklas) and his boyfriend’s employers Lance (August Browning) and Christian (Christopher Fung). Why he’s planning to do this is, of course, the thrust of this film’s narrative, which transforms into a slow burning thriller, effectively paced, nuanced in restrained measure, and disturbingly intent on successfully building suspense.

Just as flashbacks in The Slender Thread revealed how Bancroft’s character felt abandoned by her husband (who discovers their son is not biologically his)—in essence, Bancroft is exposed as engineering a lie—so flashbacks help Simon piece together the engineered lie that has brought Danny, Kyle, Lance and Christian to their fateful denouement. As the song goes, “Your lies will find you.” What makes this lie contemporary and its betrayal searingly relevant to the film’s intended audience is its involvement with the underground pornographic subcultures of the Darknet. Shadows in Mind is a cautionary tale for unsuspecting, if naïve, gay men who use online dating sites to seek out companionship without either recognizing or acknowledging the predatorial hazards of such liaisons.

These concerns are what motivated Schwab to shape Shadows in Mind “as a psychological LGBT/Thriller tackling the issues of suicide, sex, social media (and how relationships are created from it) and online exploitation, all wrapped up in a race-against-time thriller.” Schwab has done his research. In a survey conducted as recently as 2016, 56% of gay men revealed that they used online dating apps in public, while 78% said they credit an online app with starting a conversation with a guy they otherwise wouldn’t have. Even more surprising was the statistic that 66% of those surveyed said they used online dating apps with the intention of “seeking long-term potential” and not just a fun fling. Naturally, this led Schwab to his cautionary hypothetical: what if a vulnerable, lonely young man—and Lord knows, he doesn’t necessarily have to be young—meets someone online who has specific, ulterior motives?

Directing restrained performances from his handsome cast, inducing just the right mix of fantasy and prurience without cascading into the all-too-familiar softcore trappings that characterize too much of LGBT filmmaking, Shadows in Mind delivers a stern, thought-provoking warning and adds a twist that makes the lie—whose cold heart is a dark betrayal—allegiant to Bancroft’s in The Slender Thread. Whether intended or not, Shadows in Mind is a citational masterstroke.
Posted by Michael Guillen at 2/08/2018 07:44:00 PM