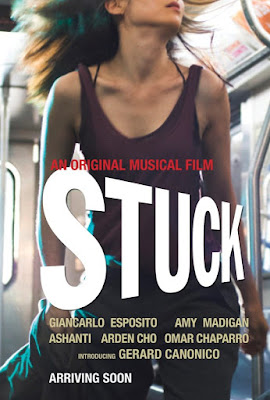 If only riding the MUNI underground would be as entertaining as Michael Berry's Stuck (2017), boasting its Bay Area premiere as the opening night entry for San Francisco IndieFest’s 20th edition. Perhaps the new seating arrangements on the new line of MUNI streetcars will afford a stage for same? Stuck, adapted from a musical play by Riley Thomas, concerns six strangers who get stuck on a New York City subway together and change each others lives in unexpected ways.

“Somebody’s son” Lloyd (Breaking Bad’s Giancarlo Esposito) provides the framing narrator whose homelessness immediately draws projected shadow from others on the subway train. Everyone characterizes him as crazy but Lloyd knows that each and every other person on the train is harboring some crazy self as well, but understands he will always be the bogeyman that people fear in the dark (the a capella sequence staging same is one of the film’s best numbers). Parallels are drawn early on, however, between Lloyd and Roman (Omar Chaparro), the anxious Latino who boards the train with a “bad case of rude”, already late for one of three jobs he’s taken on to support his struggling family. Both sit at the ends of the train. Both are avoided by the other passengers. Both remove and change their shoes in public. Roman’s opening number is a notable Spanish entry that underscores the plight of a loving father who has to choose between seeing his family and feeding his family. No subtitles are provided for this tune because, as Lloyd so sagely advises, sometimes you have to stop listening with your ears and listen, instead, with your heart.

Veteran Amy Madigan gives voice to Sue, the bleeding heart liberal whose well-meaning intentions—along with the recent loss of her (presumably gay) son to (presumably) AIDS—strangles her voice, such that everything she says comes off as “white woman bullshit”; nothing she says comes out right until she can sing it through with heartfelt articulation.  As a mother who has lost her son, Sue can intuit that Eve (Ashanti) is a young black woman who is feeling compelled to make a decision she may later regret.

The other story woven into this fanciful scenario involves Alicia (Arden Cho), a young Korean woman who has her reasons for not wanting to be “seen” by the nebbish artist Caleb (Gerard Canonico) who pursues her because he wants to draw her for his comic book about a handicapped superhero. I found their story the most compelling and satisfying for touching upon the bristling edge of a "me too" feminism and the plight of young men who need to make their intentions well-known.

Stuck is, in effect, a microcosmic parable of how “we’re all bozos on this bus” or, more relevantly, how we are all caught in a culture of received biases and entitled defenses. It is literally a cornucopia of social issues served on a musical platter that deftly avoids being trite by staging a fantasy that is much more complex than its simplicity belies. That’s not going to sit well with embittered urban cynics; but, for anyone who harbors a touch of hope in humanity, the film will be a song sung true.