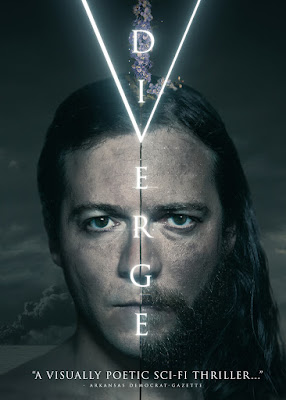 As synopsized by Gravitas Ventures: “In the aftermath of a mysterious pandemic that’s turned cities into wastelands, a man desperately searches for a way to cure his ailing wife as she battles a deadly virus. When he is captured by a cryptic stranger, he is offered the chance to save not only his wife but the world. Equal parts science fiction and morality tale, Diverge tells the story of how the choices of one can have dire consequences for all.”

If chance is our fate, then the choices we make determine our destiny. This all-too-human scenario has concerned such noted poets as Robert Frost with his choice in the “yellow wood” where “two roads diverged”, no less than it has been a prime narrative device for time travel scenarios, which Diverge deftly employs. As if to honor Frost, the typography of the capital “V” in the film’s opening titles signifies the divergent path of two directions posed to the film’s protagonist, Chris Towne (Ivan Sandimore).

In its wordless introductory sequence that sets the scene, Chris discovers dead animals and people while scouting the desolate salt flats outside the quarantined zones of a dystopian near-future. Impressive horizontal compositional cinematography by Darin Quan captures the bleak terrains of a dessicated world. His ailing wife Anna (Erin Cunningham) is suffering from a viral disease, detectable by a rash along her neck, that was first observed in livestock, and then spread to humankind, causing a devastating decimation.

A stranger, cryptically named “Leader” (Jamie Jackson), appears in the middle of the night with proffered supplies as barter for the warmth of a fire and human company, plus a mysterious offer, which at first Chris soundly opposes; but, which later—persuaded by grief once Anna dies—motivates him to become a reluctant accomplice assigned to return to the past to stop the virus that “was never meant to happen.”

With a well-publicized flu outbreak this year resistant to this year’s flu shot, it is becoming more and more tenable that our own human bodies and their susceptibility to viral and bacterial agents will most likely be our undoing. This is a body horror not as amplified as in the imagined fictions of David Cronenberg, but rendered poetic and thoughtfully restrained in Morrison’s vision of an imminent, if horrific, biological disaster.

A well-mounted sci-fi thriller of prescient perplexity—nodding to the plight of the homeless as a poignantly placed sociopolitical reminder that Death honors no class—Diverge is a doppelganger doublefuck and a cautionary near-future tale in a suspenseful race against split time and the split agendas of one of the world’s largest pharmaceutical companies, the Tyrell Corporation. It’s difficult not to infer a citation to Blade Runner, not only in the corporate name but in the frequent appearance of an origami crane, representing in Diverge—as in Blade Runner—the future’s uncertainty, particularly when the past intervenes.

In its encounters with the past, each time-travel narrative lays out its own rules and internal logic. In Diverge, contact with the past creates an alternate history; i.e., an alternate outcome, which complicates the capacity for choice.

This reviewer was particularly impressed with Morrison’s apt usage of mementos as the emotional markers of time. A music box plays the “Blue Danube” theme to put a child to sleep and, likewise, puts a mother to sleep when she has lost her child. A hand-hewn doll in a lifeless hand recalls the life that hand once held, and a conch shell—itself the ocean’s concretization of the whorl of time—holds the sound and memory of the ocean on the cracked silt-bed of salt flats.

Gravitas Ventures, a Red Arrow Entertainment Group company, is a leading all rights distributor of independent feature films and documentaries. Founded in 2006, Gravitas connects independent filmmakers and producers with distribution opportunities across the globe. Working with talented directors and producers, Gravitas Ventures has distributed thousands of films into over a hundred million homes in North America and over one billion homes worldwide. Recent releases include some of my favorites: Score: A Film Music Documentary, California Typewriter, and For The Love of Spock.