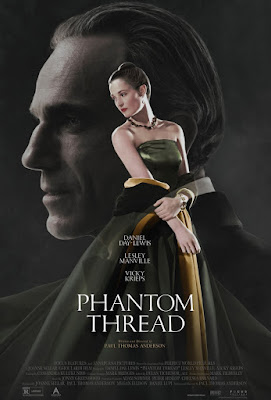 It was such a rapturous experience to view Paul Thomas Anderson's Phantom Thread (2017) projected in 70mm on the giant screen at Palm Springs' Camelot Theater with Anderson on hand for a generous, forthcoming Q&A session afterwards, moderated by Palm Springs International Film Festival (PSIFF) Lead Programmer David Ansen (Newsweek’s former film critic), wherein Anderson answered each and every question from his PSIFF audience, including my own regarding the film's evocative score (as much a character in the film as any of the actors, much like drifting snow whispers the voice of winter).

As synopsized in PSIFF’s program capsule: “An extraordinary love story that unfolds as a thriller, with a delicious touch of the gothic, Anderson’s film is unpredictable and impeccably tailored.” Vicky Krieps, as Daniel Day-Lewis’s formidable muse, holds her own across Lewis’s purportedly final film appearance.

PSIFF’s Special Presentation preview screening anticipated Phantom Thread’s wide theatrical release. Anderson’s latest is now playing in theaters everywhere, including the AMC Kabuki and Westfield Centre Century 9 theaters in San Francisco (though watching it in 70mm at the Alamo Drafthouse New Mission would be my hearty recommendation so that you can fully experience the narrative, down to the needle pricks in your fingertips). Phantom Thread likewise opens today at The Flicks in Boise, Idaho (unfortunately, though understandably, in standard format).

Michael Guillén: This is a marvelous watch in 70mm. Thank you so much for that. I’m enchanted by your score and soundtrack. Can you speak to their creation?

Paul Thomas Anderson: Well, it’s music written by Jonny Greenwood, who I’ve worked with on four or five films now. He’s a member of the band Radiohead but he’s kind of embarrassed to be a rock musician because really he’s a viola player. When he was a kid he was trained as a viola player.

Jonny Greenwood is like a musical faucet that you can turn on and music just comes out of him. So Jonny was involved very early on in the script, and all the research, and he would write music to that. He writes music in two-minute piano demos that he’ll send me. I’ll probably get like eight to ten two-minute piano demos a week and I’ll pick and choose and say, “This is great” or “this is greater” and sometimes things that might not seem exactly right, by the time we were finishing the film were exactly what we needed. But there’s a lot of stuff that he came up with before we started shooting, and that I had in my mind while we were shooting, and then those two-minute piano demos become orchestrated, made larger, and made to fit the film. So it’s a long process but he’s involved from the beginning, like with Daniel, and he’s a great collaborator to work with. Thank you for asking that.