Launching the 2018 edition of “Documentary Voices”—the Pacific Film Archive’s annual series of recent and historical documentary films—is a visit from Luis Ospina, who has flown in from Colombia to Berkeley to present a rarely-projected selection of his radical short works, gleaned from the Archivo Luis Ospina. Ospina was a founding member of the collective Grupo de Cali who—as noted by Samuel T. Adams in his Brooklyn overview “Pure Fictions: The Films of Luis Ospina”—“by negotiating the political while including questions of the popular, the group re-evaluated cinema’s role in society, and changed the face of Latin American filmmaking.”

Luis Ospina is among the most influential and prolific filmmakers in Colombia. Although influenced by the militant cinema that became prevalent across much of Latin America in the 1960s, collaborators Carlos Mayolo and Ospina incorporated political critique, a sense of aesthetics, and perhaps most importantly, humor. Their iconic Vampires of Poverty, a fictional documentary, satirized what Mayolo and Ospina described as pornomiseria (poverty porn), a type of documentary film funded by the Colombian state to satiate the demand abroad for images of poverty and underdevelopment. Eye / Sight is a later meta-reflection on this landmark film. (Adapted from a note by Michèle Faguet, via BAMPFA.) 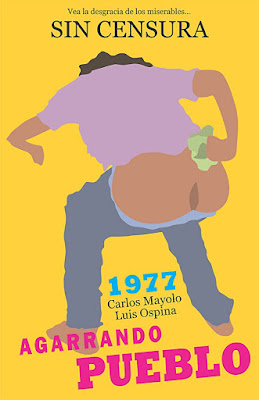 The Vampires of Poverty (Agarrando pueblo), dirs. Luis Ospina, Carlos Mayolo, Colombia (1978). Spanish with English subtitles. B&W/Color 16mm, 27 mins—I feel sorry for anyone unable to take advantage of the rare opportunity to see The Vampires of Poverty (Agarrando pueblo) projected in 16mm with Ospina present to field questions. For those unfortunates, this short is available to view on YouTube with English subtitles.

Eye / Sight (Ojo y vista: Peligra la vida del artista), dir. Luis Ospina, Colombia (1987). Spanish with English e-titling. Color 3/4" video, 26 mins—Ten years after Agarrando Pueblo (The Vampires of Poverty), there is a reunion with one of its protagonists, a street fakir who continues doing the same show. The vision of this film produces in him reflections on his life, his work and his image. For those who don’t require the English e-titling that will be provided by PFA, Ojo y vista: Peligra la vida del artista is available in Spanish on Vimeo.

PFA’s program is presented in conjunction with Natalia Brizuela’s UC Berkeley course on documentary film. Luis Ospina’s visit is made possible by the Los Angeles Filmforum series “Ism Ism Ism: Experimental Cinema in Latin America”, supported by the Getty Foundation, the Mike Kelley Foundation for the Arts, the Andy Warhol Foundation for the Visual Arts, and the National Endowment for the Arts, and presented at BAMPFA with the support of the Andy Warhol Foundation for the Visual Arts. Ospina’s presentation at PFA prefaces his program “A Rational Act of Faith” on January 20, 2018 at the Billy Wilder Theater in Los Angeles.
Posted by Michael Guillen at 1/16/2018 06:37:00 PM