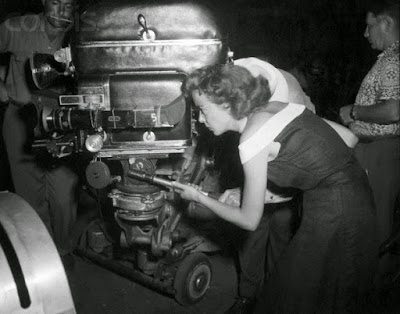 Back in March 2009, Frako Loden wrote up a profile of Ida Lupino for The Evening Class and I repurpose same to get the word out on “Ida Lupino: Hard, Fast and Beautiful”, the select retrospective currently running at the Berkeley Art Museum / Pacific Film Archive (BAM/PFA) through February 24, 2018. Loden focuses on Outrage (1950) and The Bigamist (1953), two projects made by Lupino’s production company Filmakers, both featured in the PFA series. Outrage screens this coming Saturday, January 20, 2018 at 8:00PM in an imported archival print and The Bigamist screens later on in the series in an archival print on Saturday, February 17, 2018 at 8:00PM.

Lately I've been thinking about the lost careers of female directors. Lost in that I don't know them—I never got to know them—and lost in that they have become unmoored from something stable and sure, struggling for footing in a male-dominated world.

Ida Lupino (1918-1995) can't exactly be considered lost as a director—she has a decent body of feature-film work and an impressive television resume. But seeing what she left behind, it's tempting to think how many more films she might have helmed had she the opportunity of, say, a Don Siegel, to whom she's often compared with the condescending "poor man's" prefix. 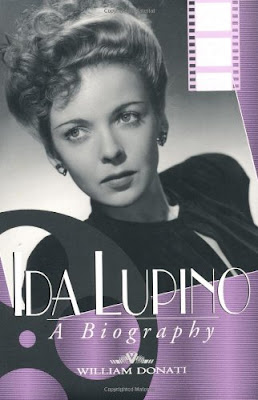 According to Lupino's biographer William Donati, a conversation with Roberto Rossellini had a profound effect on Lupino. Complaining about Hollywood, he asked her, "When are you going to make pictures about ordinary people, in ordinary situations?" He meant it rhetorically, but perhaps she took it personally.

Lupino's directing career began in her early 30s, when she was starring in Columbia productions like Lust for Gold (with Glenn Ford) and her husband Collier Young was a screenwriter and assistant to Harry Cohn. When Young resigned in a fit of anger, the couple joined up with a B-movie production company named Emerald. A few days before shooting began for Not Wanted (1949), director Elmer Clifton had a heart attack and producer Lupino took over. The film, about an unwed mother, was the first of hers that tackled bold and controversial themes such as polio, bigamy and rape. 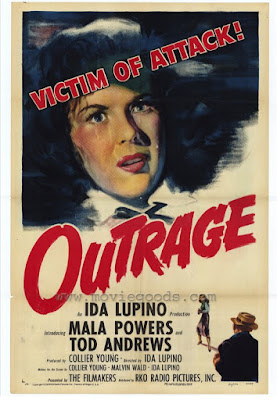 Outrage (1950), made by Lupino's production company Filmakers, explores the psychological effect of rape on a young woman (Mala Powers). When office sounds remind her of the assault and the neighbors' perceived stares start to drive her crazy, she runs away. Things may still be bad for rape victims, but to see what they underwent back then—incessant gossiping, names published in the newspaper, having to view a lineup of suspects face to face—is to appreciate the stigmatization that could lead to mental illness. Outrage steps into noir territory in its expressionist depiction of the assault itself, with long shadows on misty streets from high angles tailing a woman clinging to walls plastered with laughing-clown posters, as a blaring truck horn signals the nightmare half of a friendly industrial town. 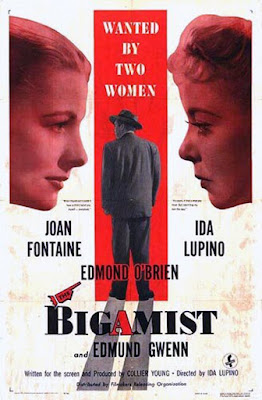 The Bigamist (1953), another Filmakers production, was made the same year as Lupino's tense, Mexico-set The Hitch-Hiker, often cited as the only true film noir made by a woman. Bigamist (as well as Outrage)'s screenplay was written by Lupino's ex Collier Young, who was currently married to co-star Joan Fontaine. A meld of melodrama and mild procedural driven by an adoption agency investigator, the film has only a superficial noirish resemblance to Double Indemnity in that the confessional male voiceover constantly refers to a "Phyllis" living in Los Angeles. At one point it seems Fontaine's businesswoman wife, "in one of her executive moods," will be blamed for her husband's seeking affection elsewhere. But Lupino manages to keep both her and the second, tougher waitress wife (played by Lupino) sympathetic, while lending some compassion to a husband (Edmond O'Brien) whose traveling-salesman loneliness gets him into one fine mess.
Posted by Michael Guillen at 1/19/2018 12:21:00 AM