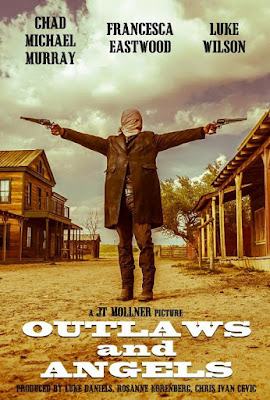 For their 20th edition, Fantasia opened with two World Premieres—Daniel Grou [Prodz]’s King Dave (2016) and John Stockwell’s Kickboxer: Vengeance (2016). My flight into Montreal arrived a bit too late to take advantage of either of those, though I did manage to rush down to the J.A. DeSeve to catch the Canadian premiere of JT Mollner’s debut feature Outlaws and Angels (2016), which premiered earlier this year in the Midnight Section at Sundance.

For me, it was perfect to start the festival out with what San Francisco Film Critics Circle colleague Dennis Harvey deemed “a Grand Guignol nod to spaghetti Westerns.” Something of a family affair, the film’s female lead Francesca Eastwood is not only Clint’s daughter, but also Frances Fisher’s (Fisher plays an ill-fated cameo as Esther). It’s all in the eyes, isn’t it? Francesca’s baby blues take after her mom, but here and again they narrow to the steely vengeance of her dad’s iconic countenance in Sergio Leone’s cult westerns.

The outlaws of the film’s title identify themselves early on as they kill innocent passers-by shooting their way out of a bank heist while wearing white hooded masks (that reminded me of Karen O’s concert persona where she painted on a face over a white hood), though real-life outlaw and highway robber William (“Brazen Bill”) Brazelton is allegedly the true inspiration for their get-up. A posse takes after the robbers, headed by bounty hunter Josiah (Luke Wilson) whose character provides a pensive, philosophical voiceover on the loss of innocence and the origins of violence.

And this movie is violent, no bones about it, and equally perverse. As women get slapped around, the kneejerk response is to deem Outlaws and Angels misogynistic, even as Eastwood’s character Flo surfaces as the narrative’s switchback protagonist. Mollner purposely treads a fine line and pushes boundaries here. When the robber gang lands at the remote home of the Tildon family, the film enters suggestive softcore territory as the story becomes a prolonged rape fantasy. That indiscretion is indulged through the casting of Chad Michael Murray as gangleader Henry. Murray harkens to the physical beauty of Franco Nero and Terrence Stamp in their own turns as spaghetti western anti-heroes. Stripped down, it’s a bit of a stretch to accept his forlorn position that he’s just too old to be an outlaw.

My favorite performance, however, was Teri Polo as Flo’s Bible-thumping mother Ada whose reliance on Jesus as savior demarcates her unhinged denial of all the glossed-over darkness swirling between her husband and her daughters. Each time she’s forced to consciousness, she lets out a banshee wail both pathetic and comic. As she succumbs to the probing fingers of one of the outlaws, she reveals a woman deeply conflicted about her own sexual needs.

Comparisons to Tarantino’s The Hateful Eight are unavoidable, right down to the shift from panoramic landscapes to widescreen interiors and—even though Outlaws and Angels is arguably a lesser film—Mollner stamps his own promising signature on every derivative turn and it will be interesting to see what he does in the future freed from the grip of homage. The lensing by Matthew Irving is allegiant to the genre, costuming by Liz Pecos is grimy and believable, but the score by Colin Stetson is distractingly indecisive: one moment electronic, the next all piano arpeggios. All in all, a bloody violent ride, now available for streaming on multiple platforms.
Posted by Michael Guillen at 7/15/2016 09:12:00 AM