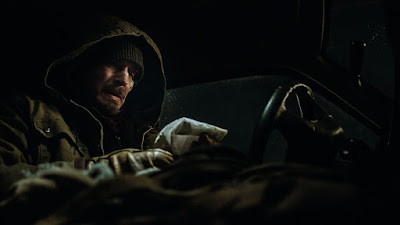 The narrative theme of the absent father is leant a startling new visibility in Geoff Redknap’s feature debut The Unseen (2016), screening as a World Premiere at Fantasia’s 20th edition. Redknap would be the first to admit that The Unseen, which he wrote as well as directed, was greenlit due to his well-earned cred as a master special effects and make-up artist (on such films as Deadpool, Watchmen, The Cabin in the Woods, the Final Destination and X-Men series, and such TV series as Fear the Walking Dead, Masters of Horror and—as Fantasia programmer Mitch Davis phrased it—“back in the day” X-Files. Quite the resume!

Adding to that impressive roster of credits, Redknap offers a brooding subdued re-visioning of the Invisible Man story. Mill worker Bob Langmore (in a taciturn performance by Aden Young, who has cornered the market on troubled masculinities, most recently on the TV series Rectify) is beleaguered by debt and regret. He abandoned his wife Darlene (Camille Sutherland) and daughter Eva (Julia Sarah Stone) eight years earlier. Eva is acting out and Darlene, unable to handle her, calls Bob for help. “She needs her father,” she pleads. Langmore comes out of his self-imposed isolation to do his part.

What first appears as an oft-told tale of parental estrangement and a struggle for reconciliation takes a shocking turn when it is revealed that Bob suffers from a hereditary illness that is causing him to vanish, chunk by chunk. Redknap has rounded up some of the best make-up, special effects and animatronic specialists to depict this malady, first hinted at when Bob stands in front of a television set and its blue light is seen shining through his body.

Folded into this taut narrative is an incisive critique of the harvesting of wild bear organs for Asian herbal cures and the shady characters who traffic same, with whom Langmore becomes inadvertently involved. But most compelling is the idea that we each must come to terms with the self-isolation we impose upon ourselves in response to an emotional suspicion that we have been abandoned by the generations before us. The Unseen suggests that blood is, indeed, thicker than water and that we are informed and guided by our fathers before us and their fathers before them by the articulation of abiding presence, even when—by all visible accounts—we seemingly stand alone.
Posted by Michael Guillen at 7/19/2016 08:28:00 AM