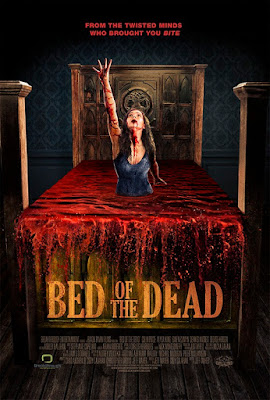 The team aesthetic of the Black Fawn production group impressed me (and inspired me to develop my own creative team) when—at last year’s edition of Fantasia—I had the opportunity to talk to Chad Archibald about his entry BITE, whose gooey allure I was able to program into San Francisco’s Another Hole in the Head Film Festival. As a business and creative strategy, the Black Fawn stable of talent work on and promote each others’ films so that each, in turn, can have their moment in the spotlight. At this year’s 20th edition of Fantasia, it’s Jeff Maher’s turn with the World Premiere of his directorial feature debut Bed of the Dead (2016). Maher served as cinematographer on BITE, Antisocial and Hellmouth, and has co-written Bed of the Dead with Cody Calahan, who earlier directed and co-wrote Antisocial (and its sequel), as well as co-writing The Drownsman.

Walking the talk of Black Fawn’s team aesthetic, it amused me to no end to see Chad Archibald in Bed of the Dead’s opening sequence in a cameo performance as a carpenter who takes wood from an accursed gallows tree, which he planes down to craft into a bed. The dispirited souls of all those who have been hung from the limbs of this tree inhabit the bed with its ornately sculptured headboard and wreak havoc on four swingers hoping to have a little fun at a sex club where the bed has ended up.

Black Fawn makes no pretense at elevated genre. They’re creating content for balls-out gorehounds and cleverly re-work and assemble tropes they know will satisfy their audiences. Hunky dudes are going to get eviscerated and lovely young women will be bathed in blood. That’s what Black Fawn promises and that’s what Black Fawn delivers. After all, as Stephen Sondheim has penned, “Who needs Albert Schweitzer when the lights are low?” Onto the expected sequence of being dragged under the bed or, for that matter, dragged onto the ceiling, Maher and Calahan have written some commendable flourishes worth noting, however. Two in particular.

First, the fabric of space and time is bent by cell phone texting. To hell with the roaming charges, police investigator Virgil (Colin Price) is trying to determine how five victims of a fire ended up in such a fate. The audience is told straight off that everyone is going to die and so, spectatorially, it’s a process of appreciating the choreographed kills. But when Virgil contacts one of the young women—“final girl”, in effect—fate seems less formidable.

More importantly, and with a deeper cogency, Virgil represents every white police officer who has killed an innocent black teenager. It seems obvious that nothing is more horrifying than real life, especially these days in the United States of America where the Black Lives Matter movement has brought into searing focus an institutionalized racism enforced by an increasingly militarized police force. Leave it to Canadian filmmakers to incorporate this American social issue into a genre format and this reviewer thanks them for their bravery in approaching the subject, albeit indirectly.
Posted by Michael Guillen at 7/19/2016 09:59:00 AM