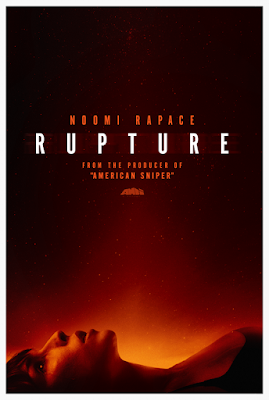 After a 10-year hiatus from filmmaking, Steven Shainberg returns to the fray with a disturbingly original study of abduction, Rupture (2016), a genre exercise boasting its World Premiere in Fantasia’s 20th edition. It’s a bit unsettling to consider that it’s been a full decade since I spoke with Shainberg for Fur: An Imaginary Portrait of Diane Arbus (2006): I was just starting out as a film journalist while he was, presumably, just about to discover how difficult it is these days to get a film financed. Kudos to the film’s production team—including Andrew Lazar and Bruno Rosato, accompanying Shainberg at Fantasia—whose tenacity helped Shainberg realize his unique vision. Shainberg should not be absent from the scene as long as he has been.

As Renee, Noomi Rapace comes off as an everyday single mother raising her young son Evan (in a fresh-faced turn by Percy Hynes White). At odds with her ex, she tries to shake off her troubled marriage by accepting an invitation to skydive. En route, she is abducted and taken to a remote undisclosed facility where she is subjected to bizarre tests that capitalize on her arachnophobia. Where is she? Who are her abductors? What do they want? Why is bringing subjects to the brink of terror so essential for their genetic research?

Though the edges of the script Shainberg has crafted with Brian Nelson (Hard Candy) are, perhaps, tucked in a bit too neatly—folding vagueness in upon itself like origami to achieve form—there’s no question that considerable thought has been exercised in keeping events as mysterious as possible until the narrative’s reveal. This responsible effort elevates Rupture with an art house intensity that offers the viewer a rewarding engagement with the film’s aesthetic tone and rhythm. The latter, especially, drives the film forward with a tantalizing momentum that allows you to know only as much as you are meant to know. Clear answers remain apples out of reach.

Rupture's narrative uncertainty is augmented by a lurid and lustrous palette of deep reds and purples effected by cinematographer Karim Hussain (who worked on my favorite horror film of last year, We Are Still Here). Hussain is rapidly rising through the ranks, and rightfully so, as one of the most adventurous and imaginative DPs in the business. Combined with Jeremy Reed's immersive production design, Sean Breaugh’s art direction and Shayne Fox’s labyrinthine set design, replete with honeycomb motifs throughout (and a tip of the hat to Kubrick’s The Shining), Shainberg’s production team has created a claustrophobic crawl through what is gradually perceived as a hive. From thereon, the film avidly embraces its sci-fi underpinnings as Renee intuits her role in a new world order.

Smart with its questions, less so with its answers, Rupture will cater to an audience somewhere between diehard genre fans and arthouse enthusiasts.
Posted by Michael Guillen at 7/16/2016 09:18:00 AM