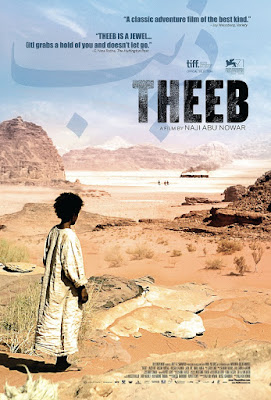 As the opening credits roll, we hear a father speaking to his son Theeb ("Wolf"): "He who swims in the Red Sea cannot know its true depth. And not just any man, Theeb, can reach the seabed, my son. In questions of brotherhood, never refuse a guest. Be the right hand of the right when men make their stand. And if the wolves offer friendship, do not count on success. They will not stand beside you when you are facing death." 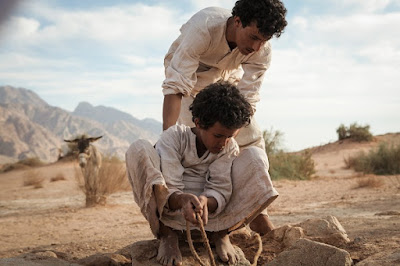 We realize swiftly that these are the words of a recently-deceased Bedouin sheik from the western province of Hejaz, a near-forgotten corner of the Ottoman Empire, and that events are taking place in 1916 during World War I. We watch his elder son Hussein (Hussein Salameh Al-Sweilhiyeen) take on the responsibility of raising and mentoring his younger brother Theeb (Jacir Eid Al-Hwietat), who would rather tussle and play mischief than learn how to properly draw water from a well. Both non-actors, these two young men portraying Hussein and Theeb display an engaging, natural, heartfelt bond, confirming Bresson's supposition that a spiritual component resides in non-actors, absent in professionals. Their performances are absorbing and believable.

It also falls to Hussein to honor and maintain his late father's reputation. As per Bedouin custom, he must offer shelter to two strangers, a British Army Officer and Marji, his translator, who emerge ominously out of the darkness and are led to the light of the camp fire. The Officer (Jack Fox) is blonde, handsome and arrogant and—to the young Theeb—equally strange and mysterious. At night, Theeb watches the sleeping Englishman wrestle with nightmares.

The Officer insists that Hussein guide him and Marji to a water-well on the old pilgrimage route to Mecca, a well that draws water from the sacred Wadi al-Rummah. Again, to honor the reputation of his father, Hussein complies, knowing that—without his assistance—the strangers will not survive their journey on the old trail, now besieged by rebels and thieves. As Hussein escorts the Officer and Marji into these treacherous territories, Theeb follows and stows away and thus begins—as Jay Weissberg writes at Variety—"a classic adventure film of the best kind, and one that's rarely seen these days."

As beautiful as they are dangerous, the Arabian desert and roseate sandstone canyons of Southern Jordan are stunningly displayed in widescreen grandeur through cinematographer Wolfgang Thaler's elegant, distanced compositions, but Thaler's camera is equally immersive—one can nearly smell the stench of the sulking camels—and in one particularly beautiful visual rhyme, he shows Theeb, now discovered and being argued over, sitting on a cracked silt bed idly edging a stick through the earthen fissures, transitioning to the camels sinuously moving through the bending ravines. This play on perceived scale provided narrative traction via the most economic of segues.

Many reviewers have commented on the similarity of the film's panoramic landscapes with those filmed by John Ford in Monument Valley, thereby allowing descriptions of Theeb as a "Bedouin Western" that "riffs on oater themes", but Variety's Weissberg is quick to distinguish that Theeb is "no Western knockoff but a well-told WWI-era story grounded in Bedouin-specific customs." 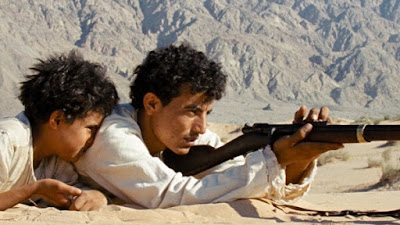 At Slant, Oleg Ivanov provides historical context and socio-political depth: "Theeb opens with a vivid portrait of Bedouin society, particularly the highly formalized rituals of praise and hospitality that mark the arrival of guests and strangers into their midst." Ivanov adds that Nowar has "crafted a nuanced look at the collision of East and West that occurred on the Arabian Peninsula during World War I, the outcome of which would ultimately bring the triumphs and trauma of modernity to the Arab world."

Under Naji Abu Nowar's powerful and assured direction, the anticipated sentiments of a child-in-peril narrative are both confounded and invigorated by unexpected plot twists. Theeb's adventures range from harrowing to heart breaking as the plot pivots in one direction, only to switch back to thrilling initiations that test Theeb's capacity to survive, while—harkening back to his father's last words—he must discover a manhood within himself, beyond his years.

Interviews with Naji Abu Nowar can be found at Cineuropa, Variety and BFI. IMDb. Wikipedia. Facebook.

Opens November 13 at the Landmark Opera Plaza in San Francisco and the Camera 3 in San Jose, and then on November 20 at the Landmark Shattuck in Berkeley.
Posted by Michael Guillen at 11/11/2015 06:58:00 PM