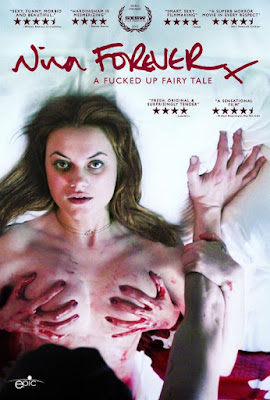 The 12th edition of Another Hole in the Head ("Holehead") kicks off Friday night, November 6, 2015, courting the morbid, the sordid, and the gleefully dark with the Bay Area premiere of Nina Forever (2015) [official site], the debut feature of British brothers Chris and Ben Blaine (who have been recently nominated for the Douglas Hickox Award for Best Debut Director at the British Independent Film Awards 2015, as well as winning the Melies d'Argent at the Lund International Fantastic Film Festival, and audience awards for most original film and best editing at the Toronto After Dark Film Festival). Nina Forever had its World Premiere at the 2015 South by Southwest Film Festival (SXSW), where it was billed as "a fucked up fairy tale." Interviewed by Crave at SXSW, the Blaine Brothers chronicled their difficulty in creating a horror film to satisfy horror fans without capsizing into camp, keeping the tone believable enough for audiences to relate to characters beset by supernatural circumstances. In their conversation with Marc Savlov for The Austin Chronicle, Ben Blaine emphasized that they did not want to ask permission to make a film; instead, they made the film they wanted and invited others to become involved in the process.

Critical involvement has been high. At Crave, William Bibbiani writes: "There's nothing like it, really. It's a unique exploration of horror, love and loss. It's a sexy, funny, morbid and beautiful film for horror lovers with a heart, and romantic audiences with a dark side. Nina Forever digs up your skeletons, lays them out on the bed and dares you snuggle up. Take the offer. Trust me." At Bloody Disgusting, Patrick Cooper claims Nina Forever is "ridiculous and emotionally affecting all at the same time ... delightfully morbid ... sure to satisfy even the most twisted horror fans." At Indiewire, Oktay Ege Kozak adds the film is "fresh, original, and surprisingly tender." And at its Canadian premiere at Fantasia, Mitch Davis synopsizes in his program capsule: "Nina Forever is a gloriously individualistic film. It is equal parts an unconventional, deadpan comedy and a sorrowful examination of grief and the various ways we mourn romantic loss, woven with a dreamlike atmosphere that evokes a hypnotic sense of sleep-paralysis. As outrageous as its concept is, this is a devastatingly beautiful film that gracefully balances tones and never loses emotional credibility amidst its witticisms. Poignant, sexy and uncannily well-scripted and performed, it mines poetry and astoundingly dark laughs from the struggles of moving on from the kind of tragedy that offers zero possible closure." 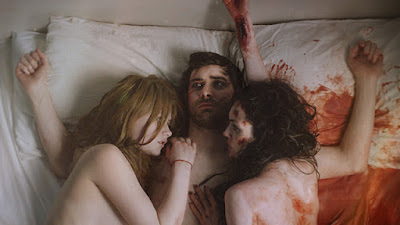 "Don't even mention the word 'closure'," a bloody Nina (Fiona O'Shaughnessy) cautions Holly (Abigail Hardingham) when she catches her having sex with her ex Rob (Cian Barry) at her gravesite. You heard me right. Rob and Holly are bumping uglies right beneath Nina's tombstone. Nina, killed in a gruesome car accident, has left behind a grieving boyfriend who is trying to move on by becoming involved with Holly. The problem is that whenever Rob and Holly have sex, Nina drenches the bed sheets with blood as she lifts her broken and bloody body to observe and ridicule.

Nina Forever offers a ménage à trois like no other as it argues for death being the ultimate aphrodisiac. It's the edgiest threeway—not only for blurring the line between necking and necrophilia—but, also, for situating itself right at the bloody edge of the death horizon or, as Rob phrases it, "a field with a broken fence." There's some insightful and meaningful pillow talk taking place on these bloody sheets, which—in a droll, practical, if alchemical impulse—shift from white sheets, to red, to black. 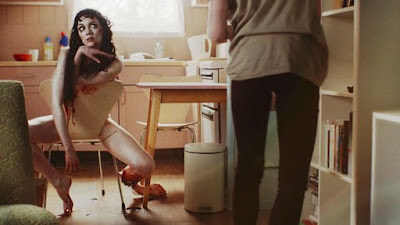 As an event horizon, Death exerts a gravitational pull on living survivors. But we're not talking about a haunting here; we're alluding to a revenant who crosses over into the physical world, blood and all, spreading grief like contagion. Still, even though Nina might be dead, she's kept her standards and is critical of Rob's failed attempt at suicide, his abandonment of his doctoral pursuits, and his relationship with Holly, whose primary concern of not wanting to appear too vanilla, evaporates swiftly the moment Nina makes her first appearance. Especially intriguing is how Holly takes to Nina, even as Rob freaks out that she keeps showing up during their sex. Training as a paramedic, Holly seems almost comfortable with this field and its broken fence. She keeps patients close to death alive, as equally as she keeps the dead present and close at hand. In its sophisticated and horrific exploration of coming to terms with loss, Nina Forever subverts its genre to achieve something sublime.

Nina Forever benefits from an intercut narrative that compresses the before and after in a seamless time stream that compels traction. It also employs a judicious use of cyber-decoupage by layering and texturing the visual field with text messages. And its soundtrack, supervised by Vicki Williams, deserves a special nod for being both lively and thoughtful, with such standout tunes as Adam Faith's 1963 "What Now?" and Noel Gay's 1933 "Letting in the Sunshine."