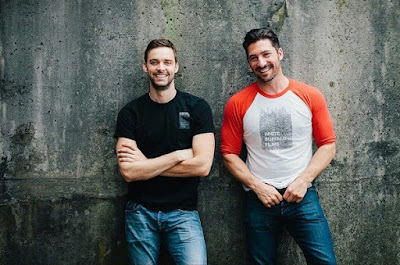 Shane Twerdun and Andrew Dunbar are no strangers to Canadian independent film. Twerdun has been working behind camera on sound and electrical for short films since at least 2006, as cinematographer since 2007, and as screenwriter since 2012; but, first came to my attention as the lead actor in Larry Kent's Exley (2011). Dunbar's background is equally varied, including TV stints on Battlestar Galactica, SGU Stargate Universe and Arrow. Between the two of them they share over 20 years of professional experience, joining forces in 2009 to establish White Buffalo Films, which creates "brave original stories" for the genre circuit.

When asked, "Why White Buffalo?", Twerdun responded: "The reason we're called White Buffalo is a bit of an esoteric one. I was in Northern BC around Squamish on a traditional Indian sweat with a medicine man and local chief and he took the group through a vision quest to find our spirit animal. After half a day in a sweat lodge (teepee) in the middle of October I saw a White Buffalo charging through the plains. I came back after the trip and told Andrew about it and White Buffalo Films was born. The White Buffalo signifies progress and prosperity and harmony and is rare and majestic. That's what we're going for." White Buffalo Films' production signature offers lean narratives buttressed by honest, symbiotic performances from a talented ensemble that share production duties for each others' films. The team dynamic is admirable.

They began by shooting a documentary about Larry Kent (Are You With Me?), which they've worked on for six years and are only now in the process of cutting, followed by a couple of films that never really got out there; films that they, in effect, "sharpened their teeth on" (Hastings Street, Two Married People). Most recently, Twerdun and Dunbar rallied with Larry Kent to put out She Who Must Burn (2015), which had its World Premiere at Fantasia 2015 and its U.S. premiere at the 12th edition of San Francisco's Another Hole in the Head Film Festival. Not only did they both act in She Who Must Burn, but Twerdun co-wrote and Dunbar helped produce. 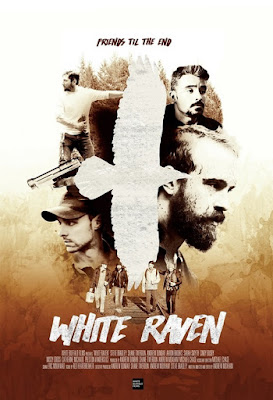 At Variety, Dennis Harvey categorized the film as "strong meat, unabashedly melodramatic but also direct and harrowing enough to feel credible." Harvey's trade review arrived just in time to celebrate White Buffalo's double-bill at this weekend's Blood in the Snow (BITS) festival where She Who Must Burn will have its Toronto premiere just before the World Premiere of White Buffalo Films' most recent venture: White Raven (2015).

Andrew Moxham—who played Mac, the handsome deputy sheriff struggling to protect his wife in She Who Must Burn—claims the director's chair for White Raven along with screenwriting, cinematography and editing credits. In David Bertrand's exclusive Shock Til You Drop interview with Moxham for White Raven's BITS premiere, Moxham admits that wearing so many hats—though "less of a collaborative style"—is "definitely more efficient."

Bertrand observes that White Raven "is thick with a sense of dread from beginning to end", a "steady drunken march to doom" that's never derailed by "cutaways, left field twists, or cinematic ambiguity." This relentless forecasting gave She Who Must Burn its narrative traction as well, so Toronto's BITS audience will have a rare opportunity to recognize White Buffalo's signature through-line between these two feature films, programmed back-to-back.

White Raven concerns itself with four men—Dan (Twerdun), Kevin (Dunbar), Jake (Aaron Brooks), and Pete (Steve Bradley)—long-time friends who hook up for an annual camping trip into remote wilderness; but, something's off. Their joking camaraderie, mock punches and beer shotgunning, is framed as evasive behavior from the get-go. "Men don't really talk to each other," Dan admits as all four guise troubles they're having at home, particularly Pete who the other three begin to notice is acting weirder than usual. As it becomes apparent that Pete is mentally and emotionally unhinged, their fun getaway weekend becomes one they want to get away from. 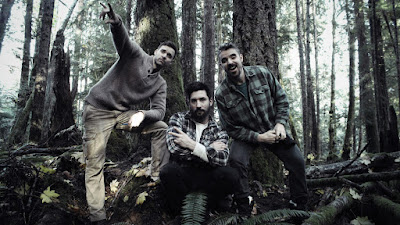 When Shane Twerdun first offered me an advance opportunity to view White Raven, he explained: "We wanted to make a film about a certain part of male culture. Men who refuse to grow up, are unable to communicate, and treat life like one big party without consequences. As a culture right now there seems to be a lot of young men who are just aimless, yet entitled." My take on that would be that—though we live in a mediated and commodified culture where such behavior is readily more noticeable—men refusing to grow up has psychological precedent going back generations, undoubtedly even before the so-called birth of psychology. In Jungian parlance, in fact, such behavior is grouped under the archetype of the puer, the eternal child, and can be recognized by an unwillingness to commit in relationships that leaves emotional devastation in its wake (shown succinctly in the film's opening sequences as the men spar with their respective partners), plus an uneasy avoidance of yet another archetype, the Shadow. The most famous puer story remains that of Peter Pan who, one might recall, is constantly trying to escape his shadow. 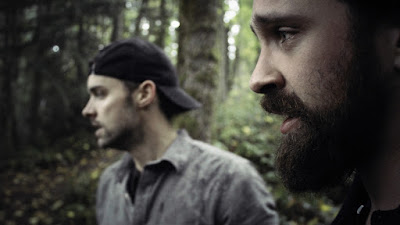 Light and shadow thus become the presiding visual dyad of White Raven, which scripturally incorporates Pacific Northwest Native American lore concerning a white raven who steals light (i.e., differentiates consciousness) from an old man who punishes the raven by burning him in a fire and turning him black. Early on their trek, and again here and there, the men spot a white raven in the woods and Pete ominously suggests, "If you see a white raven you're in a part of the world where the light can't reach." Only men avoiding their shadows could ignore the darkness they're rapidly approaching. Or, as Shannon Page notes in review at Wylie Writes: "the film shreds apart conventional notions of the healing capacity of nature, isolation, and booze." Darkness prevails, no matter how much you try to escape it through whatever means. Or as Bertrand synopsizes: "White Raven is a savagely honest thriller about dependency, aimless stunted manhood and the gasping illusion that a soul can be cleansed through isolation, alcohol and violence." 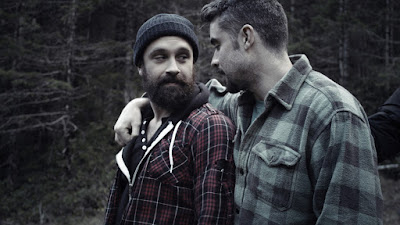 The film is layered with yet one more stylistic element worth noting and that's a haunting choral score by classically-trained mezzo soprano Red Heartbreaker who lays down multiple tracks of her voice to create a suggestive gendered critique of the drunken masculine shenanigans taking place deep in the dark woods, even as it simulates the voices of the trees that the troubled Pete hears in his head.
Posted by Michael Guillen at 11/27/2015 02:03:00 PM