The San Francisco Film Society (SFFS) concludes its ambitious 2015 Fall Season this weekend with French Cinema Now, a four-day, 11-film mini-fest whose line-up ranges from Cannes champions to under-the-radar indies to an animated box office behemoth. The festival's eighth edition is also notable for the fact that nearly half its entries were directed by women. Here's a subjective primer on the promising choices available to local Franco-cinephiles this Thursday through Sunday at San Francisco's historic Vogue Theatre. 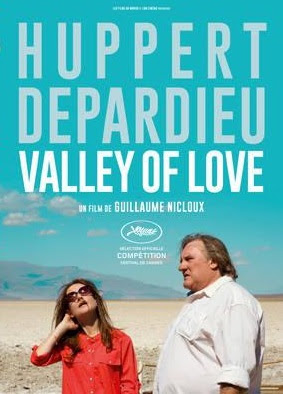 If I could only partake in one day of FCN2015, I'd choose Sunday's quadruple bill that begins with Guillaume Nicloux' Valley of Love. This Cannes competition contender boasts Isabelle Huppert and Gérard Depardieu, co-starring for the first time since Maurice Pialat's Loulou in 1980 (the year Huppert also appeared in Heaven's Gate). The iconic duo plays ex-spouses on a pilgrimage to Death Valley at the behest of a son who committed suicide. Their characters are famous French actors named Isabelle and Gérard and said son has promised to "appear" if they follow explicit instructions he left in a letter. Reviews for Valley of Love were decidedly mixed, with critics uneasy about the film's—as Variety's Guy Lodge put it—"muddling of the metaphysical with the just plain meta." Critics did agree that the immense charms of watching Huppert and Depardieu's reunification, coupled with the spectacular Death Valley scenery trumped most misgivings over the movie's specious spirituality. Depardieu's performance was particularly singled out for accolades. After this year's impressive turn in Abel Ferrara's Welcome to New York, perhaps it's time to once again take this guy seriously and blot out the bloated lout we've observed pissing in planes and pandering to Putin.

I have two other reasons for highly anticipating Valley of Love—Death Valley is my third favorite place on the planet, and I recently had the chance to watch director Nicloux's two previous features. Both were compelling for different reasons and now I'm very curious to see what he's done next. Unfortunately, neither The Nun (in which Huppert has a supporting role as a horny Mother Superior) or The Kidnapping of Michel Houellebecq, a comically fabricated documentary about France's gadfly writer / intellectual, have ever screened in the Bay Area. Fortunately both are available on Netflix streaming, providing ample ammunition against the whiners who claim Netflix' library is all crap. 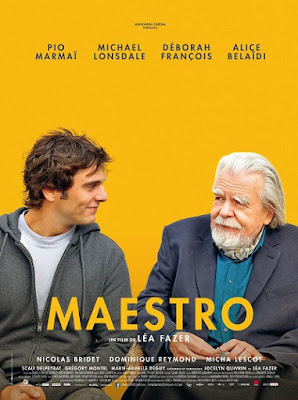 Sunday's FCN roster continues on a meta tip with Léa Fazer's Maestro, which riffs on the production of the final film by French auteur Eric Rohmer (here renamed Cédric Rovère). The script is based on the experiences of Jocelyn Quivrin, an immature and struggling young actor who struck up a mutually edifying friendship with 86-year-old Rohmer during the filming of 2007's pastoral costume drama, The Romance of Astrea and Celadon. (Quivrin died in a 2009 car accident at age 30, followed by Rohmer the following year). Quivrin's character is played by Pio Marmaï, who has become one of my favorite French actors and is certainly no stranger to SFFS audiences. I first took note of him five years ago as the sexy drug trafficker in Living on Love Alone (SFIFF2011), followed by acclaimed appearances in Aliyah, Nights with Theodore (SFIFF2013 FIPRESCI prize-winner) and last year's FCN opening nighter Paris Follies (playing Isabelle Huppert's side dish). Resurrecting the memory of Rohmer / Rovère is venerable veteran Michel Lonsdale, with another personal favorite, Déborah François (The Child, The Page Turner, Populaire) in a supporting role as Quivrin's imagined co-actor/love interest. 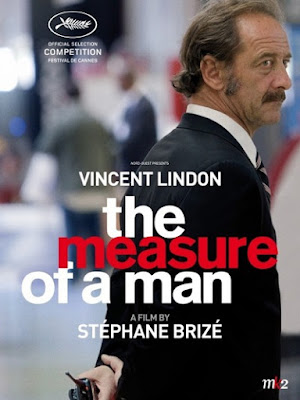 Situated in Sunday's third timeslot is the FCN movie I'm most dying to see, Stéphane Brizé's The Measure of a Man. It won the best actor prize at Cannes for Vincent Lindon in a performance Variety's Scott Foundas called "a veritable master class in understated humanism." Like Pio Marmaï, Lindon has been a fixture for FCN audiences in films such as The Moon Child and Welcome. Here in the U.S. he's best recognized as the married building contractor who falls for his son's homeroom teacher in Mademoiselle Chambon, a work that was also directed by Brizé (and which played for several months at Landmark's Clay Theatre back in 2010). In this outing with the director, who also co-wrote the screenplay, Lindon portrays a laid-off factory worker struggling to support his family before finally finding work as a big-box store security guard. That new job, however, proves an unending source of personal moral conflict. Shot in long, unbroken takes with a mostly non-professional cast, I'm expecting The Measure of a Man to be the kind of heart-wrenching social drama that seems the exclusive provenance of humanist French-language filmmakers like the Dardenne Brothers and Robert Guédiguian. 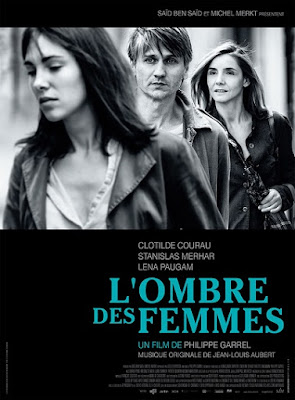 FCN closes on Sunday evening with In the Shadow of Women, yet another messy male / female relationship drama from post-New Wave auteur Philippe Garrel. While I'm not exactly a fan—for me the director's greatest achievement was spawning his impossibly handsome son and sometime collaborator, actor Louis Garrel—I'll jump at any opportunity to catch his films on the big screen. Garrel's protagonist this time out is a documentary filmmaker (played by Stanislas Merhar, the Almayer of Chantal Akerman's Almayer's Folly) whose wife is also his film editor. Over the course of the movie they'll both enter into extra-marital affairs, rendering In the Shadow of Women a pointed examination of the double standard applied to women when it comes to infidelity. The film opened the Director's Fortnight sidebar at this year's Cannes and was well received by critics. Some detected more humor than is usual for a Garrel joint, and others remarked that his debut collaboration with legendary screenwriter Jean-Claude Carrière resulted in a more cohesive and focused storyline. What hasn't changed is the impressive B&W widescreen cinematography and participation of son Louis, who provide off-camera voiceover narration. In the Shadow of Women clocks in at a brisk 73 minutes, making it the perfect film with which to end an exhaustive day of festival-going. 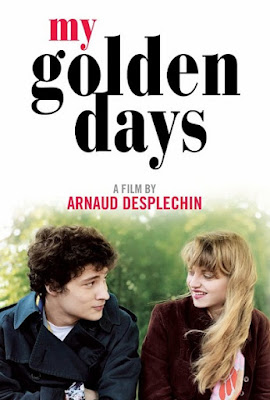 FCN2015 gets started four nights earlier with Arnaud Desplechin's My Golden Days, a prequel to his 1996 film My Sex Life … or How I Got Into an Argument. The movie premiered in Cannes' Director's Fortnight to solid raves, with Variety's Justin Chang calling it "some of the most fluid, emotionally resonant filmmaking of Desplechin's career." A handful of critics even decried the fact that it hadn't screened in the fest's main competition, unlike his two previous works, 2013's wrongly maligned Jimmy P with Benicio Del Toro (never screened in the Bay Area but available on Netflix streaming) and my personal Desplechin favorite, 2008's A Christmas Tale. My Golden Days takes the characters originated by Mathieu Amalric and Emmanuelle Devos in My Sex Life and re-imagines them as teenagers, now played by non-professionals Quentin Dolmaire and Lou Roy-Lecollinet. Amalric is on hand to reprise his character in several scenes as well. 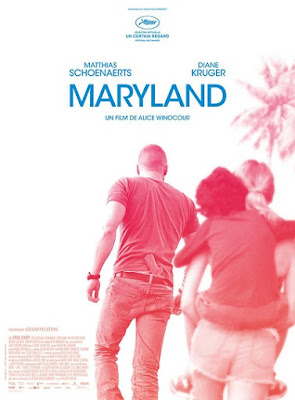 As chance would have it, the final films on Friday and Saturday night both concern themselves with PTSD-stricken Afghanistan war veterans. Both are also directed by women. Described as a "character-driven home invasion thriller," Alice Winocour's Disorder is that rarest of animals, a female-directed genre film. Belgian heartthrob Matthias Schoenaerts (Bullhead, Rust and Bone) stars as an ex-soldier turned bodyguard hired to protect the trophy wife (Diane Kruger) of a shady Lebanese businessman. Disorder is Winocour's follow-up to her 2012 feature debut Augustine, which looked at the treatment of female "hysteria" in 19th century France. (Winocour also co-scripted Mustang, the Turkish film that now oddly finds itself France's Oscar® submission for this year's Best Foreign Language Film). Disorder premiered in Cannes' Un Certain Regard sidebar to positive reviews, with a number of critics singling out the film's nerve-jangling sound design for special praise. 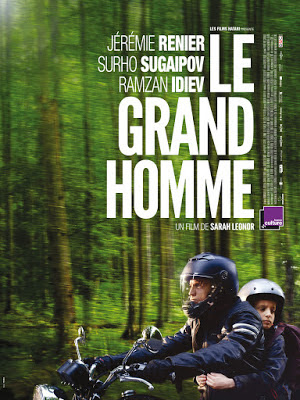 The Afghanistan war vets at the heart of Sarah Leonor's The Great Man are recently returned French Legionnaires, one a Chechen immigrant who enlisted so he'd have a shot at French residency (newcomer Surho Sugaipov) and the other his best friend (the always memorable Jérémie Renier) whose life he saved when the two were out on an illegal mission in Afghanistan. Now back in Paris and living a marginalized existence, the Chechen is killed, compelling the friend to raise his young son. The Great Man premiered at Toronto in 2014, winning kudos from the New York Times' Manola Dargis, who called it "an emotionally affecting, political exploration of identity, trauma and the limits of empathy…so suffused with generous humanity that you're never sure who the title actually refers to." Director Leonor, whose previous film A Real Life played FCN in 2010 (and also proved to be the final screen appearance of Guillaume Depardieu) is expected to attend Saturday night's show. 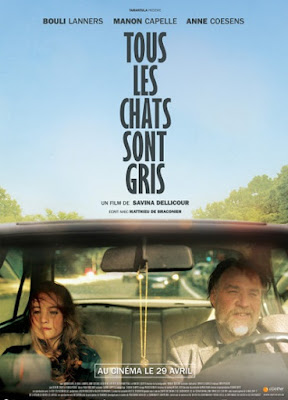 Two additional FCN2015 films directed by women are Savina Dellicour's All Cats are Grey and Sophie Letourneur's Gaby Baby Doll. The former stars bear-ish Belgian actor / director Bouli Lanners (Eldorado, The Giants) as a detective hired by a teenage girl to help find her unknown father. As it turns out, he doesn't have to look far. The film is a feature adaptation of Delicour's identically titled 2009 short. Then in Gaby Baby Doll, Lolita Chammah plays a flighty libertine who can't stand being alone, setting her romantic sights on a reluctant rural recluse played against type by pop singer / actor Benjamin Biolay (a familiar face to FCN attendees from such films as Stella, Bachelor Days are Over and last year's The Easy Way Out). Chammah is also known for being Isabelle Huppert's daughter, with whom she starred in FCN's 2010 opening nighter, Copacabana. Rounding out this year's FCN roster are two completely disparate works. Jean-Paul Civeyrac's My Friend Victoria explores race and class via an episodic tale of one French-African woman's ambivalent and shifting relationship with a bourgeois white family. The Doris Lessing short story from which it is based was originally set in London. Last but not least, there's Asterix–Mansion of the Gods, an animated feature that was a French box office smash last winter. Set in 50 B.C. and based on the wildly popular Belgian comics—the series' 34 books have sold over 300 million copies worldwide and been translated in over 100 languages—this 13th Asterix film adaptation was co-directed by Louis Clichy and Alexandre Astier. Clichy, a former Bay Area resident who worked on Pixar Studio's Wall-E, Ratatouille and Up is expected to be a special guest at Saturday afternoon's screening.