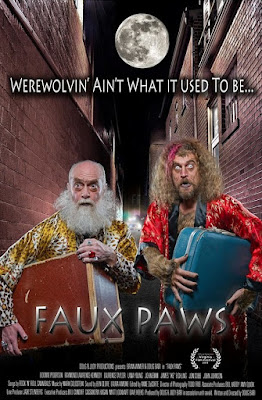 When we first see Brian (Brian Wimer) pacing in his cell, nervously trying on one outfit after the other, we clue in pretty quickly that he's gay, and shortly thereafter—in dialogue with his wooly-bearded partner Doug (writer / director / actor Doug Bari)—that they're both werewolves. An introductory headlines montage reveals how werewolves were discovered among the public sector, how their saliva proved to have healing powers, and how they were subsequently exploited, rounded up and incarcerated in lycanthrope reservations. Maine is the only state in the union with a sanctioned tolerance of werewolves and so Brian and Doug escape from the reservation and embark towards freedom on a road trip that allows them a detour to visit Brian's family who—though aware that Brian is a werewolf—don't know he's a "faux paw"; i.e., a gay werewolf, and that his partner is old enough to be his father.

Faux Paws (2013) might sound cringingly simplistic at first, and requires some patience getting into its languid rhythm, but it slowly unfolds into an unpretentious and charmingly droll tale, with situations that are ridiculously amusing. A funny bone for your inner lycanthrope to gnaw on, Faux Paws also suggests that the family that brays together, stays together. But if you're expecting Taylor Lautner and his gang, you're in the wrong multiplex. Faux Paws' script (and undoubtedly its budget) goes in an altogether different direction or—as the film's poster itself attests—"werewolvin' ain't what it used to be."

The first third of the film shows these bickering gay werewolves on the lam and sets up a back story of how Doug met Brian as a young pup. This intergenerational erotic has served to socialize Brian with the fact that he's a faux paw, and though it might all seem silly and inconsequential, I have to give a shout-out to Bari here for tackling what is an almost taboo subject, even within gay circles. I mean, look how Christopher Isherwood and Don Bachardy were treated by their peers, let alone straights. And consider how narrow-mindedly homophobes perceive such an interaction as predatorial recruitment. When Brian's own sister meets Doug, she pulls no punches in voicing the "creep" factor that Doug is old enough to be Brian's father. But this is the point: admittedly moreso in the past than now, young gays had no social role models to help them individuate and become mature gays and an intergenerational romance often became the means by which a young gay male learned "the code." But what is particularly touching in the relationship between Doug and Brian is how Doug has passed his prime just as Brian is coming into his. There's a tender commitment written between the lines here that I find affecting, satisfying and—no matter where one stands on the intergenerational issue—admirably honest. 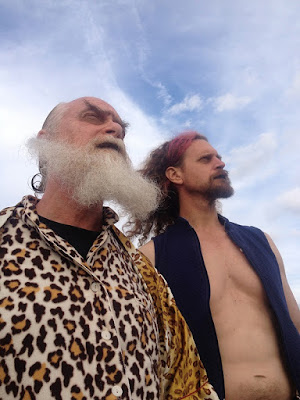 Likewise, I'm equally pleased that the two actors don't resort to stereotypical lisping or simping to articulate their gay characters and to achieve the film's intended humor. Male vanity is on display, yes, both are constantly concerned with their appearance—what to wear, how to fix their hair—but, otherwise, these are two surprisingly normal guys, weird as they might be, who are incidentally gay and werewolves. Well, "normal" might be stretching it a bit. Doug has the bug-eyed vibe of Christopher Lloyd's Doc Brown and the endearing habit of hiding joints within his wooly beard and Brian really shouldn't be baring his midriff.

Faux Paws also speaks to how genre forms can be used to contain socio-political concerns in ways that are entertaining rather than didactic. For example, look at the many ways that zombies and vampires, let alone werewolves, have been used to express multiple social concerns ranging from consumerism to racism to sexism. This simple, funny film is way more sophisticated than it admits on the surface. Homophobes continually argue that gays are nothing short of animals, which becomes the droll running joke of this movie because these gay werewolves, "faux paws", might be animals, yes, but they spend more time worrying about their wardrobe, how to bake a strawberry rhubarb pie or how to make perfect kettle corn. Further, there's a certain precedent to acknowledge here. The melding of gays with werewolves has pre-Christian roots in the vargr-argr tradition and, later, with the Germanic berserks.

The film begins to really kick in when Doug and Brian stop to visit Brian's family. Brian's "coming out" involves allowing his family to watch him "change" during a full moon, which is a wry comment on acceptance as a family value (and executed in a no-nonsense, low-budget way with tufts of hair here, tufts of hair there, and a couple of la de das). Brian's Mom (Boomie Pederson) and Dad (Raymond Lawrence Kennedy) love their son unconditionally, which is lovely to see, and though Brian's sister Joyce (Lana Young) has some issue with Doug being so much older than Brian, she warms up to the duo as well. Joyce's son Daniel (Laurence Taylor), Brian's nephew, emerges as the comic discovery of this ensemble. His enthused reactions to his unquestionably weird uncles is infectious and delightful and reflects the attitudes of many young people today that the gay thing, even the gay werewolf thing, doesn't really matter. However, when Brian changes, he does scratch Daniel, which is not cool, and their reconciliation scene is oddly sweet and spot-on appropriate.

It's Daniel's step-father Bill (John Emm) who complicates this family get-together with his conservative prejudices. Like the film's other faux-paws bashers, he's prone to chanting: "They're here, they're were, don't get used to it." He violates the family bond by conspiring with the national police forces giving chase and a pair of redneck bounty hunters Barney (John Johnson) and Tank (James "Ike" Eichling). Tank sports a "Jesus Wept" tattoo smack dab on his forehead in case you had any question identifying his hillbilly fundamentalism. Barney and Frank hate "were-huggers" and collude with Bill to do harm to Doug and Brian; but Brian, empowered by changing in front of his family, steps in to save the day, which underscores the film's essential moral, voiced by Doug when he tells Brian: "You're not just a faux-paw; you're a werewolf." Which is to say that—as much as homophobes want to believe that gays aren't really men—they are, and moreso.

I can't even imagine the difficulty Faux Paws will have promoting itself on any festival circuit, whether genre or LGBTQ. It's subversive both in subtle and smack-in-your-face ways. But I'm grateful, as ever, that Holehead gamely takes this film on for its audience and hopeful that audiences will accept this film with the respect and enjoyment it rightfully deserves. Doug Bari is expected to be in attendance at tonight's West Coast premiere.
Posted by Michael Guillen at 11/07/2015 10:54:00 AM