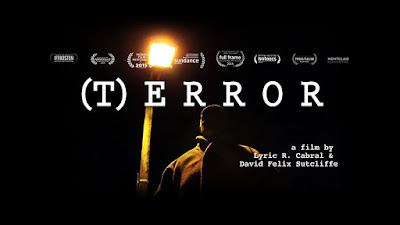 (T)error (2015, USA, dirs. Lyric R. Cabral, David Felix Sutcliffe)—Surveillance (as previously noted in my entries for Slumlord and Observance) continues to be a trending theme in narrative horror films, but can there possibly be anything more terrifying than the real thing, especially when conducted by a government agency like the FBI in the name of homeland security? David Felix Sutcliffe is no stranger to the subject. As noted in his IMDb bio, Sutcliffe “is an independent documentary filmmaker whose work explores issues of national security and civil liberties in the post-9/11 era. In 2013, he was included in Filmmaker Magazine's annual list of ‘25 New Faces of Independent Film.’ His 2011 film, Adama, was broadcast on PBS, and featured the story of a 16-year-old Muslim girl growing up in Harlem who was arrested by the FBI on suspicion of being a ‘potential suicide bomber.’ His follow-up film (T)error, co-directed with acclaimed photojournalist Lyric R. Cabral, … debuted at the 2015 Sundance Film Festival where it won a special jury prize for Break Out First Feature. Along with (T)error co-director Cabral, Sutcliffe was honored by the Tribeca Film Institute with the 2013 Creative Promise Award.” The film also received the Reva and David Logan Grand Jury award at this year’s Full Frame Documentary Film Festival.

With such credentials in place, I’ll accept Sutcliffe’s synopsis on his own terms: “(T)error is the first documentary to place filmmakers on the ground during an active FBI counterterrorism sting operation. Through the perspective of ‘Shariff’, a 63-year-old Black revolutionary turned informant, viewers get an unfettered glimpse of the government’s counterterrorism tactics and the murky justifications behind them. Taut, stark and controversial, (T)error illuminates the fragile relationships between individual and surveillance state in modern America, and asks who is watching the watchers.” 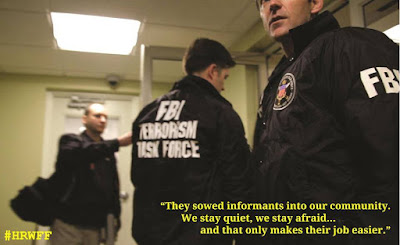 It, perhaps, goes without saying but often it’s filmmakers who are watching the watchers (think CitizenFour, whose director Laura Poitras served as a creative consultant on this project). A documentary as highly-lauded as (T)error has been on festival track is cause for hope that the FBI will eventually be held accountable for the errors made in their war on terror (as cleverly conflated in the film’s title). As Sean P. Means nails it at the Salt Lake Tribune: “It's the sort of movie around which congressional investigations are, or at least should be, built.” On a grass roots level, the filmmakers’ concerted effort to mobilize audience engagement has resulted in their association with Project C.L.E.A.R., which is well worth checking out. Official website. IMDb. Wikipedia. Facebook.

Ariel Esteban Cayer is equally articulate in his program capsule for Fantasia: “The intimate, unprecedented portrait of a covert FBI informant, Cabral and Sutcliffe’s debut film (T)error is a tense and upsetting documentary tour-de-force. Connecting the dots of the FBI’s long history of domestic operations, from COINTELPRO’s war against the Civil Rights and black nationalist groups of the 1970s to the current, post-9/11 regime of preemptive strikes and rampant domestic espionage, (T)error … unfolds like a psychological thriller, and amounts to a stark, bold perspective on the never-ending War on Terror (both real and manufactured); an up-close look into the FBI’s deceptive methods for assuring national security at the expense of privacy, freedom of belief, and the individual lives shattered in their wake.”

Kudos to Fantasia for including a hard-hitting investigative documentary like (T)error in their line-up, which serves as an obvious reminder that genre films bear a vital importance for inflecting the dread and anxiety felt by individuals towards social forces over which they have no control. Horror films are often mistakenly reduced to mere entertainment and diversion, when in fact they bear a cultural value in the public sector for expressing justified dread seeking articulation and redress.