FANTASIA 2015—THE DARK BELOW 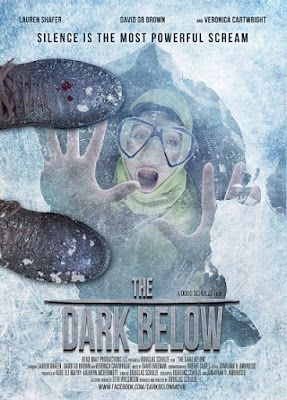 The Dark Below (2015, USA, dir. Douglas Schulze)—With only one line of dialogue (“Love is cold”), Douglas Schulze delivers a harrowing aria of feminine survival through evocative visual storytelling reminiscent of the slo-mo prologues of recent Lars von Trier films, with flourishes of Stanley Kubrick for added citational texture. Rachel (Lauren Mae Shafer) is overpowered and abducted by a man (David G.B. Brown) who immobilizes her with injected drugs while he suits her up in ice diving gear, and drops her into a hole he’s hacked out of a frozen lake. With sadistic precision, he clearly intends for her to die slowly and torturously. As the ice seals above her, Rachel has to figure out how to survive, while piecing together the shocking revelations that have, perhaps predictably, brought her to this life-threatening situation. Struggling not to succumb to frostbite and numbing hypothermia, the arduous physicality of Shafer’s performance is impressive.

Without giving away the film’s reveals, The Dark Below harkens back—as Ian Olney has laid out in his essay “Dead Zone: Genre, Gender, and the ‘Lost Decade’ of Horror Cinema, 1946-1956” (published in Recovering 1940s Horror Cinema: Traces Of A Lost Decade. Eds. Mario Degiglio-Bellemare, Charlie Ellbé, and Kristopher Woofter, Lexington Books)—to a precedent of post-war movies of the 1940s that “tell women’s stories that are addressed to women. It is masculinity that is shown to be monstrous. Female protagonists must match wits with male villains—typically patriarchal authority figures like fathers, husbands, or guardians—who plot to deceive, entrap or murder them.” (2015:50-51)

The Dark Below becomes, then, a hyper-stylized melodramatic allegory of the conflict between the woman as protagonist and the man as antagonistic monster. As Olney continues: “Postwar horror films do not simply feature female protagonists doing battle with male villains, however; they also frequently invite us, via a variety of cinematic devices to identify with their heroines, to adopt a female gaze.” (2015:51)

Cinematographer Robert Skates accomplishes this in The Dark Below by submerging us into the water and under the ice with Rachel so that we intimately share her frantic desperation. Further, David Bateman’s intense orchestral and choral compositions underscore Rachel’s panic, while Jonathan D'Ambrosio provides an edited point of view through Rachel’s flashbacks and revelations. Determined to survive, Rachel is motivated by revenge, which has never been served icier than in this experimental thriller that formally challenges the conventional boundaries of genre. Fantasia correctly asserts: “You haven’t seen anything like it.”

One final alignment with Olney’s thesis is that—even as the female protagonist is valorized for confronting the monstrous-masculine, she does not do this alone. Instead, she fights the male monster with the help of another woman, as it is “only in collective feminist action” that there might be hope for success. (2015:55-56)

This is where Veronica Cartwright, who plays Rachel’s mother, squares off to the aggressor with a gaze as fierce and protective as a lioness. This casting coup has assured the film credence and pedigree, as Cartwright—a genre icon in her own right since as early as Hitchcock’s The Birds (1963), through Ridley Scott's Alien (1979), onto TV’s The X-Files (1998-99)—has proven her unerring eye for choosing intelligent properties, no less here in The Dark Below. As Rachel’s mother, she and Rachel, and Rachel’s daughter form the collective feminism that will never stop glancing over their shoulders, fearful of masculine threat. World Premiere. IMDb. Facebook.