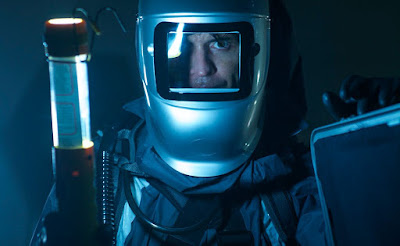 Synchronicity (2015, USA, Jacob Gentry)—With its stylish evocation of Ridley Scott’s Blade Runner (1982), homage becomes—for genre fans, at least—a form of time travel. However, Synchronicity is less a replicant than its own atmospheric application of noir aesthetics to a sci-fi narrative about time looping through parallel universes. Although we’ve seen this premise before with such films as Timecrimes (2007), Looper (2012) and Time Lapse (2014)—and the requisite effort to bring compromised timelines back into alignment—Synchronicity admirably maximizes the bang for its buck and delivers an elegantly-mounted puzzler with swank art direction by Jenn Moye that looks like it was created with a considerably heftier budget, bolstered by Ben Lovett’s melancholic score that recalls Vangelis without losing its own significant character.

Jacob Gentry, who contributed direction to the braided narrative The Signal (2007), goes solo and—taking a further cue from Code 46 (2003)—ingeniously utilizes the Atlanta architecture of John C. Portman, Jr., whose neofuturistic designs work perfectly as the urban backdrop for this story of physicist Jim Beale (Chad McKnight) who has invented a time machine that uses wormholes to navigate the time-space continuum. The story shades noir when Beale becomes a chump for femme fatale Abby (Brianne Davis) who uses her wiles to woo secrets from him about his invention to satisfy the corporate greed of venture capitalist Klaus Meisner (in a menacing, measured performance by genre alum Michael Ironside).

McKnight’s disheveled masculinity generates erotic tension set against the seductive precision of Davis. A bigger budget and potentially longer shooting schedule might have afforded the opportunity to explore slight variances in McKnight’s characterization of Beale, which could have strengthened the concept of multiple dimensions by subtly differentiating them; but, even absent such subtlety, McKnight’s performance remains compelling. As the physicist traveling into the past to prevent the theft of his invention, love becomes Beale’s predominant motivation to repeatedly cross time lines seeking alternate results while hazarding unforeseen consequences. The same could be said of the Abby character who is, at turns, a femme fatale and, then again, “just a girl.” Why she chooses to love Beale in one timeline over another is left unfortunately vague.

The central image of the dahlia—an apparent noir citation, either by way of The Blue Dahlia (1946) or the Black Dahlia murders of L.A. (take your pick)—aligns visually in its unfurling structure with the wormhole itself and serves as the catalyst for the film's time jumping. Synchronicity exceeds budget limitations to deliver an intelligent script, focused performances that offset challenges in scriptural continuity, and glossy, good-looking production values that convincingly ensorcel the viewer with its moody, unpredictable universe(s). World Premiere. IMDb.