FANTASIA 2015—SHE WHO MUST BURN 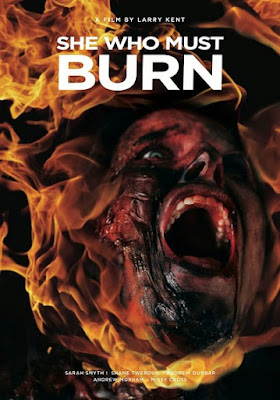 She Who Must Burn (2014, Canada, dir. Larry Kent)—In his introduction to the World Premiere of Larry Kent’s She Who Must Burn (2014), Fantasia programmer Mitch Davis claimed Kent as a national treasure, and described him as the Godfather of Canadian underground film and its first independent filmmaker of confrontational countercultural films. For over 50 years Larry Kent’s movies have given a regional voice to political outlooks that have—as Paul Corupe concurs in his program capsule—“infuriated uptight Canadian cultural guardians.” Theaters had their doors padlocked by censors attempting to keep audiences from watching his 1962 film The Bitter Ash, and when his 1969 film High screened at the San Francisco International Film Festival, then executive director Shirley Temple Black resigned in protest. David Cronenberg has credited Kent as a major influence in his youth. At 82, Kent shows no signs of letting up and returns to Fantasia with what Davis suggests might be his most confrontational film to date.

In full disclosure, She Who Must Burn is a project that Kent has been talking to me about for years. He first pitched a treatment of the story over lunch two years back, and I’ve witnessed firsthand how difficult it has been for him to achieve institutional financing after his crowd sourcing campaigns failed. He would be the first to admit that—were it not for the efforts of Executive Producer Pericles (“Perry”) Creticos (who served as producer on Kent’s 2005 film The Hamster Cage), and the loyal support of his Vancouver associates Shane Twerdun (who helped produce, co-write, and acted one of the main leads) and Andrew Dunbar (also a producer and actor in the film)—She Who Must Burn would never have been made. Include among his supporting contributors filmmaker and Fangoria editor Chris Alexander, who moodily scored the film for Kent.

With its revealing title and even more revealing poster, She Who Must Burn upsets narrative conventions by letting you know straight off what’s going to happen, such that focus lies more in the film’s percolating issues and how they build to achieve suspense. It's a masterwork of signposting and negotiating suspense through anticipation.  An exercise in genre, She Who Must Burn would probably best be categorized as arthouse horror, but exceeds that categorization for skillfully addressing the fact that nothing is quite as horrifying as reality itself. Though a Canadian entry, the sense of the film is an American critique of the fanatical right wing Christian constituencies attempting to destroy democracy’s separation of church and state under the guise of religious belief, emboldened by the fervor of conversion. Who isn’t horrified every morning in the U.S. reading front page articles of fanatics killing presumed “non-believers” in the name of a vengeful God?

In Kent’s harrowing tale, Angela (Sarah Smyth), a counselor at a Planned Parenthood clinic and common law partner of deputy sheriff Mac (Andrew Moxham) infuriates the local pastor Jeremiah Baarker (Shane Twerdun) who believes it is his God-given duty to rape his wife Margaret (Jewel Staite) to fulfill a divine decree to procreate. When he discovers Margaret has taken Angela’s advice to be on birth control, the good pastor goes berserk and beats her viciously. Margaret seeks shelter from Angela who arranges for her to be taken to a safe hiding place. Refusing to reveal his wife’s location, Pastor Baarker and his fanatical cohorts threaten Sarah and her clinic with violent retribution.

As the obsequious, religiously-deranged Jeremiah Baarker, Twerdun does a 180° turn from his previous performance in Kent’s Exley (2011), thereby revealing his significant acting range. Kent, in fact, is well-known for his masterful handling of actors and the ensemble in She Who Must Burn uniformly deliver honest, meticulously paced performances, from the put-upon Angela who seeks to help troubled women with sensible, medical advice to Baarker’s kin Rebecca (Missy Cross) who suffers from postpartum depression, speaks in angry tongues, and receives a vision that God wants Angela to be burned alive. There’s not a false note in any of these performances, nor in Kent’s handling of this controversial subject. One of the members of the pastor’s congregation objects to what the pastor is asking him to do. “I’ve been a religious person all my life,” he says, “and this is not that.” Thus Kent is not trying to set up a kneejerk enmity between Christians and non-Christians, far from it; he is focusing on the danger of fanatical evangelists to the Christian faith, as well as secular democracy.

With the local sheriff unwilling (or unable) to stop the rising tide of violence, and Kent’s admitted atheist position disallowing him to lean on a supernatural solution to his story, Kent instead provocatively suggests a kind of secular martyrdom of health care practitioners dying for their beliefs (not so distant from the midwives and herbalists sentenced and burned alive during the Inquisition witch hunts). What emerges as the most horrifying element of his film is its continuing relevance regarding women having the right to determine the fate of their own bodies, and there’s no question but that She Who Must Burn will agitate militant anti-abortionists and Bible belt patriarchs, particularly in the U.S. All the more reason that this movie should be seen far and wide to remind Americans that civil liberties are under determined assault. World Premiere. Official site. IMDb. Facebook.

For more on the film's origins, production details, and Kent's motivations, check out our in-depth interview with the filmmaker over at OFFSCREEN: http://offscreen.com/view/she-who-must-burn-interview-with-larry-kent

Thanks for the link, Randolph.