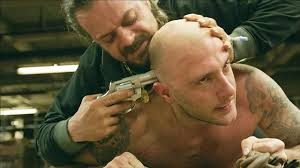 Cash Only (2015, USA, dir: Malik Bader)—Virile, yet vulnerable, Nickola Shreli bears the full weight of this intense crime thriller on his broad shoulders, both in his performance as Elvis Martini and as the film’s scriptwriter. Elvis is written into nearly every scene, which gets no complaints out of me; he’s that riveting and charismatic a character (and actor). Boasting one of the lowest budgets in Fantasia’s line-up, Cash Only (2015) gets high marks for stretching those bucks and delivering an authentic, intimate look at the Albanian-American experience in Macomb County’s Metro Detroit, which statistically has the highest percentage of ethnic Albanians not in Europe. Though not necessarily a pretty purview, it’s surprisingly compassionate, and brings the struggles of this challenged diasporic community square to heart, even at its most hardboiled and ferocious.

Everyone owes someone something in Elvis Martini’s Detroit; he, most of all. The bank’s about to foreclose on the building he owns and operates; his daughter plaintively wonders when her father will be able to afford the tuition that will allow her to return to a private Catholic school to be with her friends; but his tenants keep “working the system” and won’t pay their rent; and—aside from the bank—he owes big money to an unflinching loan shark. Above all, he owes himself some measure of forgiveness for accidentally killing his wife and that’s the debt that seems insurmountable, and one that remains the wounded core of his masculinity. When he’s forced to evict a prostitute tenant from her apartment, he discovers a stash of cash to momentarily set expenses right, only to discover the money is stolen from a mobster named Dino (Stivi Paskoski), one of Detroit’s worst denizens, and Dino will do anything to get his money back. Paskoski’s performance is terrifyingly ruthless. Subtext insinuates Dino’s Serbian, but Cash Only sagely avoids distracting its tense momentum in that geopolitical direction, and keeps its focus on the explosive stand-off between its desperate characters.

Director Malik Bader also provides comic relief as addled pot-grower Kush (who has no friends but an inflatable doll) and deserves well-earned props for eliciting restrained performances from an ensemble bursting at the seams with testosterone. Bader ratchets it down to a perfect, believable pitch. Inspired by Bader’s previous film Street Thief (2006), Shreli contacted Bader cold by email and pitched his script. Three years later, the result is street-smart, credible and—as Matthew Kiernan asserts in his program capsule—“brings something fresh and unique to the genre that hasn’t been seen in a while.” Fans of the early work of Nicolas Winding Refn will appreciate the raw violence on display. I’m already anticipating more dramas from the Bader / Shreli team. World Premiere. IMDb.