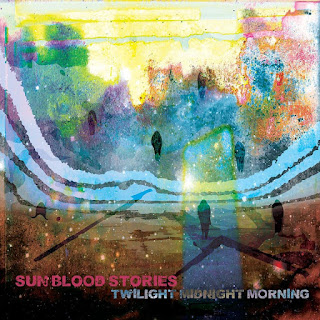 "Put all the images in language in a place of safety and make use of them, for they are in the desert, and it's in the desert we must go and look for them."—Jean Genet.

Boise sits in the southern sagebrush deserts of Idaho, a wavering mirage and seeming refuge from the arid heat that grips the city in late summer, and commensurately a progressive jewel that chafes against the cheap political conservatism associated with the state: like a confident diamond scratching against glass. There's something to be said about the repressive forces of conservatism requiring—in fact, inspiring—a progressive response. Boise's youthful, creative independent music scene provides exactly such a response to the state's embarrassingly kneejerk lockstep politics.

With the first track "Palace Mountain Mirage" on their latest release Twilight Midnight Morning (2015), Sun Blood Stories invites their listeners out into the desert to surf astral sand dunes. Watch out for the androgynes along the way who—shaded and mischievous as all get-out—might seduce you into some sidestep fever dream just to sprinkle glitter in your eyes or paint your fingernails blue. This invitation proves important as—for a while there—I thought we were going to be left behind on the band's post-psychedelia sojourn. With true shamanic responsibility, however, the band has gone "out there" and returned with some truly trippy but accessible tunes in what is admirably their most mature effort to date.

Although members Ben Kirby and Amber Pollard will be the first to tell you they prefer their vocals to stand behind the music, I'm pleased the band has not forsaken their lyrical chops, brought into play with "West the Sun" where Kirby's gravel-rich voice complements Pollard's witchy croons to mesmerizing effect, and likewise with "Found Reasons Found Out", which feels like the haunting memory of wavering sea kelp recalled out in the middle of the desert underneath droning power lines, stark against a black sky glutted with stars. This might be, in fact, the governing aesthetic behind the band's new release: a heady electric mixture between liquidity and drought. A sea splash on sagebrush, if you will. If whispers could be hung up like hammocks between the sharp points of night stars, it'd be easy to lie there, sway in the night breeze, and listen for hours to Sun Blood's intercepted messages from the Milky Way.

With the strong and steady heart of Jon Fust's drumming, Nik Kososik's desultory, dreaming bass, and Judah Claffey's exploratory viola, Sun Blood Stories has engineered a lushly-textured listening experience that flows seamlessly from its opening invitational track, to its final lullaby "Misery Is Nebulous", where a fevered brow is calmed by gentle hypnotism. Night fades away, the cyclic vigil is complete, and—in that space inbetween dream and waking—the listener walks into morning, worn but informed by a deeply shared experience.

With the help of filmmaker Jason Sievers, Sun Blood Stories has released the first video from the collection, "Nigh Tremor", where Pollard's vocals edge towards the husky smoke of whiskey to reveal what she knows in her bones.