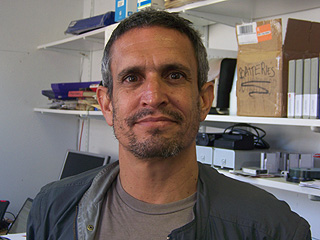 As one of the community co-presenters of Frameline's Bay Area premiere of The Yes Men Are Revolting (2014) [official website], Rachel Caplan—founder and CEO of the San Francisco Green Film Festival—offered by way of introductory remarks her appreciation of the green band in Gilbert Baker's 1978 design for the rainbow flag, which she was delighted to learn intentionally referenced the green of nature. By extension, she appreciated Frameline including the Yes Men's "green" documentary on the threat of global warming into its LGBTQ programming.

Caplan's appreciation underscored this past week's welcome news that Baker's flag has been added to the permanent design collection of New York's Museum of Modern Art. Since 1978, Baker's rainbow flag has become a widely recognized symbol for the gay, lesbian, bisexual and transgender communities and, as stated by MoMA, "The creation of new symbols for a changing world is a significant way for design to give definition and direction to human life, and one of MoMA's goals is to acquire the art of our time." 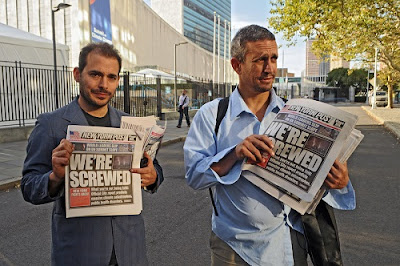 Stressing how amazing it was for him to attend Frameline, Actor/ Director Andy Bichlbaum fondly recalled living in San Francisco for some time, when he would often catch films at Frameline. The Yes Men Are Revolting is the first of The Yes Men's filmic projects that purposely revolves around a gay theme on such a personal level, but is equally a communal film about activist movements in general. Bichlbaum felt it important to remind his audience that the Gay Movement came out of the Rainbow Movement, which (of course) inspired Baker's design of the rainbow flag. Granting that his Frameline audience probably didn't need reminding, he qualified nonetheless that there are still gay groups who forget that we're all part of a struggling movement, and—though we have achieved almost everything that we set out to do, "minus a lot, of course"—it remains the same ongoing struggle. Gay marriage, unthinkable ten years ago, is upon us ("for whatever that's worth, I'm sure"), but it's even more important to remember that it's an achievement that's part of a much larger movement. I, for one, was heartened to hear Bichlbaum opine that gay victories are not the be-all and end-all of socio-political change and to caution against the self-serving complacency that demeans queer achievement. The work doesn't stop just because queers have gained the hallmarks of perceived normalcy.

Perhaps one of the bravest, most intense, scenes in The Yes Men Are Revolting is when Bichlbaum comes out as gay to Ugandan activist Chandia Kodili and her colleagues. "We were driven from the airport when we arrived by a taxi driver who spewed homophobia. He said all these things that you would have heard here in the 1950s, which were all spread there by an American preacher named Scott Lively—the British were also instrumental in modernizing Uganda's homophobia—but Lively has brought it right up to the 17th century. 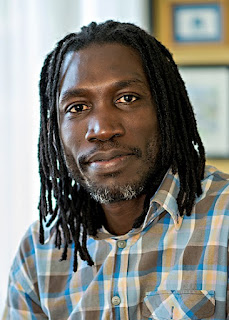 "So this taxi driver was spewing all this stuff about how gays recruit boys to become gay and—once they put on make-up—they can't go back. I was shrinking in my seat, not wanting to deal with it. But then during the course of the five or eight days that we were there, we interviewed a couple of visible gay activists, notably one guy named 'Longjones' [John Abdallah Wambere], an extremely obvious queen who made a point of being clear about his orientation. I realized, 'Shit, if he can be out facing death threats, then I have no excuse not to be.' " Wambere's courage put a lot of pressure on Birchlbaum to come out to his Ugandan activist collaborators.

"On the way back to the airport, we had the same taxi driver. At a certain point—we were already at the airport—I told him, 'Y'know, that stuff you said is not true. I know, because I'm gay. That's nonsense. We don't recruit.' He completely melted. In an instant he realized that he had no basis for thinking such things. 'These are the things we hear all the time,' he admitted, 'but I've never actually met a gay.' "

Admitting that he didn't know what American citizens can do about Uganda "besides trying to stop these crazy American preachers from going over there", I'm surprised Bichlbaum didn't detail the ongoing litigation against Scott Lively, which built momentum in December 2014 when it was announced that Lively will have to stand trial in federal court for crimes against humanity, having failed to get the case dismissed on First Amendment grounds. Sarah S. Kilborne breaks it down at Slate. 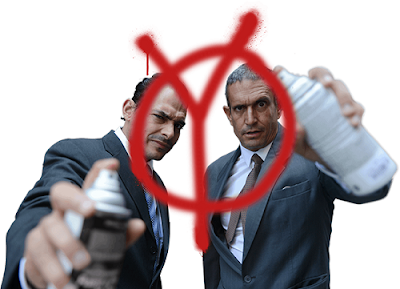 Queried about the fluctuation between initial optimism at the onset of a staged protest and the deflation experienced afterwards, Bichlbaum was asked if he really believed change was going to happen as a result of his participation in protests?

"I know I'm fooling myself too," he admitted, "It's a con I do on myself to have the proper enthusiasm for it. But I'm not actually deflated afterwards. I am, in the way anybody is after having done a big thing, but it's not like I'm actually disappointed that we haven't changed everything. It's a common feeling. There are these giant protests that sometimes don't accomplish anything by themselves. Almost every action, every protest, fails. It's hard to find an action or a protest that actually changes things by itself. Yet, the movements that actions and protests are a part of always achieve what they set out to achieve. We no longer have child labor, or slavery, we have gay marriage, and none of the actions associated with those things actually achieved that. They all failed. But the movements succeed."

The film's closing protest is perhaps its most comic and successful as The Yes Men infiltrate a Homeland Security conference and succeed in convincing participants to join in a feel-good Native American circle dance celebrating the downsizing of fossil-fuel dependence to shift to renewable energies, whose profits will be handed over to indigenous tribes.  One audience member wondered about the fall-out of such prank activism? Do the participants become angry once they find out they've been punked? 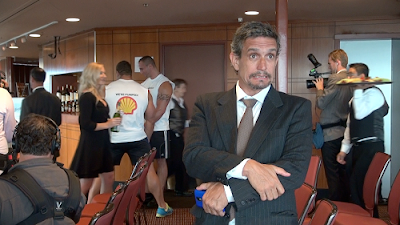 Bichlbaum responded: "It's great that they have this excitement around this possibility but then after we leave and they realize it was a hoax—which actually took them five hours—do they feel disappointed and maybe angry? Does it have a negative effect? The short answer is: we don't care. They're not really our audience at all. The point of that scene is to show film audiences or anybody who hears about it that our conceptions of what's stopping us are wrong. By and large, it's not them but a few people and the system itself, the rules that run the world, that are the problem. It's not the human beings at these corporations. They're going to be happy if things are done that fix the world. It's the system and the fact that we allow money to do whatever it wants. We need to take action and make it happen and there won't be that many people standing against us. The people themselves, I don't think it matters that much. They can't do anything anyways. I don't think that within companies there's much change to be made. The bottom line is they have to make a profit. They're not going to advocate for a renewable energy revolution in reality because that wouldn't be profitable. Unless we, the government, decide it's a good idea, they're not ever going to do it and it doesn't even matter how much they want it. They're never going to be able to do that unless everybody gets together and says, 'This is the correct thing to do.' Then they're going to be really happy to do it. We don't put any hope in them."