If memory serves me, the "hold review" capsule was a negotiated compromise struck at one of the early editions of the New York Film Festival to mollify theater owners who felt that festival reviews were robbing them of press coverage necessary for commercially successful theatrical runs. A balance was demanded between movies as art and movies as commerce and the hold review became the concise means to contain that tension. It's now de rigeur for a good percentage of films shown at film festivals to be embargoed on hold review, which range—contingent on who's counting—between 50 to 100 words, plus or minus a sentence or two.

I chafed against the policy early on, primarily because San Francisco's theatrical openings were (and often still are) way behind New York and Los Angeles, meaning I was being cut off at the knees in joining the larger conversation in a timely manner. The publicists never really cared about that (why should they?) and, admittedly, I never felt responsible for getting bums in seats (why should I?). In 2008, at the 51st edition of the San Francisco International Film Festival, I reached a pitch of itchy bitchiness when advised that Jia Zheng-ke's Still Life (2006)—which had already been on festival circuit for two years—was tethered to a 75-word hold review. I responded with 75 online links to critical reviews. That earned a few stifled chuckles and a bit of leeway. Not only did I consider it stupid to tether local writers to San Francisco's theatrical openings, but insulting to moviegoers to assume they couldn't do a selfsame Google search to find out about a film.

Nowadays, I've let bygones be bygones and have learned to enjoy hold reviews, like program capsules, as practices in short form criticism. A little more elbow room than a tweet, acceptable as a Facebook entry, and clearly just the right size for social media consumption. A swallow or two of opinion and perspective, no less, no more, maybe an image to cap it off. Here you go. 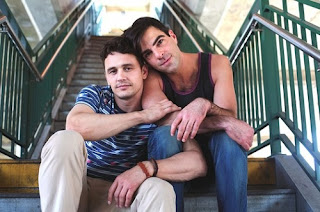 Justin Kelly's I Am Michael (2015) is the most downbeat opening night feature in recent Frameline memory and my reactions are predictably mixed. From gay rights advocate to Christian pastor, Michael Glatze's controversial "turn or burn" feature narrative comes across as a sardonic send-up of self-lacerating rationalizations (i.e., religious conversion). If I'm supposed to feel compassion, it's only for James Franco's unbridled hunger to play every gay role in existence. I'll accept I Am Michael as an eccentric genre mash-up simulating identity confusion. The horror-comedy hybrid as a cautionary template actually works here, whether intended to or not. "There's No Place Like Here," Frameline's motto attests: even if "here" in this instance is both horrific in its self-loathing and ridiculous in its Christian overreach. Besides, no one's ever done it as good as Saint Augustine. 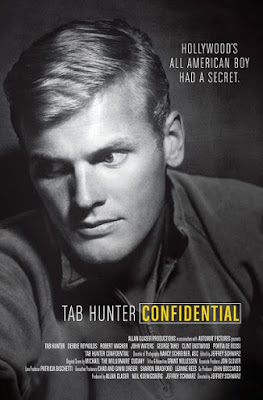 Tab Hunter Confidential (2015), Jeffrey Schwarz's companion documentary to Hunter's autobiography (co-authored by Eddie Muller) is, in effect, an intimate conversation with one of Hollywood's most famous sex symbols. The "X" factor that made him an icon is articulated as a groundedness that reveals a solid and sincere human being. Schwartz's documentary is eye candy not only for Hunter's publicized youth, but for the glamorous era of Hollywood's star-making machinery. Smartly edited with '50s pop cultural flourishes, creative animations and titles by Grant Nellessen and Taryn Teigue, Hunter's recount of his own career is sure to be a favorite Bay Area premiere at the upcoming 39th edition of Frameline, where Schwartz will receive the Frameline Award given every year to a person or entity that has made a major contribution to LGBTQ representation in film, television, or the media arts. 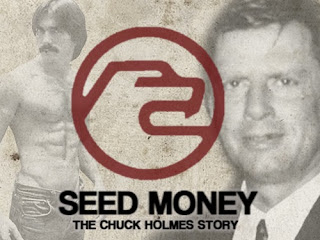 Chuck Holmes, founder of Falcon Studios, is aptly characterized as the gay equivalent of Hugh Hefner in Michael Stabile's documentary portrait Seed Money: The Chuck Holmes Story (2015), which honors the entrepreneur for his porn films of the '70s-'80s. His manufactured fantasies of virilified masculinity familiar to men of my generation legitimized gay male sexuality as a political identity when San Francisco was party central, before the onset of AIDS doomed the revelry. Whether these lockstep fantasies were a form of subcultural fascism remains as controversial as Holmes' later legacy as a major donor to activist causes. It's strange to frame pornography within nostalgic terms, but Stabile's doc conjures memories galore. 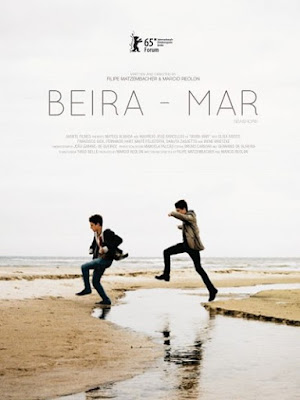 Certain Jungian analysts will confirm that the seaside is often—in the dreams of men—an anima terrain where men can get in touch with their feminine side. Brazilian directors Felipe Matzembacher and Marcio Reolon explore that gender fluidity in their debut feature Seashore (Beira-Mar, 2015), whose attractive young cast inflects a familiar narrative with compelling, sensuous performances. Childhood friends, Martin (Mateus Almada) confides to Tomaz (Mauricio Barcellos) that his father once whipped him for taking a solitary walk on the beach and getting lost. Seashore tenderly teases that metaphor to suggest that getting lost is the only way to live life and—as bracing as the first wave might be—to dive into love. 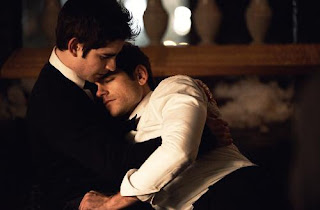 In Those People (2015), Joey Kuhn's directorial debut, we get to see suffering albatrosses hanging around the necks of an attractive crew of upper crust Manhattan queers. Well-produced, with a literate sense of its melodramatic romance, Those People explores the captivity of early friendships, mentors and their eventual torments, the failures of first love, and the ever-popular erotics embedded in cross-class and cross-race attractions: Laurentian and Shakespearean flourishes move this narrative right along, as do the Gilbert and Sullivan sing-a-longs. Its central erotic triangulation—Jonathan Gordon (Charlie), Jason Ralph (Sebastian), Haaz Sleiman (Tim)—provide a strong engine to keep up the momentum of repeated off-and-on, give-and-take histrionics.
Posted by Michael Guillen at 6/19/2015 12:38:00 PM