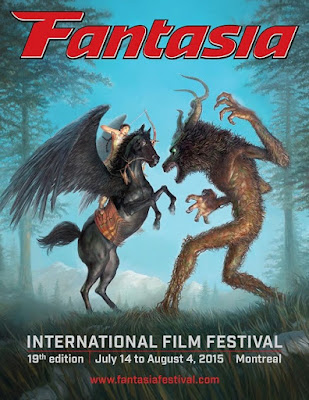 The administrative minutiae following the death last April of my beloved sister Barbara Guillén made it impossible for me to attend the 2014 edition of the Fantasia International Film Festival (Fantasia), which makes my being able to attend this Summer's 19th edition that much more of a recovery and a rebound. I dedicate my coverage of Fantasia 2015 to Barbara.

Montreal's Fantasia runs for three weeks (July 14-August 4, 2015) and returns to the Concordia Hall Cinema as its main venue. What follows is the first wave of announcements released May 6, 2015 to whet appetites for what promises to be another exciting line-up. A second wave announcement of titles will be released in June with the festival's full lineup of screenings and events to be announced on July 7th. 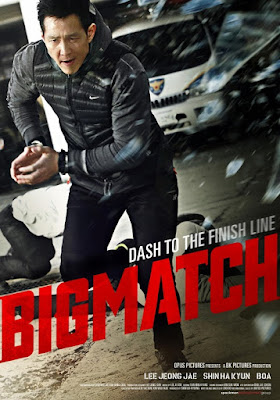 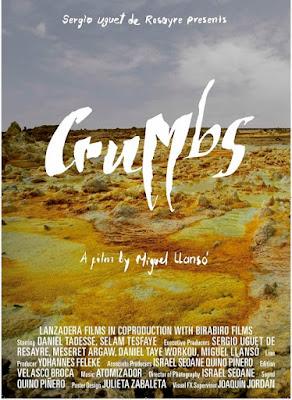 At The Hollywood Reporter, Neil Young characterizes Crumbs as an "unpredictable filmic oddity" that "takes an exotic and sometimes surreal approach to what's essentially a simple, touching love story." At Indiewire, Tambay A. Obenson bills it as "the first ever Ethiopian post-apocalyptic, surreal, sci-fi feature length film." At Eye For Film, Rebecca Naughten writes that Llansó "manages to combine the poetic sci-fi of Andrei Tarkovsky with the surrealism and dark humor of his fellow countrymen such as Luis Buñuel, Luis García Berlanga, or more recently Sergio Caballero." 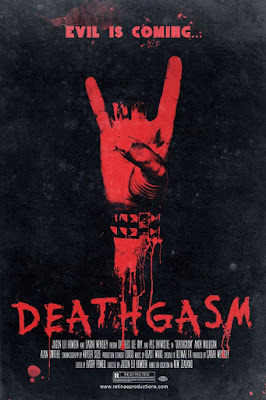 At Variety, Dennis Harvey claims that the script for this "rude, bloody mess" does not live up the vivid splatter effects, but the film's "consistent if undiscriminating high energy engenders a certain persuasive goodwill." At Twitch, Zach Gayne qualifies that the "voice that shines through the hysterical dialogue and playfully comic editing, is so teenage, so punk, it makes a beat-to-death genre feel refreshing." At Bloody Disgusting, Brad Miska praises it as "the most metal horror film ever", and Drew Tinnin of Dread Central adds: "Deathgasm knows exactly what it is and where its heart is, giving genre fans a welcome return to heavy metal in horror without cutting back on any of the splatstick that New Zealand has become known for, for better or worse." 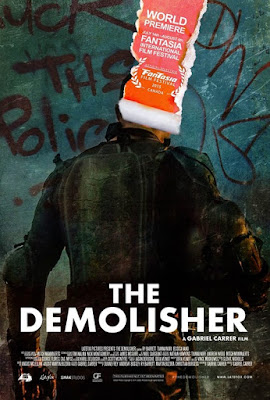 The Demolisher (Canada, dir. Gabriel Carrer)—An unstable repairman tending to his crippled wife—an ex-cop brutalized by gang violence—sneaks out at night to unleash his rage on any criminals he can find. An atmospheric and poetic reinterpretation of the urban Vigilante Film as a psychological examination of trauma. World Premiere. Official site. IMDb. Facebook. 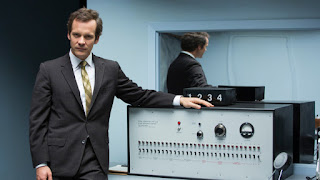 At Variety, Scott Foundas calls Experimenter "a highly formal, always fascinating movie" and notes: "Almereyda conceives of Milgram's life and work as a kind of constantly evolving theater piece and runs with the idea, resulting in a decidedly Brechtian bit of filmmaking that routinely breaks the fourth wall and employs other bits of theatrical artifice to tell its tale." Countering at Indiewire, Katie Walsh states that—whereas Dr. Stanley Milgram's Obedience to Authority experiment itself is fascinating—"the approach taken by Almereyda in using distractingly peculiar storytelling techniques only succeed in distancing the audience from the film's inspiration." At Ioncinema, Nicholas Bell writes: "Filmed with a desaturated palette and utilizing props and set backdrops to inflect rather than convey period, Almereyda's created a cold, clinical portrait of a man whose own familial background informed his timely social experiment, one that's been referenced and recreated as a tenet of understanding unnerving truths as concerns human behavior." Bell asserts Sarsgaard "is convincing as an overly composed man secretly irritated by the nearsighted colleagues and culture that reigned in the greatness he could have received during his lifetime." 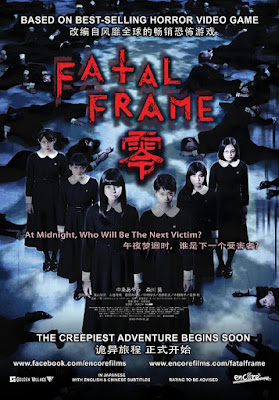 At The Japan Times, Mark Schilling writes that, thankfully, there is "not a single jack-in-the-box scare in Fatal Frame and that, instead, "Working from a novel by Eiji Otsuka, which is in turn based on a popular series of video games, Asato builds her fright effects more from whispered rumors, girlish crushes and the nebulous border between dreams and reality, the living and the dead. ... Even so, Fatal Frame gets a lot right, beginning with its casting of real, if unknown teens, instead of the usual name actors a decade or so older than their characters." Schilling concludes, "Not quite down to zero degrees, but close enough." 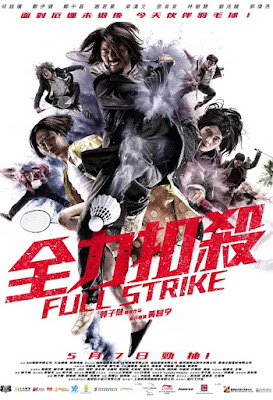 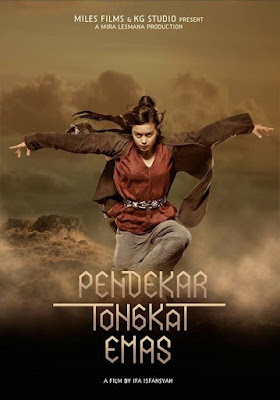 The Golden Cane Warrior / Pendekar Tongkat Emas (Indonesia, dir. Ifa Isfansyah)—Aging female warrior Cempaka is the most respected fighter in the Golden Cane clan, but she must now find a successor among her disciples. Coming on the heels of the wildly popular The Raid series, this flawlessly executed epic actioner by Ifa Isfansyah is here to confirm Indonesia's place in the leading nations of martial arts cinema. Canadian Premiere. IMDb. Wikipedia. Facebook. 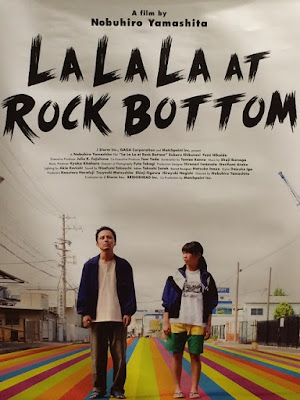 At The Japan Times, Mark Schilling claims that "instead of the expected pop confection, the film is a sharp-edged character study set on society’s margins, with a comic undertone that at times bubbles into slapstick farce and at other times disappears entirely. It's not hard to see where the film is going, but the emotional payoffs are genuinely earned rather than formulaically calculated." At Twitch, Ard Vijn writes that Yamashita "delivers a pleasant film where all the actors shine" and that, all in all, La La La at Rock Bottom "is good, pleasant fun. Not laugh-out-loud funny, not soul-rendingly devastating, but very well made, and treating its audience as a bit more intelligent than usual. Definitely recommended!" 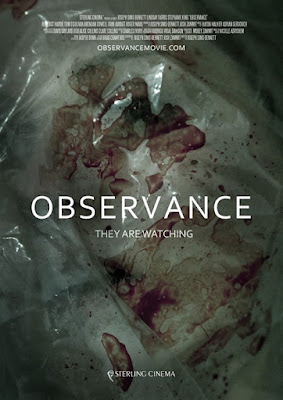 Observance (Australia, dir. Joseph Sims-Dennett)—His job is to observe, observe a beautiful woman. Soon enough, he discovers his gig implies more than he ever asked for. A poignant and terrifying thriller in the vein of Polanski's Repulsion, and among the first 2015 Camera Lucida selections to be announced, Observance promises to haunt your nightmares. World premiere. Official site. IMDb. Facebook. 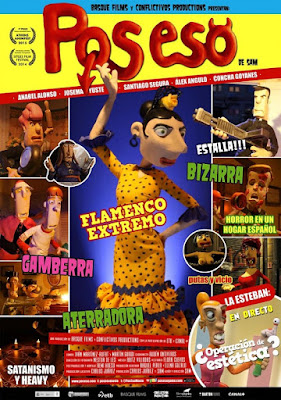 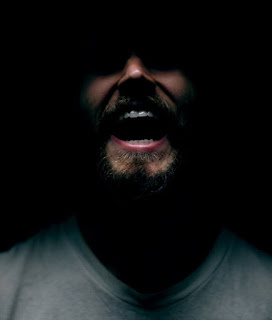 They Look Like People (USA, dir. Perry Blackshear)—A smart, haunting psychological horror masterpiece that Verite Film hailed as "unbearably tense and profoundly moving." Despite having only been playing on the fest circuit for five months, They Look Like People has already won awards at Slamdance, SF Indiefest, IFF Boston and the Nashville Film Festival. International Premiere. Official site. IMDb. Facebook.

At Killer Movie Reviews, Andrea Chase praised They Look Like People as "a first-rate existential horror film, as well as a psychological thriller" that's "as emotionally engrossing as it is suspenseful" and "wildly entertaining." She concludes: "Questions of alienation, trust, and the societal presumptions and demands about masculinity combine in a provocative tale of the more subtle definitions of reality, as well as what to do with a friend in need who may end up killing you." At Hammer to Nail, Paul Sbrizzi proclaims: "Director Perry Blackshear takes a premise that could easily have come across sensationalistic and roots it in fully developed characters; he creates what feels like a big movie with a beautifully simple production." At Twitch, Ben Umstead says Blackshear's feature debut "crackles with technical and narrative ingenuity, exploring the fragile state of the schizophrenic mind with micro-budget genre trappings." 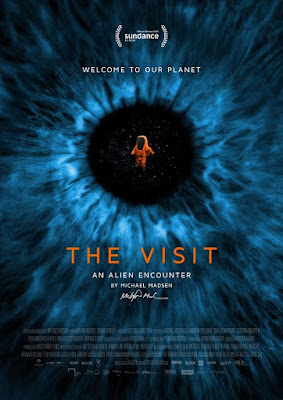 The Visit (Denmark, dir: Michael Madsen)—Is Earth ready for an alien visitation? Michael Madsen's fascinating follow-up to Into Eternity reflects on this interrogation through a simulation with scientists and philosophers. A powerful and groundbreaking documentary. Official Selection: Sundance, Hot Docs. Quebec Premiere. IMDb.

Reviews for Madsen's "simulated" documentary have been fair to mixed. At Variety, Ben Kenigsberg writes: "Filled with sleek and often surreal imagery, The Visit is served at a cool temperature; it fluctuates from fascinating to banal depending on the logistics under discussion. A feat of speculation that amounts more to a curiosity than a major sci-fi movie...." At The Hollywood Reporter, Justin Lowe characterizes Madsen's examination of humankind's potential response to extraterrestrial contact as (at turns) "realistic", "contemplative", "surprisingly credulous", "insistently experimental" and definitely "individualistic". His bottom line is that The Visit is "thinking the unknowable." At Smells Like Screen Spirit, Don Simpson adds: "The Visit is a full immersive experience that allows the audience to play the role of the alien." At The House Next Door, Clayton Dillard counters: "Were Madsen inclined to critique Hollywood fantasies of destruction rather than ape them, The Visit would be a notable rebuttal rather than disposable speculative fiction." Bears Fonte—who considered The Visit "the most fascinating film" he saw at Sundance—interviews Madsen for AMFM Magazine.
Posted by Michael Guillen at 6/03/2015 03:22:00 PM