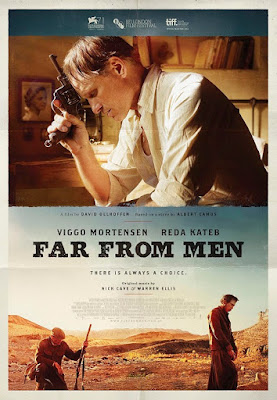 Far From Men / Loin Des Hommes (dir. David Oelhoffen, 2014)—Choice under pressure is the gist of this genre hybrid that borrows tropes from war films as well as westerns. Shot on the Algerian / Moroccan border, John Ford would have had a heyday with these vast and bleak vistas. Based on Albert Camus's short story "The Guest", David Oelhoffen's film expands past that story to incorporate the struggle for Algerian independence and how it impacts individuals caught in the crossfire. Viggo Mortensen's eyes carry existential weight as he guides Reda Kateb away from cultural duty to personal survival, and then—in turn—must make the same decision for himself. Original music by Nick Cave and Warren Ellis. Critics Roundup has done exactly that. 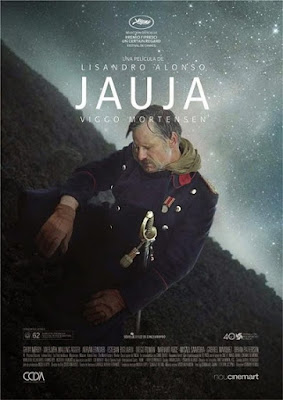 Jauja (dir. Lisandro Alonso, 2014)—There's something about Lisandro Alonso's introductory shot framed in Academy aspect ratio that instantly propels you into his oneiric universe where a bleak desert of rock and pampas grass can—as his daughter in the film puts it—"literally fill you up." Jauja is rich with landscape poetry and the sonambulist circumambulations of nested narratives. The last time I spoke with Lisandro, he told me he was going to take a break from filmmaking to go work on his father's ranch with his brothers. Clearly that time back on the land shifted him away from his urban discontents to dream big with the stars. Along with Far From Men, Viggo Mortensen has become the go-to actor for neo-westerns. He embodies the solitary anti-hero plagued by existential doubts.

Despite Jauja being on "hold review" during SFIFF (in anticipation of its Bay Area theatrical release), reams of critical praise have been written about Alonso's film since it first premiered at the 2014 Cannes Film Festival. Reliably, Dave Hudson at Fandor's Keyframe Daily aggregated the reviews from Cannes, and its subsequent screenings at last Fall's New York Film Festival.

Bayside, Brian Darr's capsule at Hell on Frisco Bay noted: "Viggo Mortensen's a Danish cavalryman seeking his teenaged daughter in remote Patagonia. He simultaneously exudes power and frailty, dwarfed as he often is by expanses separating him from the square frame, rounded at the corners as if to suggest Carleton Watkins' mammoth plates. When these curves disappear into blackness, it's one of the film's sublime moments, at least as many as there were co-producing nations (according to IMDb, eight!)" I might argue that Alonso has put the nail in the coffin of the festival concept of national cinemas once and for all, so why bother to even look at films through that lens any longer? Consider them emancipated from catalog indices.

At the San Francisco Chronicle, San Francisco Film Critics Circle (SFFCC) colleague Pam Grady conducted a brief but insightful email interview with lead actor Mortensen (who was unable to attend the festival), articulating the tension between his rational character ("a sort of Danish Don Quixote") and the irrational, nearly surreal, events transpiring around him in his search for his missing daughter. For Playboy, yet another SFFCC colleague Sam Fragoso culled from Mortensen his thoughts on Albert Camus, on whose short story Far From Men was based, comparing Camus to Mortensen: "With the passage of time, both artists are tangentially unified both by their inability to mince words, and an uncompromising commitment to seeking out the truth, no matter where it may take them."

There's no dearth of interviews with Mortensen regarding these two films as well as future projects, including Martin Dale's for Variety, Alice Fischer for The Guardian, Eric Benson for Hollywood Prospectus, Nicolas Rapold's for Film Comment, and Calum Marsh's joint interview with Mortensen and Alonso for Hazlitt. At Reverse Shot, Adam Nayman queries Alonso, whereas Dustin Chang does those honors for Twitch.
Posted by Michael Guillen at 6/01/2015 06:04:00 PM