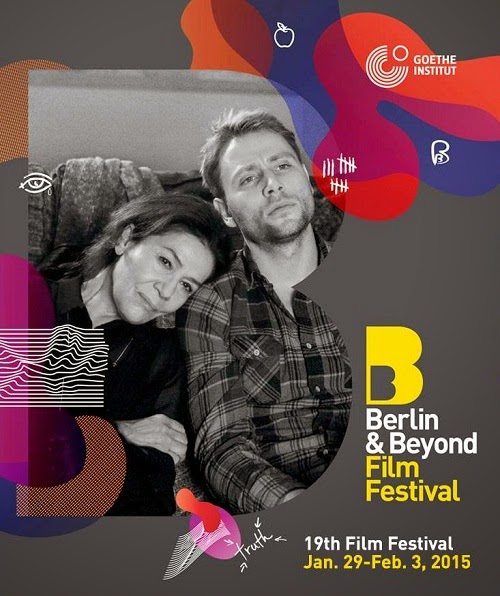 In its 19th edition, Berlin & Beyond (B&B) returns to the Castro Theatre, San Francisco's historic movie palace, from Thursday, January 29, 2015 through Sunday, February 1, 2015, before shifting to its alternate venues the Goethe-Institut Auditorium, Palo Alto's Aquarius Theatre, and Berkeley's California Theatre. On display across its four venues are new films from Germany, Austria and Switzerland, including 16 features, 5 documentaries, and a program of shorts. 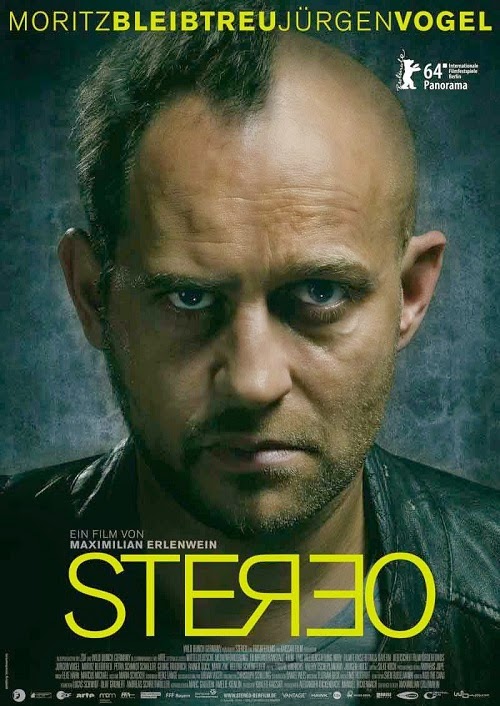 Stereo had its North American premiere at Fantasia and was the opening night entry at the 18th Puchon International Fantastic Film Festival (PiFan). Twitch editor Todd Brown posed: "Is director Maximilian Erlenwein aiming for a career as the German David Fincher? Dark moody visuals, a throbbing soundtrack, cold and clinical violence ... has more than a few points of contact with Fincher's signature style." At The Hollywood Reporter, Boyd van Hoeij likewise lauded the film's "eye-catching, roving camerawork and electro-infused soundtrack", even as he had some issues with the film's complicated narrative reach.

This muscular thriller adds psycho-supernatural elements to rev up an already testosterone-charged narrative about an unassuming garage mechanic Erik (Vogel) who begins receiving unsolicited cautionary advice from a hallucinated hooded figure named Henry (Bleibtreu). Who is Henry? Why is he trying to warn Erik? What is being revealed as Erik's psyche begins to crack open? How will it affect Erik's life when Henry tells him point blank, "You are the bad guy." Toss in a psychic acupuncturist and a whore house called Heaven and Stereo delivers its genre chops with considerable action and style. Erik is one acupuncture needle away from violent mayhem. 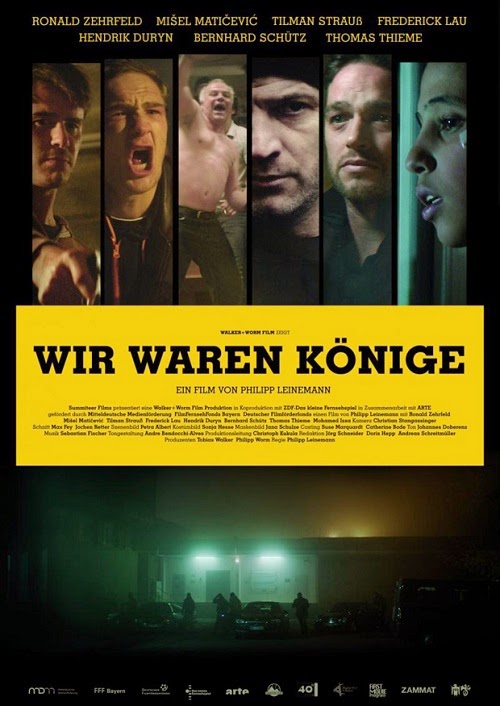 The King's Surrender / Wir Waren Könige (Dir. Philipp Leinemann, 2014)—Ronald Zehrfeld is being fêted with B&B's first-ever Spotlight Award in Acting, and the festival is screening three of his films: Inbetween Worlds, The King's Surrender, and Phoenix. I first noticed him as the handsome male lead across Nina Hoss in Christian Petzold's Barbara (2012) and recently saw his performance in Germany's Oscar® submission Beloved Sisters (2014), directed by Dominik Graf. Both Zehrfeld and director Leinemann will be in attendance for the West Coast premiere of The King's Surrender, which won the Jury Award for Best Narrative Feature at the 2014 Austin Film Festival, and in which Zehrfeld embodies the conscience of a special forces police officer caught between corrupt colleagues and volatile street gangs. What kicks off as macho camaraderie transforms into a study of compromised loyalties to longstanding friendships. The film also feels keenly relevant with recent concerns over police militarization at odds with a criminalized citizenry, where unrestrained force is the default means to an end. Consequential poignance is added by the desperate needs of a young immigrant boy to find his place in a new country. Boyd van Hoeij's bottom line at The Hollywood Reporter: "A superior, sprawling cops-and-crooks saga." The film's final photographic still is chilling. 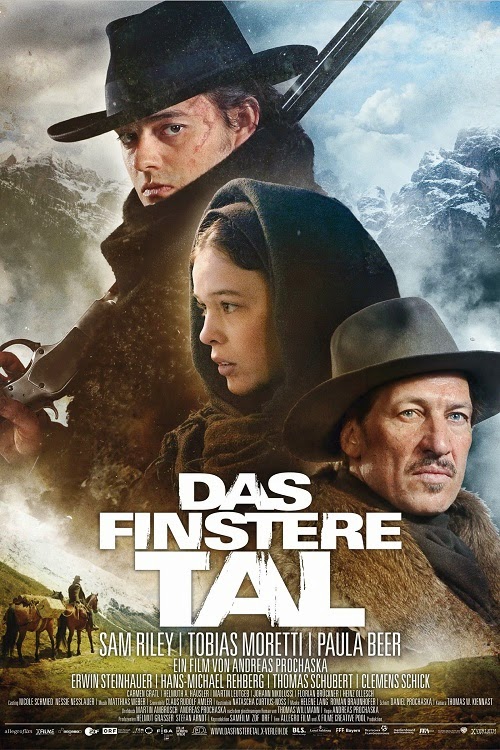 The Dark Valley / Das Finstere Tal (Dir. Andreas Prochaska, 2014)—By now it should be clear that I love my genre, and thus I was quite pleased with this late show western added to B&B's line-up. Austria's entry to the 2015 Academy Awards® for Best Foreign Language Film and seven-time winner at the 2014 German Film Awards, The Dark Valley stages an intense stand-off between a lone rider and a corrupt patriarch and his sons who have a high mountain village under siege. Perversity darkens the valley and revenge proves to be remedy. Excellently paced with stunning alpine photography by Thomas W. Kiennast and a commanding central performance by British actor Sam Reily as the Pale Rider Greider. 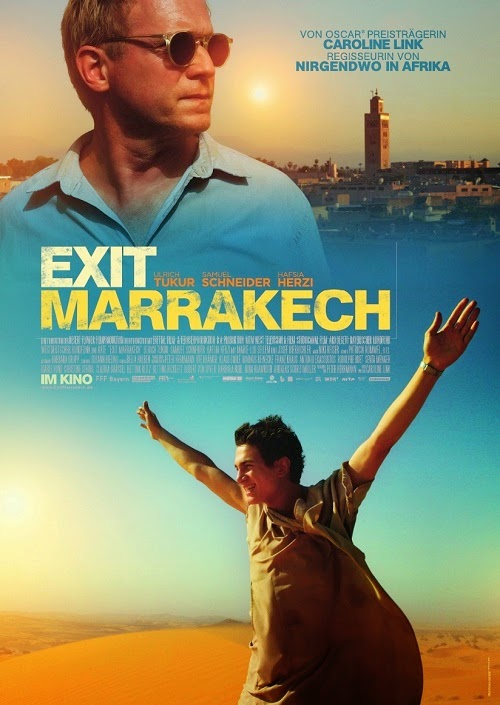 Exit Marrakech (Dir. Caroline Link, 2013)—As its Centerpiece presentation, B&B offers the charming and thoughtful coming-of-age / road trip film Exit Marrakech, with lead actor Samuel Schneider in a charismatic breakout performance. When 17-year-old Ben (Schneider) discovers he will be joining his estranged father (Ulrich Tukur, The Lives of Others) in Marrakech during his Summer vacation, he chafes at the bit and acts out, refusing to participate in what he perceives to be his father's neocolonialist theatrical tour and opting instead to pursue authentic picaresque adventures in the deserts of Morocco. Among the friends he meets on the street, including a lovely young prostitute Karima (Hafsia Herzi, The Secret of the Grain) with whom he becomes infatuated, Ben will discover a friendship long belated that he never anticipated. Cinematographer Bella Halben captures the spare beauty of the Moroccan countryside and its archaic architecture, providing a vast backdrop to an intimate tale of reconciliation. Schneider will be in attendance to add value to the festival screening. 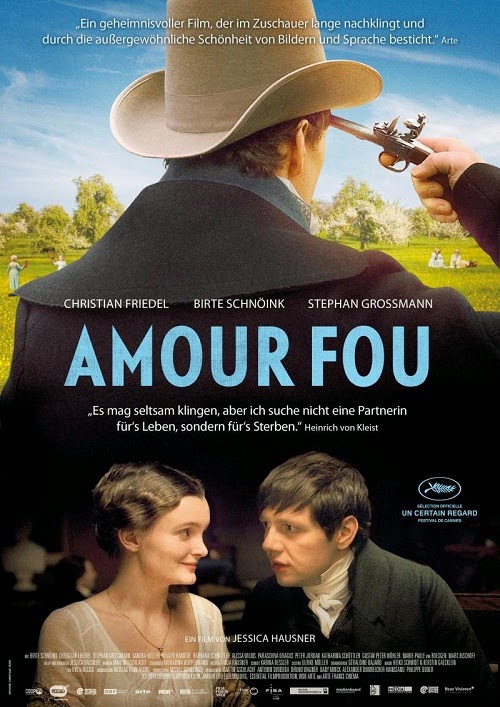 Amour Fou (Dir. Jessica Hausner, 2014)—The true stars in this formal and stately period piece based on the 1811 suicide pact between Heinrich von Kleist and Henrietta Vogel is cinematographer Martin Gschlacht's studied and painterly compositions, Katharina Wöppermann's production design, Boris Bartholomäus' art direction, and Tanja Hausner's costume design. An official selection in Un Certain Regard at Cannes, Amour Fou's West Coast premiere moves slowly and surely towards its fated end and keeps the eye distracted the whole time with a color palette that contrasts a governing green with magenta, pink and red accents. Amour Fou reveals romanticism as a peculiar and deadly neurosis. 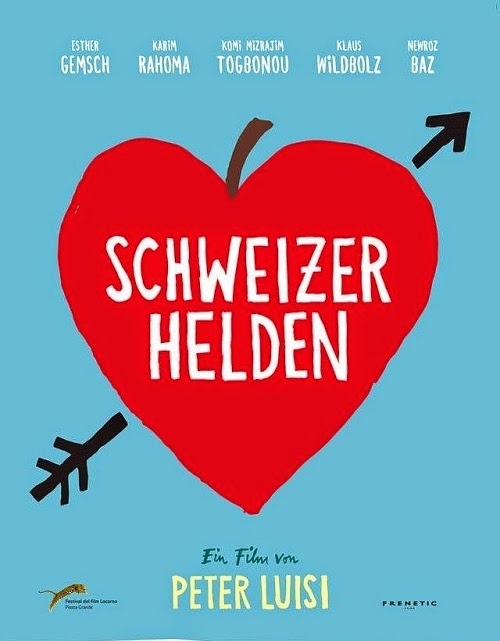 Unlikely Heroes / Schweizer Helden (Dir. Peter Luisi, 2014)—I can recommend the Northern California premiere of Peter Luisi's Unlikely Heroes, even as I remain a bit conflicted at how narrowly it skirts the edges of both poignance and cliché. Perhaps it's safe to call it a poignant cliché that will, undoubtedly, please audiences with its good intentions (it won the Audience Award at Locarno) even though it problematically presents a white protagonist as the savior of a group of infantile-like asylum-seeking refugees. It redeems itself by naming the elephant in the room, such that its denouement achieves effect as Switzerland's national and cultural legend of William Tell is given an ethnicized reenactment. I have to respect what it achieved even though I felt a bit uncomfortable getting there.
Posted by Michael Guillen at 1/29/2015 10:55:00 AM