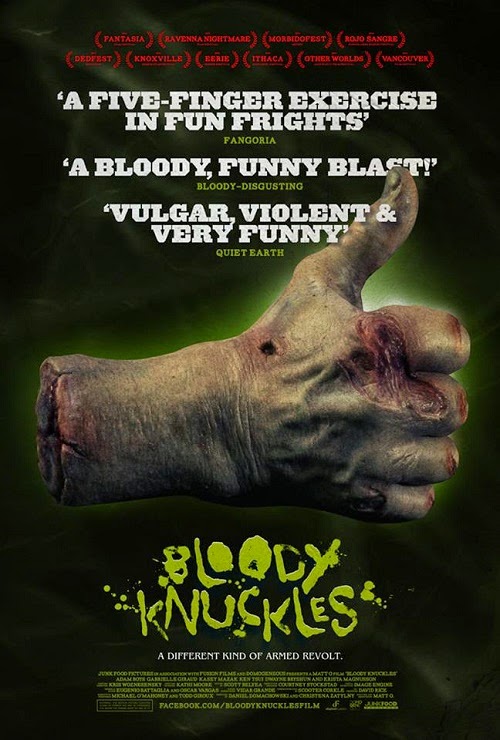 It's difficult not to get heavy-handed with the puns when writing about Matt O'Mahoney's debut feature Bloody Knuckles (2014) [IMDb / Facebook], which boasted its world premiere at Fantasia in their newly-launched Underground sidebar. Bloody Knuckles has since gained fans at a handful of genre festivals on both sides of the Atlantic. Did I mention it was shot digitally?

Bloody Knuckles arrives to San Francisco as the first of three opening night entries for the 11th edition of IndieFest's Another Hole in the Head Film Festival (Holehead). With an indirect tip of the hat to San Francisco's Chinatown, Bloody Knuckles reveals an '80s VHS horror aesthetic with low-budget production, a clever use of practical gore effects, and politically incorrect comedy ameliorated by foxy, sympathetic lead actor Adam Boys (who plays Travis, the creator of Vulgarian Invasions, an underground comic that gleefully wallows in the obscene) and his winsome love interest Amy (Gabrielle Giraud).

Angered by the Canadian debates about self-censorship in the wake of the 2005 Jyllands-Posten Muhammad cartoons controversy, O'Mahoney vented his frustration by reminding folks that people fought really hard for their right to freedom of speech and that buckling to threats sets a terrible precedent. In Bloody Knuckles he aims offense at Asians, Blacks, and Gays in equal measure. Contingent upon your perspectives on subcultural stereotypes, you'll either wink, wince, or walk out; but, you'll have to give a hand to O'Mahoney's deft balancing act that softens equal opportunity offense with the effective distraction of mayhem, carnage and humor. A special shout-out to the use of Loretta Lynn's "Fist City" over the closing credits as an especially wry (and classy) touch.

As synopsized by Holehead: "Casually dismissing his detractors as pious censors, Travis finds himself in dangerous territory after his comic targets a shady Chinatown businessman named Leonard Fong. Mr. Fong does not take kindly to the offensive caricature of him and orders his goons to punish Travis by severing his drawing hand. Rattled to his core, Travis abandons his comic and retreats into a miserable, alcoholic existence. That is, until his hand returns from the grave. The hand urges Travis to resume Vulgarian Invasions but Travis refuses, fearing a deadly reprisal. The hand, however, will not relent and embarks on a perverse, by-any-means-necessary mission to rejuvenate Travis' once bold spirit."

Marina Antunes interviewed O'Mahoney for Quiet Earth, after stating in her review for the film: "Ever wonder what would happen if Thing dragged one of the Addams kids through a seedy underworld of dirty comics, contraband pesticides and underground sex clubs? That's kind of what Bloody Knuckles is about." O'Mahoney offers further commentary in his Fantasia video interview. At least one thumb up for an offensive but fun entry at this year's Holehead.