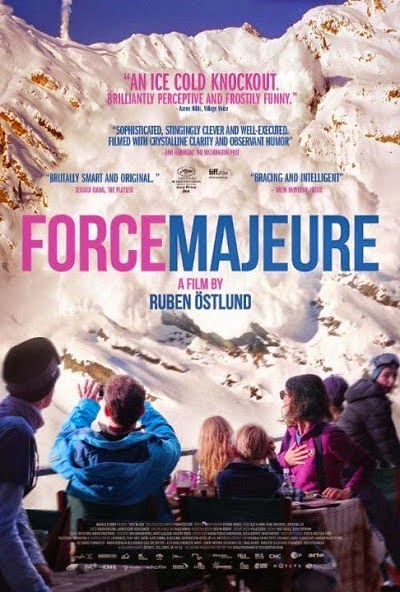 As Michael Hawley synopsized in his Evening Class preview for the recent 37th edition of the Mill Valley Film Festival, a prize-winner from Cannes' Un Certain Regard sidebar, "Sweden's satiric Force Majeure lampoons contemporary notions of masculinity and took home the sidebar's jury prize. It traces the repercussions faced by a husband and father after he initially abandons his family during a ski resort avalanche. Director Ruben Öslund's previous film was the excruciating (in a good way) bullying treatise Play." Force Majeure has since screened in the Special Presentations sidebar at the Toronto International Film Festival, has been nominated for the 2014 Nordic Council Film Prize, and has been chosen as Sweden's official Foreign Language submission to next Spring's Oscars®. At Keyframe's Daily, David Hudson has captured a wealth of robust reviews from Cannes. The film opens in the Bay Area on Friday, November 7, at Landmark Opera Plaza in San Francisco, Albany Twin in Albany, and the Christopher B. Smith Rafael Film Center in San Rafael.  It opens at The Flicks in Boise, Idaho on December 12.

As the website synopsizes: "Wickedly funny and precisely observed, Force Majeure tells the story of a model Swedish family—handsome businessman Tomas, his willowy wife Ebba and their two blond children—on a skiing holiday in the French Alps. The sun is shining and the slopes are spectacular but during a lunch at a mountainside restaurant an avalanche suddenly bears down on the happy diners. With people fleeing in all directions and his wife and children in a state of panic, Tomas makes a decision that will shake his marriage to its core and leave him struggling to reclaim his role as family patriarch." 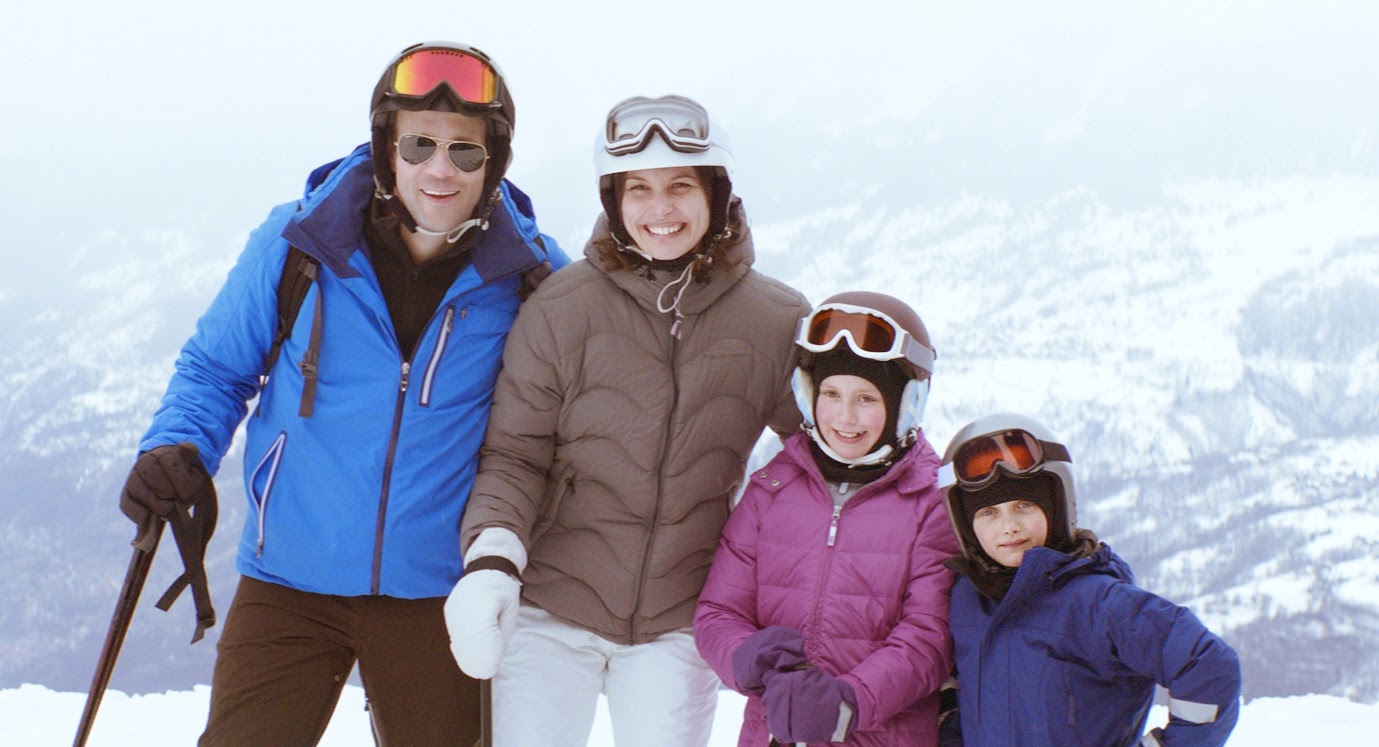 From its introductory staged family photographs that belie glossed-over internal familial tensions, through the avalanche and its aftermath in question, to its admirably non-judgmental final trek down the mountain, Force Majeure is predominantly a tour de force for its cinematographer Fredrik Wenzel whose innovative camera work frames the subject family against the majestic scenery of the French Alps, while simulating a false sense of safety through the meticulously abstracted observation of everyday operations that make a ski lodge run. Precise horizontal compositions provide a real sense of place and environment, not only in landscape, but within the lodge itself, particularly the hallway outside their residence where the parents can argue and attack each other out of earshot of the kids. Wenzel even interrupts the static beauty of his shots with a little Go-Pro action. The two main tools in his box, however, are a consistent use of distance to both minimize and aggravate the subject family's narrative dilemma, and intimate close-ups that allow the actors to color their performances with subtle nuances. Here, Force Majeure tips its hat to Ingmar Bergman. Scenes from a Marriage comes specifically to mind, and in some ways Force Majeure could as easily be called Scenes From a Ski Holiday.

The avalanche itself, immersively filmed, is not only an evident visual for nature's indifference and uncontrollable power, but then becomes a consistent metaphor of how tensions and misunderstandings build and cascade. Just as avalanche smoke and snow blindness stand in for how clarity of perception fails when pit against forces beyond personal control, within the interactional sphere the cascading avalanche resembles a form of spreading contagion as Ebba's judgment of Tomas influences Fanny to judge her partner (Kristofer Hivju) for imagined failings of character. Though not really funny, it comes off funny as gendered perceptions square off, such that—after having his balls busted for failing his family—Tomas achieves a momentary but short-lived reprieve when drinking beers with his buddy. First an attractive stranger interrupts their conversation to tell Tomas that her friend thinks he is the most handsome man at the bar, only to have her return a minute or so later to admit she made a mistake and approached the wrong man. The sting is both unerring and uncomfortable and suggests that the best a man can do is usually in his youth when he's drunk and screaming with friends in a sauna.

That interjected party scene, incidentally, emphasized the expert work of the film's sound design and score by Ola Fløttum who ingeniously melds classic music lietmotifs with pop rock to devise a lingering sense of unease and impending disaster. In this sauna scene, each time the classic music is played to signal civilization (perhaps), the drunk rowdy boys scream, crawl and pour beer all over each other, as if the very notion of civilized behavior is enraging to the instinctual male.

I'm not sure if one is supposed to take sides in this contractual moment of force majeure. In the face of an oncoming avalanche, the mother is unable to move and can only think of protecting her children. The father flees to survive. He's made to feel real bad about having a flight reflex and a survivor's instinct, but such guilt (for me) implies the stranglehold of relationship on individuals and civilized behavior's ill-fitting dalliance with basic instinct. I understood why Ebba attacked her husband and accused him of not being a good father, but the manner by which she tries to get everyone to agree with her seems stereotypically manipulative and hysterical. She even judges a woman she converses with in the bar for believing she can have a husband as well as extramarital affairs. "Why can't I have both?" the woman argues.

Interestingly enough, in the film's final sequence, when Ebba has another panic attack in the bus leaving the lodge and convinces the passengers to disboard because the driver is going to kill them all, the only one who doesn't leave is the woman from the bar who doesn't take to such black-and-white thinking and continues on with the bus. Gender stereotypes aside, there are all different kinds of men and women, I guess, expectations be damned.
Posted by Michael Guillen at 11/05/2014 01:24:00 PM