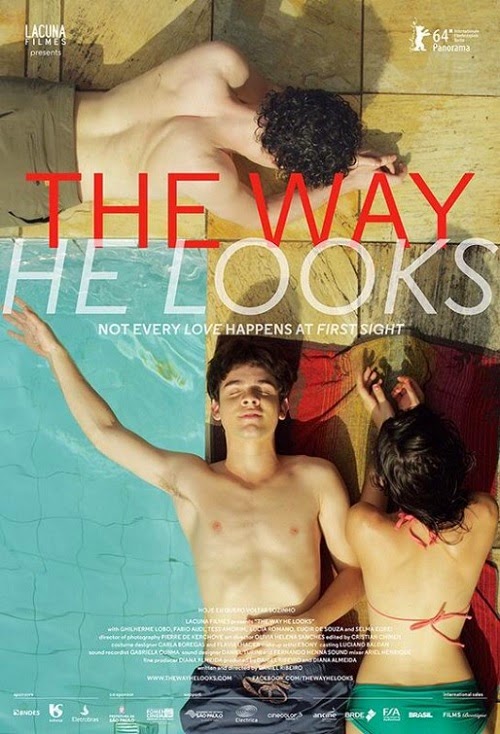 "It is only with the heart that one can see rightly. What is essential is invisible to the eye."—Antoine St. Exupery, The Little Prince.

Brazilian writer / director / producer Daniel Ribeiro is no stranger to Frameline. In 2008, he screened his first short film Cafe Com Leite (You, Me, Him) and followed up in 2010 with Eu Não Quero Voltar Sozinho, which was received so favorably that it inspired him to develop the short into a full feature, Hoje Eu Quero Voltar Sozinho (The Way He Looks, 2014) [Wikipedia / Facebook], his entry for Frameline's 38th edition earlier this year. This tender coming-of-age film emerged as one of my favorites of the festival for blurring the line between ameliorative fantasy and actual possibility.

The Way He Looks had its world premiere at the 64th Berlin International Film Festival in February 2014, where it won the FIPRESCI Prize for best feature film in the Panorama section and the Teddy Award for best LGBT-themed feature. It was released to cinemas in Brazil on April 10, 2014 and was met with positive reviews from critics and audiences, ranking as the 5th most viewed film in the country on its first day of release. It has since been selected as the Brazilian entry for the Best Foreign Language Film at the 87th Academy Awards®.

Boyd van Hoeij's positive review for The Hollywood Reporter deserves credit for inspiring me to watch the film, as I've learned to trust Boyd's perceptions. He writes: "Ribeiro has impressively fleshed out the material into a full narrative, with not only added conflict and a convincing gallery of supporting characters but also an entirely new focus on the quest for independence of the blind lead." At Variety, Jay Weissberg remarks: "Daniel Ribeiro's gay coming-of-age debut has an undeniable appeal ... this is a gay story, done with tenderness and capturing the hesitancy of expressing affection when rejection can have ugly consequences." As Rod Armstrong synopsized in his program capsule for Frameline, "Daniel Ribeiro has fashioned a magnificent film about teenage love and friendship. Leo and Giovana are best pals, who spend time sunning themselves by the pool and wondering about their futures. As a blind kid who craves his independence, Leo is feeling stifled by his well-meaning parents and hopes to study abroad. Giovana just wants a date—preferably with the recently arrived Gabriel, with his good taste in music and aloof charm.

"A school project pairs the two boys, and Gabriel is effortlessly welcomed into Leo's friendship with Giovana. The dynamics change, however, when sexuality enters the picture. As Gabriel and Leo spend an increasing amount of time together, Giovana feels like she's losing both her best friend and her potential new boyfriend. In the meantime, Leo realizes a growing romantic attachment for the mysterious Gabriel, and a big school party brings all of these tensions to a boil. Throughout the film, Ribeiro is beautifully attuned to the temperaments of his characters and charts their mood swings perfectly. He is similarly expert in portraying the ebb and flow of youthful friendships, and the way romantic attraction can sneak in and overwhelm the unprepared. The Way He Looks is warm, funny, and remarkably well acted—and one of the best film about boys in love since Beautiful Thing."

What follows is a loose transcript of Ribeiro's interaction with his enthusiastic Frameline audience at the film's Monday evening screening at the Castro Theatre (June 23, 2014).

The inspiration for The Way He Looks came from Ribeiro's ruminations on the first time he felt himself attracted to another body, which—he considered—was a visual memory. As he asked his friends the same question, they all confided that their first loves were intimately linked to a visual memory. This made him wonder what it would be like for a blind person to fall in love for the first time, not knowing if the person they had fallen in love with was young or old, ugly or handsome, arguably even male or female? How would that affect one's sexual orientation? Let alone address the issue of where our feelings of sexuality come from? Some people believe individuals are born gay, but others do not. Posing a blind gay character was an interesting way for Ribeiro to approach the idea that a gay orientation is something that comes from within and is not introduced or influenced by external factors.

In English the film's title bears a double meaning. It can refer to how Leo looks at the world or the way Gabriel looks to him. In Portuguese, that double meaning is not quite the same. There, they were playing with the titles between the short and the feature narrative. The short, Eu Não Quero Voltar Sozinho, literally means "I Don't Want to Go Back Alone". The feature narrative, Hoje Eu Quero Voltar Sozinho, reverses that with "Today I Want To Go Back Alone." This titular sense of independence is one of the changes Ribeiro made when converting the short into a feature-length film and it offered a positive change to Leo's character in the translation. Fans of the short film were worried that Leo and Gabriel were not going to get together in the feature. People were always saying to him, "I hope you didn't change the ending?" The ending didn't change. What changed was Leo's struggle for independence. The choice for the English title was a conscious appreciation of its word play. Further, the decision to have Leo enter a foreign student exchange program spoke to his increased independence and his refusal to run away from what he feared facing. 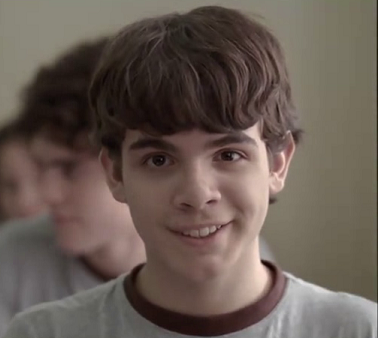 Ribeiro's own fears when he was casting for the short film was that he would never find a 16-year-old actor who could play a blind person; but, in the first round of auditions, Ghilherme Lobo showed up and he did "that thing with his eyes" and Ribeiro knew he had found his Leo. Once Lobo was cast, and with his main fear resolved, Ribeiro knew the rest would flow; but, he still had to find actors to play across from Lobo with perfect chemistry. First, he found Tess Amorim to play Leo's best friend Giovana; "they were great together." It proved a bit more difficult to find the actor to play Gabriel and Ribeiro resorted to asking around if anyone knew anyone who could play the role and "through the friend of a friend of a friend", they finally found Fabio Audi. Fabio was already 21 when he played Gabriel for the short film, and 24 by the time he was cast in the feature. "He was old," Ribeiro joked, "but good at being young."

Despite it being "a gay film with a blind character", The Way He Looks opened well in Brazil, no doubt to its universal coming-of-age themes. Critics and audiences likewise praised the film's soundtrack. Belle and Sebastian were Ribeiro's favorite band and he wrote their song "There's Too Much Love" into his script even before they began shooting. The rest of the songs were added during the editing process, some originally composed, some—like Marvin Gaye's "Let's Get It On", David Bowie's "Modern Love", and Arvo Pärt's "Spiegel em Spiegel"—seamlessly incorporated later. It was important for him that the songs were not incidental and that they made "sense" within the film. Bowie's "Modern Love", for example, replaced an earlier One Direction choice that the band would not authorize, but which ended up working better for the party scene.

An audience member asked Ribeiro to talk about the scene where Leo starts seeing Gabriel in his dreams, and wondered how Ribeiro decided to visualize that? Because he was blind without a sense of visual reference, it's most likely that Leo's dreams would have been black; but, of course, Ribeiro didn't want to do that. He wanted to translate a blind person's dream into film in a different way, primarily by expressing what Leo was feeling. Without a general concept of what was going on, Leo could only experience pieces of things, a bit of Gabriel, a little bit of another character Karina, and so on. He felt that was a nice way to understand Leo's dreams.

One audience member expressed his appreciation that Ribeiro had written a character with disabilities into his narrative, but questioned if Ribeiro had considered casting a real blind actor? Ribeiro answered that when they first started casting, that was a possibility because, as he mentioned earlier, he wasn't sure if he was going to be able to find a young actor to play a blind person; but, once Ghilherme Lobo appeared in the first week of casting and was just so perfect for the role, the quest for casting the character ended. But he admitted it would have been interesting to work with a blind actor. 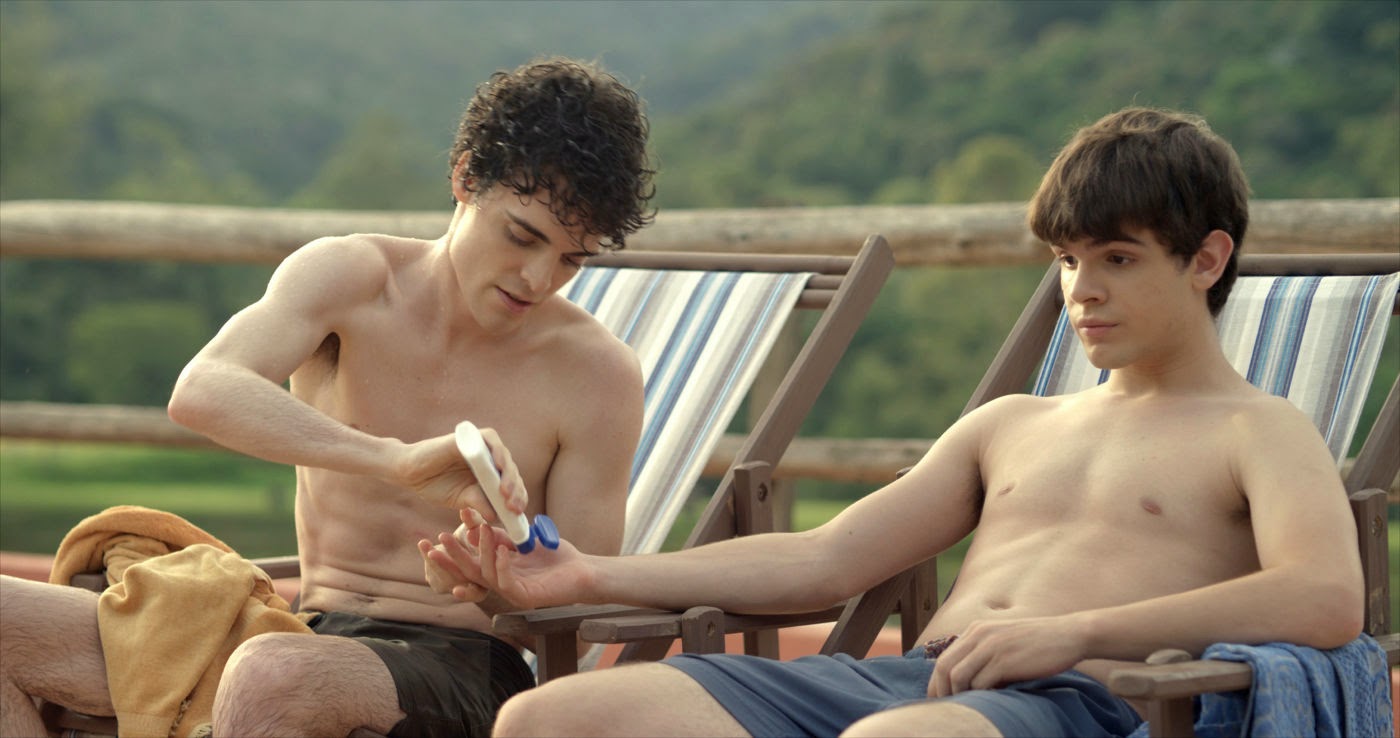 Another asked what was the most difficult aspect of converting his short film into a feature length film? The short film starts with Gabriel in the class room to the stolen kiss with Gabriel. The short was uploaded to YouTube and made available to anyone who wanted to watch it and so when it came to making the feature, one of the challenges that presented itself was that there was already an existing audience who had a lot of affection for the short so how would he tell the same story in a slightly different way without betraying their affection? He manipulated his script in various ways to keep true to the soul of the short, by way of references to key moments in the short, such as the stolen kiss.

When the microphone came to me, I first praised Ribeiro for his lovely romance that, in my estimation, reflected the best of queer cinema by reaching beyond our identity stories to achieve communication with a broad world audience. A remarkable achievement. Then I asked: "As a romance, it ended happily with a wonderful moment of brave defiance. I'm curious to know if—among queers in Brazil at that age—there is that kind of bravery existing at this time?" Ribeiro confirmed that, yes, indeed, such bravery exists among the young gays in Brazil. Such moments of resistance against homophobic bullying are entirely possible. What happens the next day, however, is another question. But young gays in Brazil aren't hiding anymore and though—as seen in the movie—there are some who are not okay with that, young gays are out and in the open and that's a good thing. Part of it is that young people relate to the characterizations of gays in media, as more and more films and television programs feature gay characters in positive representations. They see that being gay is okay and possible. They see that it's not something that has to be a problem.

Kudos to Strand Releasing for picking up the film for North American distribution and to David Lewis at The San Francisco Chronicle for favorably profiling the film upon its San Francisco run at the Opera Plaza: "If Americans ever start making films like this, the world will be a better place." Further, be sure to check out Pam Grady's Chronicle interview with Ribeiro.