The Fantasia International Film Festival (Fantasia) will unveil the world premiere screening of mumblecore icon Joe Swanberg's recently completed 24 Exposures (2013) as part of its Camera Lucida section. The feature stars filmmaker Adam Wingard (who, at 19, premiered his first film, Home Sick, at Fantasia) and his constant collaborator Simon Barrett, the director / screenwriter duo behind A Horrible Way To Die (2010) and You're Next (2011). On his Twitter feed, Swanberg describes 24 Exposures as his "fantasy version of Godard directing a Zalmon King script for Showtime in 1991," and his "fever dream of Herzog directing episodes of Red Shoe Diaries and Silk Stalkings."

Wingard, a gifted cinematographer who also lensed Swanberg's Silver Bullets (2011), plays a fetish photographer whose models begin to turn up dead, with Barrett portraying a melancholic cop tasked with investigating him. Swanberg, director of Alexander the Last (2009) and Drinking Buddies (2013), previously collaborated with Wingard and Barrett on Autoerotic (2011) and the anthology horror hit V/H/S (2012). As an actor, Swanberg also collaborated with the filmmakers several times, playing lead roles in A Horrible Way To Die and You're Next, the latter exhibiting Swanberg's consummate comic timing. 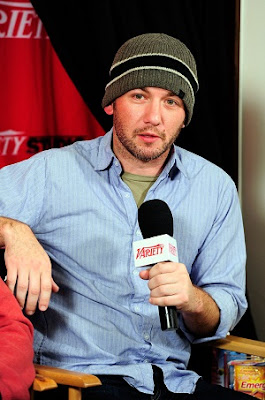 On a related note, Fantasia 2013 will showcase the Quebec Premiere of Wingard's brilliant You're Next the night before 24 Exposures, offering their audience the rare chance to observe the flipping of an actor / director / screenwriter creative relationship from one night to the next. Joe Swanberg will host both screenings.

The Wayback Machine takes us to an Evening Class conversation with Wingard, Barrett and Swanberg when A Horrible Way To Die had its world premiere in the Vanguard sidebar at the 2010 Toronto International Film Festival.
Posted by Michael Guillen at 7/05/2013 10:49:00 AM