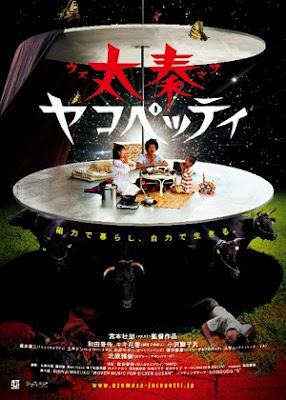 Uzumasa Jacopetti (Dir.: Morirô Miyamoto, Japan, 2013)—"Taking some elements from the bizarre, unpredictable worlds of Jean-Pierre Jeunet and Michel Gondry by way of the blood-soaked, hyper-real, wholly subversive and violent video days of Takashi Miike," writes Ariel Esteban Cayer, Uzumasa Jacopetti chronicles a father's one-track-minded quest for his family's happiness as it warps into murderous, absurdist carnage; a uniquely mesmerizing, magical, magnetic mind-melt of a movie, heralding the return of true underground Japanese cinema. Cayer further characterizes Uzumasa Jacopetti as a "relentlessly strange downward spiral of equally surreal and unnerving family hysterics." Bemusedly scratching my head at the film's North American premiere at Fantasia, I finally allowed its playful viscerality to take hold.  This was an absolutely perfect film to begin this year's Fantasia experience as it is the kind of rare entry that only Fantasia can offer.  I just don't see how it would fit in any other film festival anywhere else, and underscores for me Fantasia's brave and exploratory curatorial strengths.  Official site [Japanese].

At Midnight Eye, Tom Mes stages the importance of an independent Japanese film like Uzumasa Jacopetti. He writes: "Odd but also oddly endearing, Uzumasa Jacopetti has loopy ideas to spare, yet its 83-minute running time means the film never overstays its welcome."  And that's true.  The movie hardly makes any sense, but why should it when its breakcore electronic sound score makes the hair go up on your neck, and every now and then a deft note of humor redeems the most absurd of scenarios? The little boy and his mother are shot at, the mother is hit several times, and the little boy turns abruptly and pouts, "Stop it!"  It's sweet and charming and funny for being so unexpected.  Does the mother die from her bullet wounds?  Of course not.  There's no pretense at reality here; only Miyamoto's singularly unique vision of an overtly aestheticized alterity, with one strange set piece after the other. 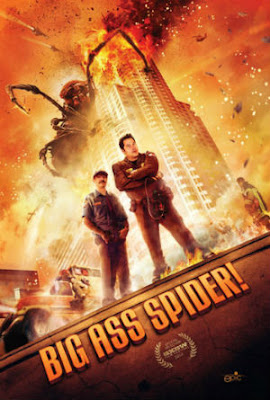 Big Ass Spider! (Dir: Mike Mendez, USA, 2013)—A volatile 50-foot spider wreaks havoc against the city of Los Angeles in this fast, funny and surprisingly smart arachno-coaster ride that's not afraid to enjoy itself but at the same time, never goes for the easy stupid. As Mitch Davis details in his program capsule: "A longstanding member of the Fantasia Family, Mendez first came to Montreal 13 years ago (!) with his delirious demon nun splatter epic The Convent, returning in 2006 with the intense Sundance hit The Gravedancers. Big Ass Spider is something Mendez has spent years working on, striving to deliver a big bug film that would make the subgenre proud—and redeem it from the current wave of awful SyFy channel quickies!" Official Selection: SXSW, Dead by Dawn, Boston Underground, Calgary Underground Film Festival 2013. The film's Quebec premiere was hosted by director Mike Mendez and producer Patrick Ewald. IMDb. Facebook.

Big Ass Spider! was everything I wanted it to be, with a creature designed to be a mix between a black widow and the queen mother from Aliens.  The comic comraderie between flubbish exterminator Alex Mathis (Greg Grunberg, Heroes) and his Spanglish wisecracking sidekick Jose Ramos (the consistently-clever Lombardo Boyar) kept the eight-legged antics in an appropriate tongue-in-cheek perspective.  It's fascinating how Grunberg can take ridiculously banal lines and phrase them in such a way that they're given authenticity and weight.  But even director Mendez had to apologize to his Fantasia audience for not providing a clean digital presentation.  His Blu-ray sputtered, half the sound was gone, and the resolution was off.  For its appearance at Fantasia, you would have thought he would have taken a little bit more care than popping in what appeared to be a homemade disk.  But there's no holding Fantasia audiences back from their unbridled enthusiasm and appreciation of the film, despite its technical flub-ups, and you have to admire these mewing hordes for saving this cinematic experience.  Nothing gets in the way of fun at Fantasia, even a faulty projection.  The film will have a theatrical roll-out in October, but I look forward to watching it with friends on my SmartTV in high-def, with beer and boo to spare. 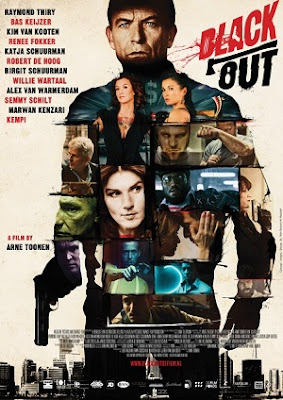 Black Out (Dir: Arne Toonen, Netherlands, 2012)—Crime may not pay, but it certainly entertains in Arne Toonen's Snatch riff Black Out, which is formulaic sure, but never derivative.  As Éric S. Boisvert lays out in his program capsule, "With the help of Mell Runderkamp's pen, Toonen delivers a production reminiscent of the early works of Guy Ritchie (Snatch) or Lasse Spang Olsen (In China They Eat Dogs), in which he mixes together several amusingly charismatic characters.... Arne Toonen compliments his colorful characters with a dynamic editing style and explosive art direction that weave together a suspenseful crime comedy brought to life by actors directed with unmatched dexterity." Official site [Dutch]. IMDb. Facebook [Dutch].

In the lead role of Jos, Raymond Thiry is particularly charismatic, with a touch of Pierce Brosnan and Sam Neill comingled to sophisticated effect. Political correctness has to be forfeited early on, however, as the script sadly relies on some wince-inducing stereotypes to shape certain characters, including lots of "negro" jokes and a sibilant gay villain whose death cues the audience to cheer. Really? Okay. In the wake of Trayvon Martin's unjust death, it's precisely such "wickedly funny" scenarios that throw up some red flags.
Posted by Michael Guillen at 7/24/2013 10:50:00 PM