The Weight (Dir: Jeon Kyu-hwan, South Korea, 2012)—Described by Alix Wagner-Bernier as "a melodrama verging on the horror genre", The Weight feels miserably oppressive and morbid at first as we're introduced to a hunchbacked and tubercular mortician and his transsexual brother, both betrayed in their own ways by their individual bodies.  They suffer their wretched and marginalized lives in a nether world otherwise known as Seoul.  But what could have remained an unkind and grotesque indulgence of freaks and misfits at the edges of society subtly uplifts into a sibling love story rendered poetic through compassion and an unnerving realization that death proves every body will eventually betray itself, whether the beautiful body of a celebrity pop star, or the deformed body of one of the netherworld's helmeted henchmen.  On the slab, all bodies are reduced to the same corporeal equation with the same incorporeal promise.   North American premiere. IMDb. Wikipedia.

The Weight had its world premiere in the Venice Days sidebar of the 69th Venice International Film Festival, where it won the 2012 Queer Lion, an award for the "best film with a homosexual and queer culture theme." It is the first Korean film to have won the prize. Something tells me, however, that this is not a film that would be selected for San Francisco's Frameline where softcore romcoms seemingly rule the box office.  The scene where the transsexual is bashed by two cute gay guys is particularly subversive.  Jeon Kyu-hwan was also awarded Best Director at the 16th Tallinn Black Nights Film Festival where the jurors stated, "Never wavering from his singular poetic style, Jeon Kyu-hwan deftly pulls the audience through a barrage of painful and extreme imagery into what in the end is a very touching film about love and acceptance."  He accomplishes this through a muted palette—the film looks like hand-tinted black and white—minimal dialogue, and meditative pacing.  I could have done without the literal butterflies as metaphors for the winging soul at film's end; but, up until then, The Weight impressed me for bravely skewering one taboo after the other. 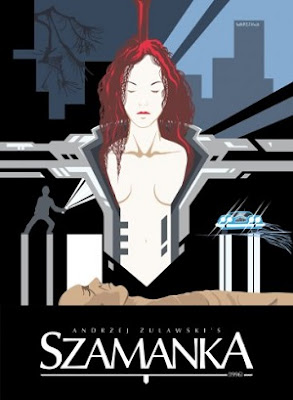 Szamanka / She Shaman (Dir: Andrzej Zulawski, Poland / France / Switzerland, 1996)—In his program capsule, Daniel Bird classifies Szamanka as one of Zulawski's "most outrageous films" and "further proof of Zulawski's use of the fantastic to explore themes and issues existing in a very real and concrete reality." He further contextualizes: "Szamanka is to date Zulawski's only film to be directed in Poland since the collapse of Communism in the Eastern Bloc. Whereas his previous films hid behind the guise of genre—war, horror and sci-fi—Szamanka is, in the director's own words, 'a film without a mask'. It presents a startlingly direct look on life in Poland after the fall of the Berlin Wall, in which the tyranny of Communist rule is displaced by ruthless protection rackets and a hopeless faith in the Catholic Church." The film's criticism of traditional morality and Catholicism, combined with its explicit depiction of sex, generated controversy within Poland where the film was nicknamed Last Tango in Warsaw by Polish critics. Szamanka screened during the 1996 Venice Film Festival. IMDb. Wikipedia.

With Zulawski on hand to accept his Lifetime Achievement Award from Fantasia, this was one of the hottest tickets at the festival, and the only film I know to be screened in 35mm.  This is one bat shit crazy—but beautiful—vision of feral eroticism and shamanic contagion.  By the time we reach the cross formed from cunts, we've recognized that the devouring feminine has been elevated to deity and men are mere sacrifices to her governing hunger.  The sex scenes are percussively energized and the film's climax a brilliant and shocking parody of civilization's spoon-fed manners.  They just don't make films like this anymore and they really should.
Posted by Michael Guillen at 7/25/2013 11:25:00 PM

Hello Michael, I was at the screening too but I didn't like the film as much as you did. I don't know, maybe its impact has waned since its release. I thought the general theme was well established from the get go and didn't engender new developments throughout the story. Otherwise I did find the performances exhilarating and some of the steadicam/tracking shots very beautiful.

Thanks for stopping by to comment, Hugo. Mileage always varies with films. That's something I actually enjoy. Some of the elements of the film were so oddly outdated, I agree, but for some reason that really appealed to me. What else have you seen at Fantasia that you might recommend?

Hey Michael, I'm looking forward to watching Richard Stanley's documentary "Another World" playing next Friday at 5PM. It is about a strange region in France where a lot of paranormal activity takes place. The soundtrack is composed by someone who did the music for a Jodorowsky film. Richard Stanley made a movie called Dust Devil which is very crazy and plays like an idiosyncratic independent action film. Reminds me a bit of Alex Cox (Repo Man) as a director.

I'm curious about the Joe Swanberg movie playing, "24 Exposures" which is supposedly crime-related, and more conceptual than his talky 'mumblecore' dramas.

Apart from that, I play it by ear everyday. Fantasia is such an exciting festival, everything is at the very least, surprising!

Hey Hugo, again thanks for stopping by to comment. was just speaking to Richard Stanley this evening at the Embassy regarding his current project and had the opportunity to listen to Simon Boswell speak on his scoring for--not only Richard's project--but several others throughout his accomplished career. Unfortunately, I didn't get the chance to see the world premiere of THE OTHER WORLD. Please let me know what you think. So far, THE BATTERY and THE DIRTIES have surfaced as my favorite films of the festival.