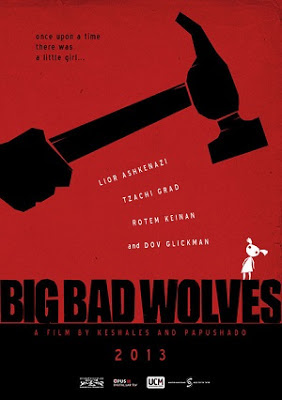 Big Bad Wolves (Dirs: Aharon Keshales & Navot Papushado, Israel, 2013)—It's an oft-stated supposition that one of the redeeming values of genre films—particularly horror, sci-fi, and thrillers—is the capacity to reflect the anxieties of the predominant culture. This cultural component is essential to framing an appreciation of Big Bad Wolves, the sophomore effort by Aharon Keshales and Navot Papushado (Rabies, 2010), which seeks to introduce the violent revenge thriller to home turf audiences more accustomed to dysfunctional family dramas and war-torn narratives. Keshales and Papushado have negotiated this challenge by premiering Wolves first at Tribeca (where it emerged as the single best-reviewed title in that festival's lineup) and now at Fantasia (where I predict comparable accolades) before opening theatrically in Israel in coming weeks. Their strategy appears to have worked as critical buzz has rallied anticipation of the film’s theatrical release attended by rumors that Wolves is being considered for the Israeli Oscars®. This negotiated strategy is the prime achievement of Big Bad Wolves, let alone that it is enthralling entertainment that satisfies international appetites even as it challenges national ones.  Yet another argument for the international reach of genre films.

Described in its official marketing as "a brutal comedy for a mad mad mad mad world", this gripping, genre-bending tale of vengeance and fury kicks off in Lars von Trier slo-mo with a game of hide and seek, beautifully lensed by Giora Bejach and powerfully scored by Frank Ilfman. In an elegant, throwaway visual reference to the Grimms fairy tale, a little blonde-haired girl in a red jacket is abducted and brutally murdered. A suspect spotted near the scene of the crime (newcomer Rotem Keinan as mild-mannered schoolteacher Dror) is apprehended by local official Miki (charismatic favorite Lior Ashkenazi) who enlists two thugs to beat Dror up during questioning. Unbeknownst to Miki, his tactics are caught on cellphone by an eyewitness who broadcasts the footage on YouTube, ensuring his captive’s release and costing him his job. This narrative detail is of import in that it underscores how citizen surveillance hobbles the ability of law enforcement to do their jobs even as it cogently critiques the violence with which those jobs are effected.

Miki goes renegade, stalking Dror, while at the same time the two are being stalked in turn by the dead girl’s father Gidi (veteran actor Tzahi Grad). This triangulation ensures mounting vigilante tension in the vein of Dirty Harry. What ensues are some nailbiting chase scenes, unexpected twists and turns, and a moral ambiguity about the nature of vigilante justice. All of this might seem like overly familiar territory but what elevates this effort is how Keshales and Papushado accent their drama with mordant humor; another blend generally unfamiliar to Israeli audiences. The balance between action, drama and comedy is brilliantly pitched, which distinguishes it from such films as The Silence and Michael, let’s say, where the unwholesome subjects of infanticide and child abuse are never played for laughs. Which leads to a minor, but for me interesting, point. In Dark Nature, Lyall Watson’s study of the nature of evil, Watson proposes a hierarchy of evil that determines all subsequent definitions. The ultimate evil recognized world-wide, Watson suggests, is any crime that works against the preservation of the species, of which the murder of children is consensually ranked high on the list. There’s no ambiguity there. Ambiguity arises in the evils committed in response to such a horrific act when men take the law into their own hands to avenge the death of children.

Although Keshales and Papushado are insistent that they have purposely avoided politicizing their film, its violence aptly reflects the perpetuation of vengeful atrocities in the Mideast. Keshales and Papushado introduce an Arab character on horseback who contests all stereotypes and who insinuates that the true threat to Israeli society comes from within, not without. This is, of course, a prickly subject and it will be fascinating to see how Israeli audiences react to the implication.  IMDb. Facebook. 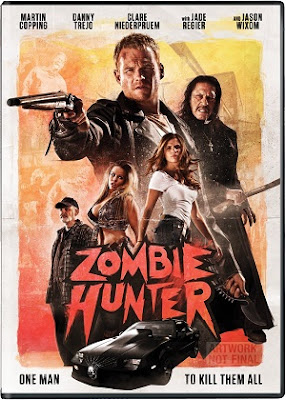 Zombie Hunter (Dir: K. King, USA, 2013)—It was clear the Fantasia audience was struggling to enjoy the world premiere of Zombie Hunter, appropriately scheduled as a midnight screening.  King is clearly emulating Grindhouse: Planet Terror on a vastly reduced budget.  It comes off as a SyFy knockoff with sex, vomit and fart jokes to entertain the less discriminating. Once Danny Trejo is eliminated from the cast early on, it all capsizes into derivative formula.  Sad to say it almost works, but not quite.  Its poster art ensures robust DVD rentals.