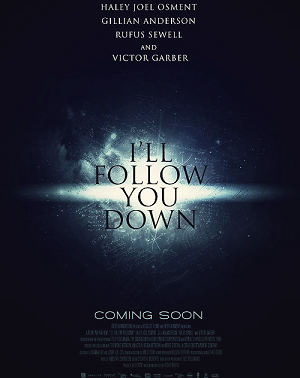 I'll Follow You Down (Dir: Richie Mehta, Canada, 2012)—Richie Mehta, the Genie-nominated director of Amal, and producer Lee Kim hosted the world premiere of I'll Follow You Down, a time travel tale whose genre underpinnings serve an existential if overly-subdued meditation on whether or not the consequences of poor choices can (or even should) be corrected. Well-intentioned and adequately realized, the film nonetheless made me wish I could go back in time and recover the 90 minutes I had just spent. That’s possibly my failing, more than the film’s, as I was anticipating something quite different than what I got. Less flashy than thematically comparable films such as Nacho Vigalondo’s Timecrimes (2007), Rian Johnson’s Looper (2012), or for that matter George Pal’s quintessential The Time Machine (1960), I’ll Follow You Down tries too hard to make its science convincing, which results in a very talkey script and lots of chalkboard scrawling (let alone a fairly ridiculous scene where our protagonist uses a felt pin marker to graph out mathematical formulas all over a basement wall). All that effort doesn’t really translate into a story that is more intelligent, even if more plausible. Though I will admit the film’s strong ending took me by surprise and redeemed the narrative with a powerful emotional punch.

Performances are solid, particularly Gillian Anderson (The X-Files, House of Mirth) who I adore, and who drew me into the film in the first place. She could clean out a refrigerator and manage to find enough emotional nuance between the mustard and the mayonnaise to keep me captivated. Here, she plays a woman devastated by the unexplained disappearance of her husband. Haley Joel Osment (The Sixth Sense, A.I.) hasn’t been on my radar for some time and I’m not sure this blip will keep him there. Again, that’s my failing. It’s hard for me to separate the child star from the adult he’s become and his performance here doesn’t reconcile the difference. Victor Garber does what he always does; but, Rufus Sewell impressed me for the emotional credence he gives to a small role with such short screen time, literally bringing the film home in its final scene. The fade-out on his smile was mysterious and captivating. I really wish I could have liked this film more. I certainly wanted to. IMDb. Facebook.

Love Eternal (Dir: Brendan Muldowney, Ireland, 2013)— By contrast, losing a father as a child haunts Ian (Robert de Hoog) much more provocatively (and engagingly) in Brendan Muldowney’s Love Eternal, based on Kei Ôishi’s novel In Love With The Dead. This moribund but fascinating tale demonstrates the unyielding grip of the death horizon on the living, coloring suicidal ideation with just enough mordant humor to set up an initiatory journey that stumbles its way towards hope. As IMDb synopsizes: “the film centers on an isolated and death-fixated young man who tries to make sense of the world, and his existence, in the only way he knows how ... by getting closer to death.”

Immaculate cinematography by Tom Comerford, a compelling score by Bart Westerlaken (emulating the winding down of clocks), and an especially poignant and pivotal performance by Pollyanna McIntosh complement de Hoog’s central, moody portrayal of a young man who has not yet discovered that love is a beautiful enough reason to live. IMDb.