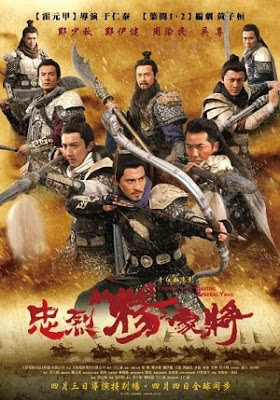 I’m the first to admit that I’m not necessarily a Hong Kong film enthusiast, and Saving General Yang ended up on my itinerary by default because there was simply nothing else of interest screening in the same time slot. Further, I arrived at the Imperial Theater a bit pickled from one too many Triple Belgian Zoots at the Benelux and experienced difficulty staying awake for the first half hour. It didn’t help that the film's CGI was a bit threadbare, or that General Yang and his seven sons were nearly indistinguishable from each other, with very little characterization to latch onto. Surprisingly, it was the film’s melodramatic elements that emotionally moved me as one by one the sons sacrificed their lives for family loyalty.  And I sincerely appreciated Ronny Yu's video message to his Fantasia audience apologizing for his not being able to be there in person but wishing them an enjoyable screening.

As a study in the pop culture of China, I was intrigued that the legend of Yang Ye had been used repeatedly in their national cinema. As detailed by Guillaue Desbiens in his program capsule, “Patriarch of the popular Song Dynasty (960-1127), a clan supported by many valiant male and female soldiers. Yang Ye is a genuine hero to the Chinese people. Curiously enough, it has most often been the women combatants that have garnered more attention these last centuries, being the subject of such films as the classic Shaw Bros.’ The 14 Amazons (1972) and the more recently Legendary Amazons (2011). The avenging brothers have also had their story adapted numerous times for both film and television, most notably 1984’s The 8 Diagram Pole Fighter starring the incomparable Gordon Liu.” In gist, I would say that the primary value of Saving General Yang for me is as introduction to this suite of films.  My interest is piqued in taking a look at these earlier efforts.

Without knowing much about the genre, my reactions track with the critical record. At Twitch, James Marsh deems Saving General Yang "solid with glimpses of greatness." At SBS, Don Groves admits: "Yu has a very good eye for spectacle but a tin ear for dialogue and a slapdash approach to fleshing out characters, and thus fails to redress obvious defects in the screenplay by Edmond Wong.... The result is a handsome looking but sporadically satisfying, gory tale of betrayal, familial loyalty, bravery and sacrifice." "It's as close to a Chinese blockbuster as can be with a lightweight narrative propped up by heavy duty battle scenes," writes Stefan S. at A (Nutshell) Review, and adds, "Who would have thought though, that the more dramatic moments in the film, turned out to be its key strengths...." 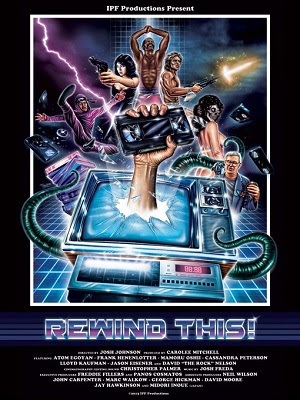 Rewind This! (Dir.: Josh Johnson, USA, 2013)—Along with business partner James Kennedy, I opened the first video stores in the San Joaquin Valley, California in the mid-‘80s. At that time, there was one video store in San Francisco, Captain Video, which James and I spotted one evening walking to our car after dinner. We walked in, took a look around, and James stated, “We can do this. But we shouldn’t do it in San Francisco. We should open a store where we’d have no competition.” We decided upon Modesto, California, opened Modesto Video, and in ensuing years branched out to Manteca, Turlock, and Stockton. Ours was a thriving business supporting the advent of VCRs in the average household. Whereas James took care of the floor and merchandising, I handled personnel and inventory (and wooed those rich ranch matrons to collect every John Wayne movie imaginable).

These were exciting days for me, watching the boxing match between Beta and VHS (we know who won), stocking shelves with titles I would discover from the pile of pulpy catalogs on my desk, and discovering through the process the bona fide weirdness (if not hypocrisy) of consumer appetites. It used to creep me out a bit that Angel (1984)—the story of a teenage prostitute—was our number one record-breaking rental in that allegedly God-fearing community, which at one point organized its churches to boycott our store for renting X-rated movies. The profits we made from Angel alone financed the entire section on Classics that I developed for the store (long before TCM made such titles readily available).

I lasted three years in that business venture, made a good return on my investment, but walked away once I saw the larger chains step in with dollar rentals, disgruntled when the State of California used our business as a test case to retroactively tax video stores for late charge fees. At that point the writing was on the wall for me, I sold out my portion of the business, and used the proceeds to finance the next phase of my life: adventuring in Central America. James tried to rally on for a few more years but ended up going bankrupt. So it was with considerable fondness and a hefty dose of nostalgia that I watched Rewind This, though—admittedly—I have never felt compelled to tattoo a videocassette onto my arm to honor the fading heyday of the medium.  Retaining a healthy collection, winnowed down as it was once I moved away from San Francisco, suffices. At that time I couldn’t give videocassettes away, other than the few picked out of the boxes I left out on the street. Eventually, I had to pitch hundreds of those little black rectangles into the trash bin. I only kept those titles which were not available in any other medium and—as has often been pointed out—each time cinephilia transitions to a new medium, huge swathes of the once-available inventory are lost.  I regret now that I didn't have enough time to traffick those titles on eBay.  But who knew there would be a revival of interest?  As with any consortium of talking heads, some are more interesting in this documentary than others, and it pleased me to hear intelligent commentary from my former Twitch editor Todd Brown and San Francisco colleague James Rocchi, let alone quips from all-time favorite Cassandra Peterson (“Elvira”).

In his program capsule, Ted Geoghegan describes Rewind This! as "a passionate geek doc that not only follows the life and death of the videocassette, but also the amazingly complex back story of how it became a format for the ages—transforming from afterthought into obsession. Interspersed with endearing insight into the lives of countless modern-day VHS collectors and enthusiasts, this stand-up-and-cheer industrial underdog story sheds light on why geeks and everymen alike can't stop thinking about those temperamental plastic black cases that gave us so many hours of home entertainment." Official site. IMDb.

At The Hollywood Reporter, John DeFore notes that Johnson's nostalgic documentary provides "an entertaining, sometimes enlightening history of the video format." At IndieWire's Playlist, Cory Everett describes Rewind This! as "both a history lesson and love letter to a format." At Screen, Mark Adams spells it out succinctly: "A thoughtful and entertaining elegy to the joys of the VHS tape, from its poor picture quality and ropey pan-and-scan through to is inventive marketing, colorful packaging and sheer breadth of titles available, Josh Johnson's documentary Rewind This! celebrates not just the fan-boy collectors but also the product that changed the face of the film business." He predicts this "charmer of a documentary ... will strike a chord with audiences who have grown up with the format." 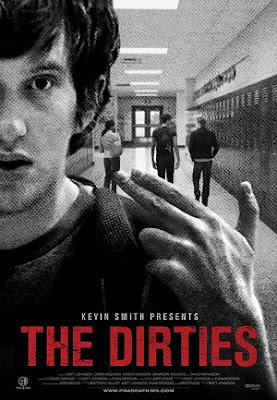 The Dirties (Dir: Matt Johnson, Canada, 2013)—An astonishing, illuminating and surprisingly funny film, The Dirties takes on the mortifying topic of high school shootings with an insight and wit that will leave you slack-jawed. And deeply haunted. Winner of numerous awards, including two at this year's Slamdance. The Dirties' Quebec premiere was hosted by the incredibly eloquent and charismatic director / actor / co-writer Matt Johnson, along with camera operator Andrew Appelle (who advised later at The Embassy that he was responsible for the rabid mosquito sequence in last year's Fantasia entry A Little Bit Zombie). Official site. IMDb. Facebook.

A tremendously entertaining low-budget feature that implicates the culpability of its audiences by way of an unidentified camera operator, The Dirties emerged as one of my top two favorite films at this year's Fantasia (the other being the no-budget "zombie" flick The Battery).  Its restraint emphasizes its straight-to-the-point narrative thrust and its final relay between the two lead characters one of the most disturbing endings I've seen in years.

At Filmmaker, Brandon Harris describes The Dirties as "a poorly shot, cleverly assembled rough hewn verite narrative" that "elegantly and depressingly explore[s] the dangers of high school bullying" and "the kinds of empty, pop-culture obsessed lifestyles most American teenagers are subjected to." At the San Francisco Bay Guardian, Jesse Hawthorne Ficks exclaims the film is "controversial and inspired" and "an utterly brilliant, unstoppably hilarious found footage entry that follows two high school cinephiles as they try and make a documentary about 'bullying,' while they themselves continue to get uncomfortably bullied at their own school." Ficks stresses "the level of honesty, originality, and terrifyingly timely subject matter this filmmaker brings to this incredibly contemporary story." At Twitch, Ben Umstead states Johnson exhibits "mad style and intelligence" with his "bromance", which Umstead categorizes as "something so fresh, so bizarre and just as sincere as it is unsettling."
Posted by Michael Guillen at 7/31/2013 04:58:00 AM

Michael, I'm leaving a rare comment on this months-old post that I dug up while researching the Another Hole In The Head Film Festival- which is screening The Dirties Tuesday; hope I can make it.

Just thought I'd mention that, though I must admit I sometimes tune out your festival coverage when I know I'm not going to be able to capitalize on it any time soon, I find it invaluable later on down the road. And to say that Eight Diagram Pole Fighter is my all-time favorite kung fu movie, and that I really loved reading your account of operating Modesto Video as context for writing about Rewind This! I think you'd told me some of the details before, but it's great to have it all in one place.

What a lovely little gift to find at the beginning of my December stocking. Thank you, Brian, for taking the time to indulge the old-fashioned practice of leaving a comment. Such a treat. I truly hope you get a chance to see The Dirties!! My best.