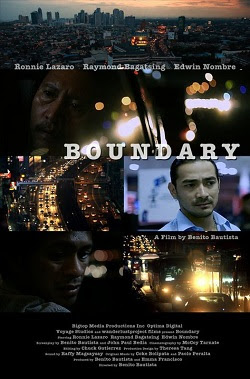 A half hour into Benito Bautista's Boundary (2011) [Facebook] and I'm mesmerized by Bautista's orchestrated sense of foreboding, McCoy Tarnate's neon-stained and vehicularly claustrophobic cinematography, and the grating disquietude of Coke Bolipata's anxious violin score. This is Manila neo-noir, darkly beautiful and atmospheric with distrust, uncertainty, desperation and pathos.

As synopsized by Joel Shepard for YBCA's "New Filipino Cinema" series: "Boundary is set in the crowded urban roadways of Manila during Christmas. A nervous taxi driver picks up an easy-going businessman as his last passenger for the night. Their journey together to a far-flung suburb takes a wrong turn in more ways than one, and becomes a wickedly tense portrait of urban anxiety and shifting identities."

Winner of the NETPAC Award at the 2011 Cinemalaya Independent Film Festival as well as a special mention in that festival's South East Asian competition, it's easy to understand how Boundary ended up on Oggs Cruz's Top 15 Feature Length Filipino Films of 2011 at Lessons From the School of Inattention, where he praised a storyline "that unites top-level corruption with bottom-level criminality."

That storyline bears striking similarities to the urban narrative of Amok (2011), undoubtedly because it shares John Bedia's co-authorship. "New Filipino Cinema" provides a fantastic opportunity to experience Bedia's burgeoning screenwriting talent, as both of his film credits to date have been programmed into the series. Whereas Chard Bolisay was referencing Amok when he wrote that the film's denouement was a "gala of predictable outcomes and unpredictable victims", his observation could just as easily apply to Boundary. Bedia likewise seems drawn to the interior world of vehicles, momentarily safe from but ultimately encroached upon by the menace of Manila. He scripts the permeability of this boundary. 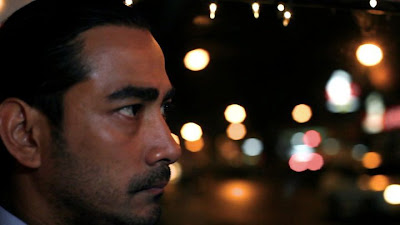 How directors Lawrence Fajardo and Benito Bautista have stylized the mise-en-scène of Bedia's confined vehicular sequences in their respective films is an equally fascinating consideration of the auteurial conversion of word to image. Amok's diurnal and sweltering visualization is in sharp contrast to Boundary's lustrous nocturnality, awash with vivid oranges and greens bleeding in from the city's neon lights, as well as the Christmas lights strung up within the cab's interior. Tarnate's containment of so much color and movement within the constraints of the vehicle is downright masterful. I found myself frequently intrigued by his shifting camera placement and wondering how even one more person (i.e., the cameraman) could fit into an already crowded cab? 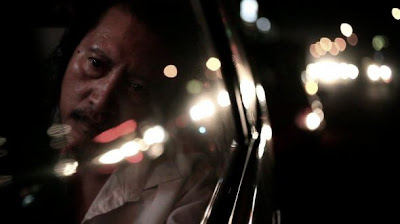 In the role of the guilt-ridden cab driver, Ronnie Lazaro—who I last saw in Affliction (Yanggaw, 2008), reviewed by both Oggs Cruz and Chard Bolisay—exudes the sweaty desperation of Manila cab drivers sympathetically described by Cruz at Lessons From the School of Inattention. His fare, the ruggedly handsome Raymond Bagatsing, suggests a different temperature of menace. Together, within the confines of the cab and the guarded limits of their conversation, they reflect in microcosm the shady ways of the outer world.

Boundary negotiates its interior and exterior spaces at YBCA's "New Filipino Cinema" on Friday, June 8, 9:00PM, with Bautista in person to Q&A with his audience. I envy this opportunity as Boundary has emerged as one of my favorites from the YBCA series. Ticket info can be found here.
Posted by Michael Guillen at 6/01/2012 09:31:00 PM

Great review on BOUNDARY. I've watched it when I was in Manila during the Cinemanila festival and am a friend of the director. I've asked Benito how he came up with the story and he said it was born out of his taxi cab rides all over Manila when he was working on another film. He conversed with the taxi drivers and listened to their stories and that's how he began to write Boundary. Bedia only came in at the latter part of the writing process. Since Benito's been living in the States for so long, he just needed to check with a local writer if some of the nuances are natural or not to their environment.

BOUNDARY was my favorite so far too. And Joel told me during an interview for an upcoming VCinema podcase that an actor from the film will also hopefully be in attendence for the Q&A. Not one of the main actors, but one of the actors who 'end-up' in the cab later. So more reason to catch the screening if you can!

Totally enjoying your posts on the series.

Great tip, Adam! Wish I could be there to meet Benito and his surprise guest.