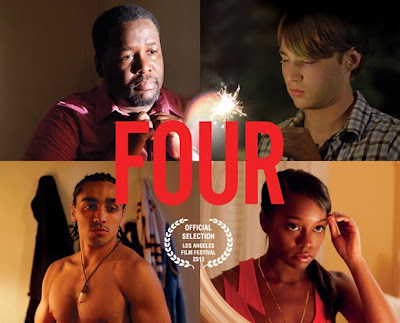 It seems anymore that an American independent doesn't have sufficient credibility unless it's mounted one or two successful crowd sourcing campaigns. Joshua Sanchez's performance-driven feature debut Four (2012) [Official site / Facebook] has managed to achieve just that, securing its requisite $5,000 in Kickstarter funds for the film to traffic to its world premiere at the recent Los Angeles Film Festival. I usually suffer from compassion fatigue when it comes to Kickstarter campaigns—as a film writer I'm hit up by every project imaginable—but, supporting Four was a no-brainer. This film—adapted from the play by Pulitzer Prize finalist and Obie winner Christopher Shinn—brightens the cinematic landscape with its eschewal of lazy softcore porn for an authentic and complex treatment of gay characters. 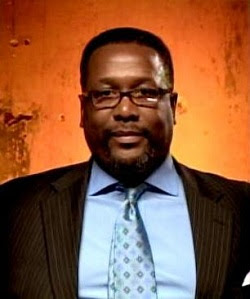 Initial reviews from L.A. have been stellar. At Variety—though couched in staged reservations—Andrew Barker notes that Four spotlights "a quartet of furiously committed performances, ...burnished by vivid, atmospheric lensing." At indieWire, Emma Bernstein characterizes Four as "a quiet and poetic meditation on the solitude of the human condition." At Ioncinema, Nicholas Bell states that Four "manages to create a brooding atmosphere that slowly tightens its grip, sloughing off familiar tropes concerning race and sexuality and hitting enough subtle notes to become more intense the more quiet it becomes."

In the Bay Area, where Four is featured in the 36th edition of San Francisco's Frameline Film Festival, Jackson Scarlett observes in his festival capsule that Four "upends typical expectations of race and gender, reading Shinn's drama with an intensity that invariably invites comparison to the early films of Neil LaBute for its candor, carnality, and explicit focus on the mechanics of longing." LaBute, in fact, serves as Four's Executive Producer. At the SF Bay Times, Gary Kramer writes: "An outstanding character study, Four boasts a quartet of brilliant performances—with [Wendell] Pierce in particular a standout—and a seductive rhythm that will rivet viewers as the characters come to terms with themselves and each other."

Wendell Pierce—familiar to fans of HBO programming The Wire and Treme—bravely tackles the role of Joe, a closeted black, middle-aged, married man out on an internet sex date with young white teenager June (Emory Cohen). indieWire asserts that "Pierce steals the show with his multi-layered performance that is often best at its quietest: small facial movements and seemingly inarticulate grunts illustrate everything the character is unable to say aloud." Variety adds that Pierce manages "to convey Joe's warm, big-brotherly qualities alongside his sexual menace" and argues that—as "the film's most pronounced relationship"—its illegality is neither judged nor whitewashed and "might almost seem an argument for old-school Athenian pederasty." 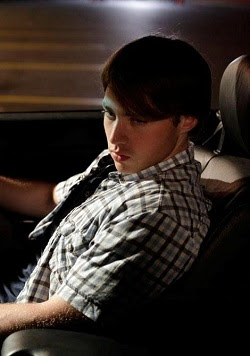 That argument wouldn't have any credence were it not for the hungry reciprocity of June in a knockout performance by Emory Cohen, familiar to fans as the troubled son on Smash. Brooding, petulant, indecisive but anxious for experience, Cohen tempers longing with self-loathing in one of the most accurate portrayals of teenage sexuality this reviewer has seen in some time. June's shift from cagey indecision to seductive certainty is one of the film's most sensual moments, even as its hidden truth is painfully accentuated by the expressions of fear and disgust flickering over June's face during his uncomfortable sex with Joe. That truth—that a young man must do whatever he has to do to gain experience and find himself—is both sad and sobering.

Consummate performances are also achieved by E.J. Bonilla as the thoroughly charismatic and wisecracking Dexter striving to find an identity past the fading glory of his high school basketball years. In a brilliant stroke of sound design, Michael McMenomy layers in the sound of a dribbling basketball when Dexter and Abigayle first kiss. Aja Naomi King delivers a tortured performance as Abigayle, Dexter's love interest and Joe's daughter who—with considerable less back story than the other characters—beautifully suggests the damage inflicted by her father's not-so-secret indiscretions. 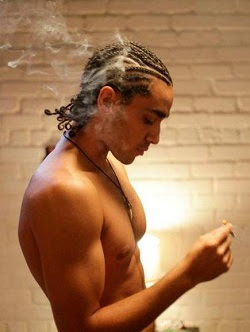 Shinn's script and Sanchez's adaptation offer insights riddled with conflicted American values. Offering to buy June some fireworks to celebrate the Fourth of July (the quintessential American holiday), June protests that fireworks are illegal in their town, to which Joe responds that breaking the law is a core American quality. This scofflaw attitude concerns not only their sexual liaison, but suggests that the rules that need to be broken are those that demand people desire in certain ways, when in truth they must desire elsewise. At film's end, Joe offers June a gift of condoms and sparklers: a transgressive blessing that confirms that rules must be broken in order to discover an authentic self.