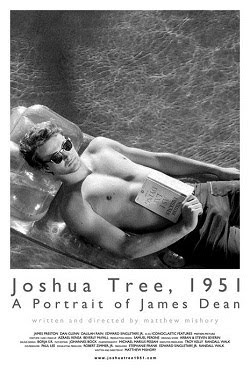 Arthur Rimbaud and Antoine de Saint-Exupéry are the twin literary spirits guiding Matthew Mishory's debut feature Joshua Tree, 1951: A Portrait of James Dean (2012) [official site / Facebook]—Rimbaud as an introduction to fire, and Saint-Exupéry as the patron saint of puers. Like Saint-Exupéry's Little Prince appearing and disappearing in the desert, Mishory's homostylized take on Hollywood icon James Dean queers the archetype of Dean's eternal youth, as imagined through his formative years at UCLA.

With much style and adequate substance, Joshua Tree, 1951: A Portrait of James Dean is more bio-fantasy than bio-pic, glorifying Dean's bisexuality and shrugging it down the runway like a fashion shoot this side of softcore gay porn. The film's narrative emphasis appears to be that life can "hurt so good" and—true to Rimbaud—Dean is frequently shown suffering for his art while those around him, each in turn, suffer longingly for some kind of commitment out of him. As Dean, James Preston (previously seen on ABC's The Gates) broods beautifully, there's no question about that, and his experience modeling for Abercombie & Fitch serves the film's surface appeal and compensates for some uneven acting. When he's on, however, Preston is undeniably mesmerizing. His hypnotic on-screen seductions sizzle around their edges, especially when he admits to a young man he's picked up on the beach "I'm passive" and then sets out to prove his versatility. 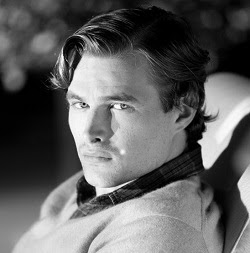 Unfortunately, languorous pacing sometimes breathes the life right out of some of the dialogue (thin enough as it is), forcing the film's visuals to sustain interest. My favorite scene was an acting class where a young actress is instructed to recite the Star Spangled Banner inside her head so as to generate enough intensity to have an audience believe she is waiting for a train. Despite myself, I kept wondering how often this was being done within the film? Another particular standout is Jeff Harnar's moody performance of "I Fall In Love Too Easily", and choice selections of Jo Stafford, Kay Starr and Doris Day to add pop accents to this timepiece.