THE STUFF THAT DREAMS ARE MADE OF: SAN FRANCISCO & THE MOVIES—By Frako Loden 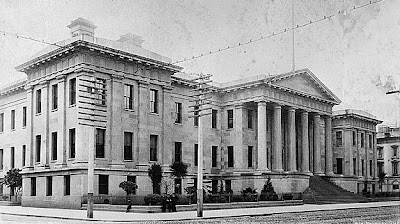 My first-ever peek into the National Historic Landmark Old Mint Building at Fifth and Mission Streets was to preview a new exhibit there running only for nine days: "The Stuff That Dreams Are Made Of: San Francisco and the Movies." From June 16 to 24, the ground-floor rooms of this institution will display posters, photographs and artifacts of the love affair between cinema and one of its most photogenic cities, hosted by the San Francisco Museum and Historical Society (SFMHS).

Curator Miguel Pendás first took us to the chamber housing San Francisco's silent-film history, and there Niles Essanay Silent Film historian David Kiehn pointed out the corner featuring photographer / murderer Eadweard Muybridge, who hosted the first moving-picture exhibition here in 1880. You'll be able to watch the highly immersive "A Trip Down Market Street" by the Miles Brothers, who shot it just days before the 1906 earthquake. Materials will commemorate the California Motion Picture Corporation in San Rafael and of course Essanay Studios, celebrating its centenary this year, where Westerns were born and where Charlie Chaplin developed his Tramp character and shot films in Golden Gate Park as well as the studio's headquarters in Niles.

Author / impresario Eddie Muller introduced the film noir room, where the first poster he acquired—of Lawrence Tierney in Born to Kill (1947)—hangs among several others collected by himself and film programmer Gary Meyer. He was thrilled to learn just recently that the former Hearst building at Third and Market where his grandfather was a pressman and which contained a speakeasy, now boasts a cocktail lounge. The gold vault of the Old Mint is now the Maltese Falcon room, containing a figure of Sam Spade (Humphrey Bogart), a projected "dream" version of scenes from the film, and the mysterious black bird itself owned by John Konstin of John's Grill, where Dashiell Hammett drank, dined and wrote. True to its status in the 1941 John Huston film, the statuette is a copy of a copy of a copy of a copy.

In the room housing materials from more recent studios like Lucasfilm and Pixar, we were told we could take only wide photos and no closeups. Here you'll see inspirational digital sketches for characters like Edna Mode (from The Incredibles), Wall-E, Princess Merida (from Brave), and many others. 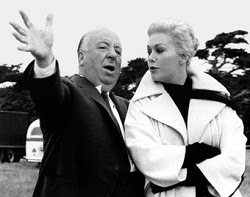 In the main corridor hang paintings by Kim Novak, the eternal San Francisco heroine from her haunting turn as Madeleine in Hitchcock's Vertigo (1958). Pendás says that Novak was offered a scholarship to the Art Institute of Chicago at the same time she was scouted by Hollywood. After her movie career she moved to Oregon, where she now paints winsome Impressionist-style pastels. Pendás says she felt "vulnerable" about displaying her art for the first time, figuring nobody would be interested. Novak will be receiving the San Francisco Cinematic Icon Award at the SFMHS Standing Ovations benefit gala on June 14. Pendás said, "Frankly, I think she's going to be mobbed."

One beautiful spacious room is devoted to San Francisco's independent, experimental and documentary film scene. The Pacific Film Archive lent out materials including a landmark "Art in Cinema" program put on by the San Francisco Museum of Modern Art starting in 1946. Another room features films shot in Chinatown, one of the most photogenic locations in the world, from the early days of the tong-war / opium-den / white-slavery mystique to the pivotal Wayne Wang film Chan is Missing (1982), when Chinese Americans started to explore the district from their point of view. 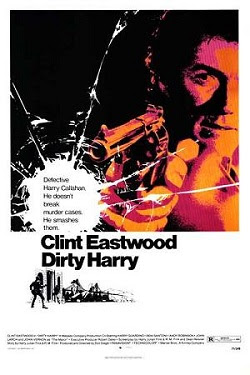 A wax figure of Clint Eastwood standing on a red carpet before a San Francisco International Film Festival backdrop—you can have your photo taken with him—dominates a room telling the history of the San Francisco Film Commission and the 55-year-old film festival through photographs by Pamela Gentile. Another large room explores movies in the themes of "Cars, Cops and Cocktails," dealing with chase scenes, shootouts and drinks unique to the city. Learn cocktail recipes, test your trivia knowledge (what cocktail did Michael Douglas order in Basic Instinct?), and ogle Dirty Harry's .44 Magnum (did he fire six shots or only five?). The main corridor features photos of local movie theatres by R.A. McBride and set photos from Dirty Harry (1971), Take the Money and Run (1969), and Petulia (1968) by Morton Beebe.

The Vertigo room, showcasing perhaps the most romantic (and geographically accurate) film shot in San Francisco, contains the continuity script and the Vistavision camera used to shoot the film. Most intriguing of all will be the "Contemplating Carlotta" corner, where a bench is set up for viewing a copy of the Carlotta portrait as Madeleine does at the Palace of the Legion of Honor in the film. As you contemplate, you'll hear ambient sounds of old Fort Point, where Madeleine was next compelled to drive her sea-green Jaguar and take a dip in San Francisco Bay.