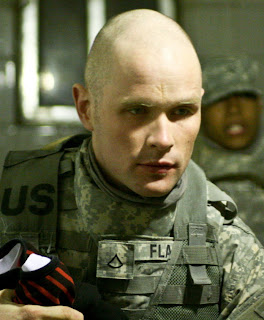 I find Brian DePalma's latest film Redacted lurid, loud and uncomfortably entertaining. Though I was immediately taken to task for using "lurid" as a description ("That's much too easy," I was criticized), I hold to my guns because—as things go here in the Wild West—they're all I have to shoot with. This is no time to give up my gut reactions just because they aren't fully articulated or—God forbid—consensual.

Redacted premiered at the 2007 Venice Film Festival, where it earned a Silver Lion "best director" award for its brutal docudrama reconstruction of the Mahmudiyah killings, the real-life rape, murder, and burning of Abeer Qasim Hamza al-Janabi, a 14-year-old Iraqi girl in March 2006 by U.S. soldiers, who also killed her parents and younger sister. These horrific events offered DePalma the opportunity to once again approach the critique enunciated in his earlier Casualties of War (1989), albeit by way (unfortunately) of a more current war.

In certain respects, Redacted has more in common with George Romero's Diary of the Dead than it does with the recent onslaught of documentaries harrowing the war in Iraq. Both parry and thrust at the many-headed Hydra known as mainstream media coverage to demonstrate how—as soon as one lie is revealed—five more spring into place to control the spin, let alone the masses. Both turn to the democratized press of blogs and YouTube footage to texturally diversify reportage from the front. How I wish I could have sat down with Romero and DePalma at one of Toronto's ubiquitous Second Cup cafes with a videocam and a laptop to edit together today's version of the truth. Wouldn't that have been a truth and a half? 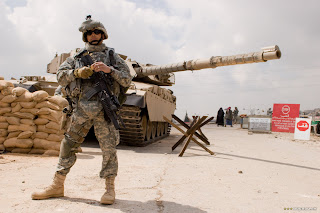 Because it does come down to editing, doesn't it, as a mechanism of social control? That's what DePalma appears to be criticizing, evident by the film's title and laugh-inducing opening credits. What the mainstream media elides or redacts is precisely where accurate reportage becomes questionable and that's a process we should never lose sight of; vigilance being requisite. I commend DePalma's efforts to get at what "really happened" with the rape and murder of an Iraqi girl by American soldiers; I just question his methodology a bit. The FBI prosecution of Steven Green—upon who Redacted's character Reno Flake is based—is fairly well-documented. It's not like those facts have been purposely kept from the American public. Perhaps—more than the psychological profile of Green's "antisocial personality"—DePalma wants to restore our attention to the corpus delicti. The film's final image is what has been hovering in the prurient imagination of its audience throughout the film: the charred, raped body of the young girl shot pointblank in her face. Though admittedly a shocking atrocity, I suspect DePalma enjoyed bringing it to us a little too much just as we enjoyed watching it a little too much, comparable to the grisly murders in some of DePalma's other crime thrillers, not the least being the slashed mouth of the Black Dahlia. The stylistic equation between DePalma's thrillers and his foray into Iraq is why I call the image—and the narrative leading up to it—lurid. Deep down inside, I think it was intended to be; like unattractive photos of a murder scene. That's also not to say it shouldn't have been intended that way. Perhaps exactly the image none of us really want to see is precisely the image that should be seen? But then again, something seems so fundamentally disrespectful in fetishizing this particular atrocity. 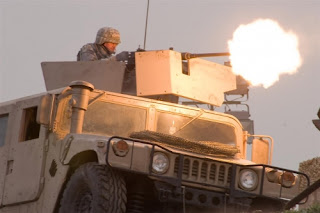 I'm grateful to Richard Porton's incisive essay "Imperial Hubris: Iraq on Screen" in the Fall 2007 issue of Cinema Scope for helping me gain a handle on what it is about Redacted that doesn't quite hit the mark for me, even though I accept it for being exactly the film DePalma aimed for and achieved. Casualties of War profoundly impacted me. Redacted titillated me. Therein lies the difference. Though Porton didn't have the opportunity to view Redacted before writing his Cinema Scope piece, several of his insights nonetheless apply. Namely, that in the liberal zeal to reveal how "un-American" such "bad apple" atrocities remain, an equally questionable practice of colonial expropriation is being applied for the primary purpose of entertainment. While the conscience of PFC. Eriksson haunts me to this day, the whimpering contrition of Lawyer McCoy rings a bit hollow. To borrow from Porton (who is actually writing about In the Valley of Elah): "Unfortunately, these sordid events have much less to do with a critique of the war than they do with providing [Lawyer McCoy] with a cathartic, 'healing' experience. All of these clumsily plotted epiphanies point to the intrinsically American phenomenon of reducing political entanglements to personal crises that can be assuaged, and most likely erased, by what Phillip Rieff once termed 'the triumph of the therapeutic.' " Perhaps more than questioning the basic rationale for the American invasion of Iraq, films like Redacted diffuse our feelings of helplessness by offering scenarios of our sullied ideals. Redacted didn't tell me anything I didn't already know but it rubbed my nose in charred blood. As horror movies go, I guess I can't complain.

10/09/07 UPDATE: At The Greencine Daily Dave Hudson has gathered together the reviews coming in on Redacted from this year's New York Film Festival. He's headlined of particular interest Jürgen Fauth's entry on the redaction of Redacted, complete with YouTube footage of the press conference.
Posted by Michael Guillen at 9/15/2007 02:47:00 PM