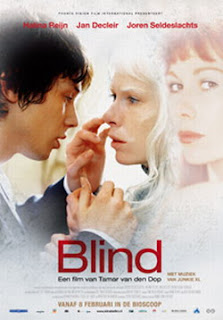 Actress turned filmmaker Tamar van den Dop not only suggests that love is blind in her first feature; but, implies that it must be blind. Beauty is not so much within the eye of the beholder as within the mind of the beholder. Loosely based upon Hans Christian Andersen’s “The Snow Queen”, Blind is an admittedly conventional love story but with a provocative, questionably happy ending. Then again, aren’t all “happy endings” truly questionable?

Ruben Rietlander (Joen Seldeslachts) has gone blind. Enraged by the situation, he is hostile and violent with anyone his mother hires to help him, until Marie Tinnen (in a commanding performance by Halina Reijn) answers his mother’s ad for someone to read to him. Marie is a mysterious woman who does not like to be seen by others. Ten years older than Ruben, she is also an albino, scarred both physically and psychologically. Through Marie we are reminded that parental words are the first mirror in which a child sees their reflection. Brought up on verbal abuse, followed quickly by physical trauma, Marie has survived by hiding in books, which she prefers to life. She is the perfect person to read to Ruben because she loves books so intently. He is soothed by her gentle voice and imagines her young and beautiful. His imaginings and subsequent desire awaken love in Marie and—shielded by Ruben’s blindness—she lets down her guard. And then the unforeseeable happens; Ruben is given the chance to gain back his sight. Will love survive? 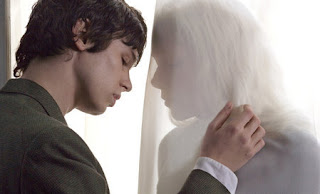 Tamar van den Dop says that the winter landscape of her story “is a metaphor for the frozen state these characters are in. Ruben can only see with his hands; Marie freezes at the mere thought of being touched.” She describes Blind as “a dark tale about true love” and sees it as “an ode to storytelling and the possibility of fleeing into it.” Admitting her fascination with stories, Tamar van den Dop questions: “What happens to us when we listen to music, watch a good film or read a good book? Where do we go? Why does some poetry silence us? Why do we stand in front of a particular painting for so long? We have temporarily gone to another place. For a short time, we are able to use the force of our imagination to conjure up other worlds. We need stories. We need to be able to escape from reality.” 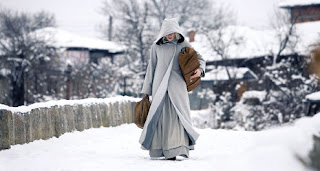 One of the film’s most compelling images is when Ruben imagines giraffes in the snow. The incongruity of the image makes him smile to himself, repeated at film’s end. True to Andersen’s palette, the film is snow white, blood red and black as barren tree branches. Gorgeously lensed by Gregor Meerman and shot in location in Bulgaria, Blind conflates imagery to distill poetry: facial scars are to snow crystals what snow crystals are to drifting apple blossoms. Blind is a film that deserves to be seen.