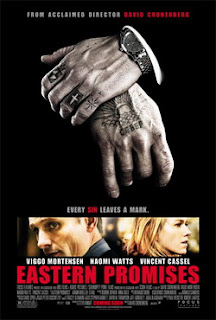 The reviews are pouring in on David Cronenberg's Eastern Promises, and all-in-all they're quite favorable. It scored the highest among the select jury compiled by Screen Daily at the Toronto International and, perhaps even more importantly, scored the Cadillac People's Choice Award voted on by TIFF audiences.

This is one of those films where I appreciated getting some words out early on by way of review and interview before being swept up by the critical flashflood. I do have to take a moment, however, to commend Robert Koehler for his great write-up for the Fall 2007 issue of Cinema Scope. He writes: "Eastern Promises is a fascinating case of a film made under the intense gaze of a supreme auteur and written by the separate but equally potent hand of a writer [Steve Knight]. Where one ends and the other begins defies trace, in the same way that Cronenberg's closing shot on a possibly contented Nikolai defies any easy conclusions."

Koehler had two insights that I thought were superb. The first is his observation that Cronenberg's films frequently indulge "deliberately contained and even hyper-claustrophobic worlds" made up of "families, offices, and social networks" and that "[a] great deal of Eastern Promises entails these networks, how they define characters, and conversely, how character definition can also be deceiving."

Broaching the subject of how one can be deceived by a sharply-defined character, Koehler then deftly and astutely articulates "the double identity of Nikolai, a medium through which a guise, a lie, is the only means to uncover truth. Right now, there's no combination of director and actor that displays a hotter fire and cooler intelligence than the Cronenberg-Mortensen tandem. The actor is perfectly matched to the director's new concentration on the Real, but he's also acutely—even obsessively—conscious of the powers of role-playing as they inform character, so that both his paired Tom-Joey personae in A History of Violence and his even more mysterious Nikolai in Eastern Promises trace patterns of concealment-to-disrobing."

I love that insight and Koehler's amplification of it by describing Nikolai's literal disrobement in the bath house sequence: "[I]n a blistering, brutal and intimate fight in a bath house, Nikolai is naked, battling for his life in an ironic twist of mistaken identity. (The man who isn't what he seems to be is taken for someone else altogether, at which point Eastern Promises reaches a peak of narrative ecstasy.)"

Kudos to Koehler for these enlightening comments.