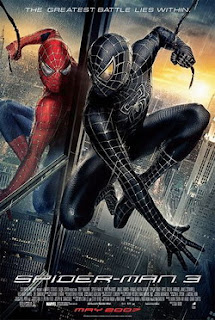 "Spider got tangled in the black web that he spun."—Willis Alan Ramsey

There are some fast and furious special effects in this movie, and they will serve to satisfy Spidey's fans the first weekend or two of this movie's release; but, as a whole, the movie fails for getting too caught up in itself and the franchise is wheezing out of steam.

Spiderman 3 could have been more appropriately entitled Weepyman 3 and no one is more to blame for that than Christopher Young and his (allegedly) "original" music. Audiences aren't allowed to experience even one authentic moment of emotion as Young manipulates reactions to every scene in the film with coldhearted determination and numbing efficacy.

At last night's capacity WOM screening at San Francisco's Metreon IMAX theater, the applause was so tepid it sounded like a few wet fish flopping around on shore. The shouted jeers were much more pronounced and the disappointment palpable. Further, the film's blatant moral—"The greatest battle lies within"—clung persistently like the meteoric parasite that converts Spiderman's costume from red to black. I felt like I was scratching at it furiously trying to get it off me before I turned into … something else. And what would that something else be? A venomous critic? A pablum-fed audience who accepts that immoral behavior can be turned around as simply as changing one's wardrobe? Or crying buckets of tears because it's so hard to do the right thing? Am I the only one who felt that depicting Peter Parker's "bad" side as something of a ghetto pimp was just this side of racist if it weren't so stupid first?

Sam Raimi's best work here is in the comic asides. Brief cameos by Stan Lee and Bruce Campbell earned applause. Campbell, in fact, steals the show as a maître d'. Topher Grace follows closely behind with his obsequious Eddie Brock and his power-addicted Venom.

Yes, the aerial battle sequences between Spiderman and the Green Goblin were a hundred times more spectacular than similar sequences in the first Spiderman, although admittedly much more violent and visceral, literally bonecrunching. I look forward to watching this film again on dvd where I can turn the mute on and fast forward to the action sequences. Yes, the Sandman reminded me of The Mummy all over again right down to the howling sandstorm sequences. Yes, Venom needs a dentist. Yes, Kirsten Dunst should not sing and Bryce Dallas Howard should sing, "Do you know the way to Mandalay?" Yes, objects like wedding rings and lockets are hopelessly fetishized. And Tobey Maguire? There comes that sad moment when an actor caricatures his own portrayal of a character; a sure sign to move on before getting caught in the web of Spiderman 4.

As a comic book reading teenager, Spiderman was my favourite. I think the transition to big screen has been quite good and faithful to the spirit of the comics. I didn't have any major problems (as you obviously did) with Spiderman 3, but I thought it was too long.

But it was filmed in my hometown of Cleveland!!! That's alllllll that matters to me about this film. Can't wait to see my city on the screen. I'm sure it sucks like you say, so it's nice to know I have a bias that will enable me to screen out the sucky-ness more than most.

hey i just did my third interview with Tsai Ming-liang. i understand your a big fan.