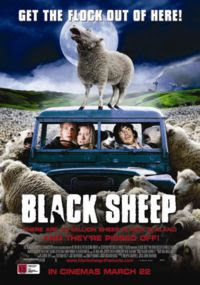 What can I tell you? This movie is so baaaaaaaaaad, it's good!

I'm grateful to programming associate Rod Armstrong who—scouting the Midnight Madness series at the 2006 Toronto International Film Festival—secured Jonathan King's New Zealand horror flick Black Sheep for his San Franciscan audiences, albeit for a sole late night screening. Though I'm not one to usually stay up late for festival fare, I couldn't resist finally catching a film that had been unanimously recommended by my Twitch team mates and to gauge the alternate demographic attending the film; a youthful crowd hungry for comic gore. I think I might have been the oldest member of the audience and fully expected someone to come up to me to say, "Silly rabbit, Trix are for kids!"

There's always a black sheep in a wealthy family. In this case, it's elder brother Angus who subverts his father's sheep raising enterprise into something a little more hair raising. Younger brother Henry—in therapy for his ovinophobia—returns home to find the wooly herds have gone genetically awry.

Citing the resemblances, influences and deliberate homage deftly structured into Black Sheep, Rod Armstrong noted Peter Jackson's Bad Taste (1987) and commented that King actually worked with Jackson's WETA Workshop to develop the film's sheep-human-werewolf hybrids ("were-sheep"). Another obvious inspiration is Sam Raimi's classic The Evil Dead (1981). In his Twitch review Andrew Mack writes that King himself cited An American Werewolf in London (1981) as one of his favorite horror films and an inspiration for Black Sheep. Mack, by the way, deserves an honorable mention for his alliterative description: "monstrous mutton mutants"! In his Twitch review, Todd Brown confirms Rod's allusion to Peter Jackson's Bad Taste where, apparently, Jackson blows up a sheep. Todd adds that Black Sheep's "sublimely silly premise [is] pushed out as far as it can possibly go . . . maintaining a crackling pace throughout." Further, in his interview with the director, Todd also references Billy O'Brien's Isolation (2005) [which Bruce Fletcher pulled into Holehead's 2006 lineup], another example of genetic experimentation gone wrong set on a farm. Isolation, however, is about killer cows and takes itself much more seriously. It is an intriguing coincidence that both films came out around the same time. Must be something in the meat.

Todd's interview with King likewise underscores the choice (whether budgetary or aesthetic) to deliver the film's visuals through in-camera effects rather than CGI, accounting for its 80's innocence. Whereas in the 80's there might have been stylistic throwbacks to the era of 50's horror and science fiction, it's noteworthy that pre-CGI has now become a kind of nostalgic aesthetic, which Black Sheep utilizes to winning effect. And as someone who grew up with a grandfather who was a sheepherder and a stepfather who was a sheepshearing contractor, and who worked as a wool gatherer for my stepfather during my junior year, Todd's question about what you can get a stunt sheep to do was charmingly naïve. As King answered him, sheep are very similar to dogs in what they can be trained to do. We had a pet sheep named Sancho who was trained to be a "judas sheep", the one who wears the bell and leads the herd into the shearing corrals. Sancho was one of the most intelligent pets I've ever had.

Relaying notes forwarded by the director, Armstrong said King wanted to bring together two things that he loved: horror films and sheep. "I think the results speak for themselves," Rod quipped. "He also has a more subversive agenda," Rod added, "which is to play with the image that people have of New Zealand." King says there is a common joke among Kiwis about people who live on farms and exactly what they do with sheep and he also wanted to skewer the bucolic image that the New Zealand Board of Tourism wants to promote: "See where Lord of the Rings was filmed!" Rod believes Black Sheep is a lot more fun though the cinematography of the New Zealand countryside is every bit as vivid. "I actually think the New Zealand Board of Tourism should get behind this film too!" Rod asserted and his audience laughingly agreed.

When King brought the idea to Peter Jackson's modeling and effects workshop, they realized how readily sheep can transform into monsters; they have creepy eyes and scary feet. Without question, one of the film's successes is how King sets the stage so that by the time a herd of sheep crest a pastured hill, you panic. As King mentioned in his interview with Todd, if you buy the early scene where the mutant lamb puppet bites Grant, the environmentalist, "you're on board for the rest of the ride."

Thanks again for helping me out last night. Good deed never gets forgotten, as a godfather says... :)

I'm the one who benefited from your company, Tony. It was fun talking with you and Frako and watching Paprika.