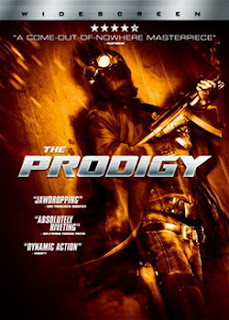 Usually when you think of child prodigies, you envision mastery over a piano or a violin, not murder. This action thriller starts off with a video interview with a young kid being asked what it feels like knowing he has violently hurt others. "It doesn't," he states flatly staring into the camera. This catches the attention of assassin Claude Rains who admires the kid's candor and obvious talent for coldblooded mayhem. He appoints him his successor and anoints him with blood.

Mike Watt at Film Threat was perhaps the first person to promote William Kaufman's The Prodigy, way back in October 2004. I'd be curious to know how he accomplished this since the film didn't actually have a world premiere until horror impresario Bruce Fletcher nabbed it for San Francisco's (Yet Another) Hole in the Head Film Festival in early June 2005. Notwithstanding, Watt kickstarted the praise by stating The Prodigy was a crime movie that played like a horror movie. Hell, he called it "a little come-out-of-nowhere masterpiece" and fervently opined: "If there is any justice in the business, when The Prodigy starts making its festival rounds, a studio with clout and integrity will pick up this little gem and allow the principals to pay back their supporters and themselves." So much for justice. The Prodigy premiered at Holehead in San Francisco, Fletcher took it to the Idaho International Film Festival, it played the Raindance Film Festival in London, England, and had already gained a following at private screenings in Dallas. Yet it's never had an official U.S. distribution so—before its Fireside Releasing launch on DVD later this month—Fletcher stepped in once more to champion the film by running it at the Roxie Film Center under the aegis of Dead Channels from Friday, May 25 through Thursday, May 31. I encourage you to catch it on a large screen like it's meant to be seen and to take advantage of director William Kaufman and actor and co-writer Holt Boggs opening night apperarances.

When Dennis Harvey caught the film at Holehead and reviewed it for Variety, he tempered his reservations with genuine enthusiasm: "William Kaufman more than compensates for sometimes murky tale's familiar genre elements with punchy ultra violence, vivid atmosphere and a first-rate tech sheen on a smalltime budget." Sheen is the perfect word. The stylized look of this film is nearly hypnotic, even if sometimes confusing. The Prodigy has cult clout. 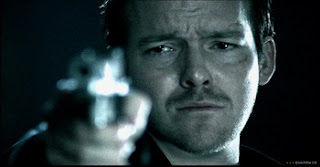 So it turns out the young kid who doesn't feel when he harms others is protagonist Truman Fisher (Holt Boggs) as a young boy. Whatever plans he might have had to give up his criminal life and settle down with his squeeze Nicki (Mirelly Taylor) goes out the window when mythic assassin Rains shows up to begin his initiatory training. He's been tracking Truman all these years and wants him to take over his reign of terror. He's nicknamed Claude Rains because he's an "invisible" hitman who, as Watt states it, "makes hardcore criminals eat their vegetables." Apparently, along with the nickname, Rains' wardrobe was intentionally modeled after that of the Invisible Man in the 1933 classic. Thus, all the taglines rush in where angels fear to tread: "Sometimes what you are looking for ... is looking for you"; "Every man has a dark side ... One man's dark side is about to be awakened"; and "If God uses suffering to refine us; then why blame the Devil at all?"

C.G. Jung's answer to Job seems particularly relevant while staring into this dark and violent whirlwind of a movie and Holt Bogg's character Truman Fisher is precisely ensnared in Job's biblical dilemma. Boggs—who has been likened unto Ben Affleck—deserves a classier comparison than that. I'd say he looks more like a young, thin Orson Welles. He's the film's "true find", its "star", infusing his morally-ambiguous character "with a depth and intelligence not usually found in low-budget crime thrillers (or big budget ones, for that matter)" (Watt again) and I hope to see his upcoming performances in Road To Red (in post-production) and Tenebrous (filming) soon. 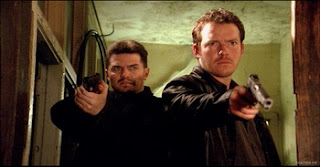 When an independent first feature looks this good and is this compelling, it deserves the support of its audiences. If you're a fan of independent film, vote with your bum in the seat. Likewise, my vote goes to Bruce Fletcher and the quality he's continuing to bring San Francisco through Dead Channels.