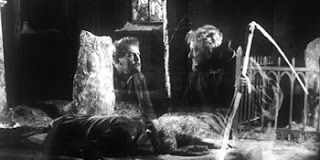 Though Cinematical's James Rocchi enjoyed the pairing of Victor Sjöström's The Phantom Carriage with Jonathan Richman's "score", I found the experiment an irksome failure. I would have much preferred silence to this squawky, screechy, lurching composition that Richman imposed upon the film. Most importantly, and oddly enough, Richman and his crew repeatedly distracted me from the film (which in and of itself had a superimpositional allure; check out Squish's write-up at The Film Vituperatem). In what I consider to be a serious error in judgment, Richman elected to emphasize dramatic moments on screen by suddenly going quiet, as if that would highlight the on-screen action; but, all it effected was to divert anxious attention to the musicians, wondering what had happened? Had they lost their sheet music? Maybe we all would have been better off had they lost their sheet music? Lincoln Spector at Bayflicks.Net concurs that these moments of silence seemed arbitrary. Shahn at Six Martinis and the Seventh Art noted that Richman and his combo "seemed to perform set pieces which lasted different lengths than the scenes on the screen they were meant to accompany" and that, fundamentally, "it didn't work as a soundtrack." He likewise expressed his disfavor of the trend to pair "any old musician" with silent films. Brian Darr at Hell On Frisco Bay—though more obliging to Richman's effort than myself—somewhat concurs and elucidates that the function of a narrative film score is to "sustain and propel changing moods", which Richman's "score" did not achieve. 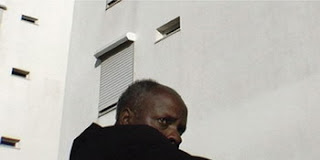 Pedro Costa's Colossal Youth is difficult viewing, a long stretch, but—man!—its compositional dexterity conjures up every painterly criteria I can think of. It was very much like being allowed sole access to a darkened museum where paintings hover midair illuminated by focused spots. Part Caravaggio, part Rembrandt, its psychological approach to lighting served to illuminate insight from within and reminded all over again of the gravitational force fields of images that pull you into orbit. I can fully understand why Darren Hughes flew all the way from Knoxville, Tennessee, lured by the opportunity to view this film one more time, having caught it at Toronto last Fall. It requires that much attentive respect. Don't be surprised if it resurfaces later on The Evening Class in an amplified write-up.

The Devil Came on Horseback, Annie Sundberg and Ricki Stern's documentary on Former U.S. Marine Captain Brian Steidle's efforts to alert the world to the atrocities being committed in Darfur, was equally difficult to watch but for different reasons. Repeated imagery of charred and tortured bodies set against Western indifference made for a somber, timely testament of the ongoing genocide condoned by the Sudanese government. The Q&A was equally difficult but for more mundane reasons. The measured and informative comments by the director and representatives of local activist agencies often met bizarre and grandstanding opinions in the audience. I tired of the frequent attempts to co-opt the discussion and left early to get away from the stink of a "more moral than thou" atmosphere. 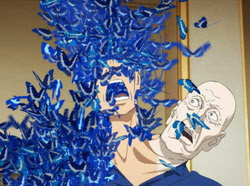 Though visually arresting, the themes in Satoshi Kon's Paprika were beaten with a stick and—in my estimation—the audience response was surprisingly tepid. I should have been content with all the adulation at Twitch.

Pascale Ferran's Lady Chatterley is admirably faithful to D.H. Lawrence's story "John Thomas and Lady Jane" (the nicknames granted the sexual organs of that story's impassioned protagonists), especially in its manner of representing how passion motivates tropisms of soul within the context of seasonal landscape. Passion becomes the regenerative light and warmth to counter a stifling and oppressive class structure, momentarily obliterating it in the equal playing field of the mutual orgasm. It's compelling to watch how Jean-Louis Coullo'ch as the coarse gamekeeper Parkin and Marina Hands as Lady Chatterley blossom in their love and desire for each other, becoming more handsome and more beautiful as the film and their affair unfolds. 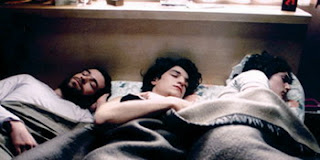 Cristophe Honoré's Dans Paris is a sexy, sophisticated homage to l'amour fou this side of the nouvelle vague, tipping its hat to Godard's narrative experimentations and Truffaut's sung dialogue (wonderfully replicated on the SFIFF website). When a script this intelligent likewise features pert breasts and arousing glutes, satisfaction's more than guaranteed, especially when those breasts are on Joana Preiss dancing topless in her flat and the lean buttocks belong to Romain Duris and Louis Garrel, two of my favorite French heartthrobs. Meow. 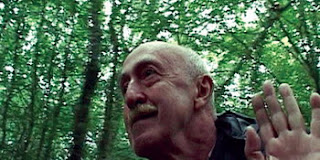 Otar Iosseliani's Gardens In Autumn was perhaps my main disappointment from SFIFF50, lacking narrative structure and offering self-serving spontaneity as a substitute. It reminded me of the admonition in Antonio Machado's poem: "What have you done with the garden entrusted to you?" Though Michel Piccoli never failed to amuse in drag, he was not enough to save this film. By contrast, Julie Bertuccelli's Otar Iosseliani, The Whistling Blackbird is a fascinating study of the idiosyncratic filmmaker during the making of the less-accomplished Gardens In Autumn; clearly one of those rare instances where the "making of" is better than the film. I saw Bertuccelli's documentary first and, after finally seeing the film, it bolstered my appreciation of producer Martine Marignac's irate frustration. Otar really didn't need those scenes with the wild boars; they added nothing to the film other than a brief, visual aside. I loved when Bertuccelli asks Iosseliani: "What is the opposite of the singing blackbird?" Iosseliani doesn't miss a beat: "The man who works too much." 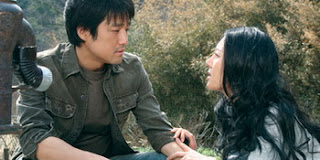 Im Sang-soo's The Old Garden, on the other hand, is a well-tended piece of cinema. Sirkian in ambition, it shifts melodrama towards poignant relevance. Though essentially a love story, The Old Garden reminded me of that moment when a regional cinema expresses its local history in such a way that it crosses over to an international audience. Though I knew nothing about the Gwangju Massacre going into the theater—something the film's presumption has been sometimes faulted for—I left wanting to know more. The thrall of memory becomes a handmaiden to transcendence; the ashen trace of self-immolated revolutionaries becomes all that's left of love sacrificed on the altar of politics. The love that remains haunts with a wisp of a smile on its face.

Regarding the quiet moments in the score for the Phantom Carriage: the grapevine didn't tell me about this until after completing my write-up, but apparantly the gaps were caused by the fact that Richman & co. practiced composed and practiced to a videocassette with a different frame rate from the one projected at the Castro. Which meant that the tempos they'd practiced were too fast for the film as shown, and they tended to finish too soon. I guess shahn was on the right track with the comments about the pieces seeming mismatched.

Clearly it's a mistake that could easily trip up a rookie silent film orchestra without access to a film print and projector for practice purposes. Still, though I was confused by the silences I found a few of them to be dramatically effective, which is one reason why I didn't comment on them in my piece (other than by linking to Bayflicks). That they were accidentally so doesn't bother me, though I appear to be in the minority in that opinion (just as I'm in the minority that Lambchop's score for Sunrise a few years back contained a few effective moments, accidentally or not).

One thing's for sure: the American Music Club didn't have this problem with the score they composed for Street Angel in 2005. For whatever reason, that worked really well.

Love reading this post, especially the parts that make me feel a little less bummed out for missing Paprika and Gardens in Autumn.

What an informative post, Brian, thank you! I knew something was up with those weird silences! Thanks for the skinny.

I remember the Lambchop score to Sunrise some years back. Isn't that where the guy with the gravelly voice started singing words and folks got all kvetched?

That's the one. Usually trotted out as exhibit A (if not exhibit A-Z) around here for why non-traditional silent film scoring must be approached very carefully. Luckily I was already familiar with Sunrise beforehand, and for me the imagery was strong enough to overcome the score. And though it's been long enough ago that I can't recall just where and how, but I did find that a few moments in the film benefitted from the odd juxtopositions provided by the band.