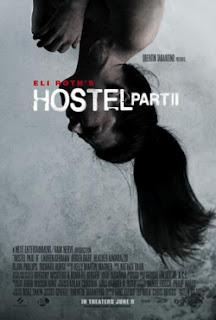 Every now and then you're thrown a choice plum, even though sometimes it's dripping in blood!! Tonight I was among the first audience to see the world premiere of Eli Roth's anticipated sequel Hostel 2, with Roth in attendance to introduce the film and to field questions afterwards. Was the torturous wait worth it? Absolutely!! 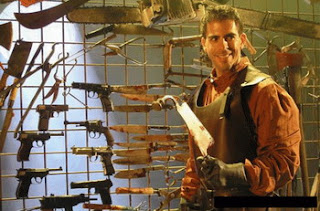 Fresh from the resounding adoration of his Grindhouse faux-trailer Thanksgiving, Eli Roth has picked up his tale exactly where the first film left off. Paxton (Jay Hernandez), minus a few fingers, is found bleeding on a train. If you recall, he kept his head and survived the Slovakian torture factory. That proves essential to kick start this story which introduces three young women touring Eastern Europe—Beth (Lauren German), Whitney (Bijou Phillips), and Lorna (Heather Matarazzo)—who become beguiled by Axelle (Vera Jordonova), one of the most seductive villainesses in recent cinema history. She lures the nubile trio to our favorite hostel in Slovakia, allows them an evening to enjoy a harvest festival and the following day to soak in the spa, oblivious to being auctioned off to the highest bidder. Americans Todd (Richard Burgi) and Stuart (Roger Bart) win the international bidding war (gleefully rendered in split screen) and arrive in Slovakia ready to fulfill their secret sadistic desires. The rest, you might say, is a slice of life.

A major shout-out to Heather Matarazzo who may just become the reigning queen of lesbian gore. Not to be mistaken with Lesley Gore. She'll never be able to go back to the Dollhouse now. Every moment she's on screen is a delight.

Eli counters that it's a matter of personal taste whether audiences find this sequel funnier than the original. He happens to think the original was just as funny; but, I don't agree. Hostel's tone was decidedly more paranoid and uncomfortably mired in dread. That may have been partly because Hostel was influenced by the extreme cinema coming out of Asia—the work of Takashi Miike (who had a cameo in the first film), films like Audition, Battle Royale, and Chan-wook Park's Sympathy For Mr. Vengeance. With Hostel, Eli wanted to place this extreme Asian violence into an American genre film. 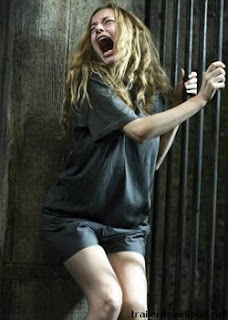 Whereas while he was toying with Hostel 2 and writing the sequel, Roth went to Rome where he met such great Italian directors as Sergio Martino, who made the amazing I Corpi presentano tracce di violenza carnale (Torso, 1973). Roth also saw other films like Avere vent'anni (To Be Twenty, 1978) by Fernando Di Leo—"Which was just so fucking sick; the ending of this movie I just couldn't fucking believe it"—and L'ultimo treno della notte (Night Train Murders, 1975) by Aldo Lado. These were all early 70's giallo films; not the operatic Argento-style giallo but the realistic-style giallo. 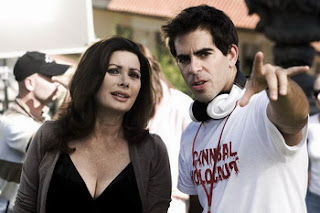 While in Rome, Roth lunched with the beautiful actress Edwige Fenech with whom he fell "madly in love." Though currently a producer and distributor, Fenech came out of 15 years of retirement to play the role of Hostel 2's Art Class professor. The Italian detective in the opening hospital sequence is Luc Merenda, the star of many 70's polizia films and famed director Ruggero Deodato (Cannibal Holocaust, 1980) flew from Rome to portray Hostel 2's cannibal (in an over-the-top scene that puts Hannibal Lecter to shame). So, yes, without question, Hostel 2 pays homage to the 1973 Italian giallo films that Roth had never seen until recently and I suspect this influence has rewardingly stylized the violence.

06/06/07 UPDATE: Kimberly over at Cinebeats has, yet again, compiled an exquisite and thorough profile of Edwige Fenech, which greatly amplifies this entry. Check it out!
Posted by Michael Guillen at 5/31/2007 01:35:00 AM

I wonder what effect this duo of films has had, will have, on tourism to Slovakia.

I still remember in the first installment, when one of the characters mentioned that something-or-other was a certain way "because of the war"...

I don't think I'll be running to see this one any time soon, but wonderful info about Roth's bit of cinematic education!

Thanks, as ever, for stopping by Pacze Moj! Please stay tuned as I'm in the process of transcribing Roth's ebullience at the Q&A following the world premiere screening as well as a roundtable interview I just had with him this morning! Whether you like his films or not, the man has a gift for gab!

I seem to be in the minority, but I enjoyed Hostel I and thought it was one of the better American horror flicks released in recent years so I'm looking forward to part 2.

Kimberly, I'm genuinely pleased to hear that. Over at Twitch, where I also posted this piece, the comments section is kneedeep in bitchery. Mileage varies, of course, but sometimes I wonder.

I knew nothing about Fenech until this film. The art class scene is quite clever actually; inverting presumptions about the objectification of the female body. What else has she been in that you might recommend?

It's strange, but I don't understand why so many people seem to dislike Hostel and Eli Roth so much. I don't know a lot about the guy personally, but I'm a longtime avid horror fan and I thought the first Hostel film was really entertaining and more interesting than a lot of recent American horror films. I'm so sick of remakes and at the very least Roth's Hostel had some original ideas which was nice to see.

As for Edwige Fenech, I highly recommend the gialli films she's been in. Some of my favorite Fenech performances can be found in 5 Dolls For an August Moon (it's one of my favorite Mario Bava films!), The Case of the Bloody Iris, The Strange Vice of Mrs. Wardh and Your Vice Is a Locked Room and Only I Have the Key.

Fenech is really lovely! She also seems totally sexually uninhibited in her 60s & 70s era films and it's fun to watch her seduce her male and female costars, as well as get seduced by them. She's often a "victim" but she not your typical victim and I think her natural sensuality makes her a really interesting actress.

I'll try and write a post about her soon over at my own blog since I'm personally really excited to see her returning to horror films like Hostel 2.

ohmigod! You LOVED "Hostel 2"?! NOT to say that I've seen it or am in any position to pass pre-judgement, but, Michael... YOU just don't seem to be the hack-saw-to-the-limbs kinda guy!
:)

I LOVED "Hostel" as sort of a joke! I find Roth a bit annoying, and loathed "Cabin Fever" when it screened at SFIFF a few years back. But...

I am nothing if NOT forgiving!

I agree completely on Kimberly's choices of Edwige Fenech movies, although I think Your Vice is a Locked Door... is the weakest of the group... I'd probably substitute the hypnotic All the Colors of the Dark. She has incredible presence and is quite a strong actress (several of these have good examples, but Anna: Portrait of a Call Girl, an otherwise mediocre movie, includes an excellent performance by Fenech), which makes her altogether more interesting to seek out than many other similarly beautiful actors in the types of movies.

And thank you for the excellent review. I'm looking forward to the movie more than ever.