One of my favorite lines is when playwright James Goldman has Eleanor of Aquitane quip in The Lion In Winter (1968): "What family doesn't have its ups and downs?" Comparable in familial disharmony and court intrigue, Zhang Yimou's third entry into the wuxia genre—Curse of the Golden Flower—is his most accomplished. Sumptuous as embroidered brocade, Curse of the Golden Flower outdoes the last two entries in spectacle but is most noteworthy for avoiding the politically confusing obfuscations of Hero and the vertiginously saccharine sentimentality of House of Flying Daggers. Its elegance is not only in its production design, but in the stark lines of its dark story: a brooding meditation on the corrosive heart of gold. Underneath the veneer of China's most expensive movie to date is an economy of tragedy to rival Shakespeare. Its central themes are bitterly grasped though guised by opulent pageantry. As the ancient Chinese saying goes: "Gold and jade on the outside, rot and decay on the inside." 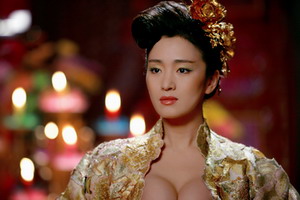 Set in the Later Tang dynasty of the 10th Century—one of the most flamboyant dynasties of Chinese history—the imperial family is collapsing under the weight of its own wardrobe, overly burdened with secrets and glossed-over resentments that are layered one upon the other, as intricately and lavishly as the royal robes. The cruel and handsome Emperor (Chow Yun Fat) is not getting along with his ravishingly scornful Empress (Gong Li). They strategically manipulate their three sons to achieve their cross-purposes; he with black mushrooms and she with golden chrysanthemums, and their offspring with conflicted ambitions. 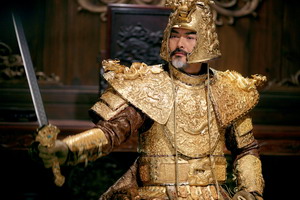 Liu Ye, as the Crown Prince Wan, the Emperor's eldest son and the Empress' Stepson, is hard pressed to resist his Stepmother's demanding advances, reminding us that vice is nice but incest is best. The Middle Son Prince Jai (Jay Chou) returns from the battlefront to protect his mother from his father, and the Youngest Son Prince Yu (Qin Junjie) warns of the hazard of an innocent smile. Add to the mix the duplicities of the Imperial Doctor (Ni Dahong) and the tortured past of the Imperial Doctor's Wife (Chen Jin) and you have all the elements of an ensuing if complicated coup d'état. 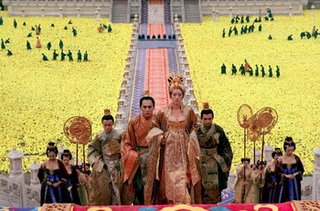 Interestingly, this is not a study of good against evil between parties, as much as it is about the intrapsychic tension between good and evil, rendered first within the individual, then between family members, and then between national factions. No character exits this film blameless but it's the Emperor and Empress who are most culpable for their vengeful brood; a cautionary reminder of the hexagram's plight—as above, so below; as within, so without.

Any study of warriors, from Nahuatl poetry to the political machinations of the Later Tang, synonymize the fugacity of human life with the fragility of flowers. In cultures around the world and throughout time warriors are the flowers of the sun. Crushed petals equate to warfare's carnage and Zimou has depicted this metaphor masterfully in Curse of the Golden Flower. He leaves it to his audience to determine why the curse, as he invites them to feast at a desolate banquet.

Cross-posted at Twitch, who has been keeping up with this film since it was originally entitled City of Golden Armor.
Posted by Michael Guillen at 11/16/2006 12:55:00 PM

The previews I saw in a theater were stunning... I'm looking forward to it!