Dawn McElligott reports to The Evening Class from Milford, Pennsylvania's Black Bear Film Festival and cautions moviemakers weary of film festivals that you never know where an unexpected opportunity might lie.
* * * 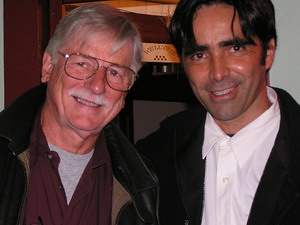 Moviemakers weary of film festivals should take note: one such event gave birth to a production company and an independent film with a multi-million dollar budget. The new film by Carlos Bolado is largely the result of events surrounding the 2003 Black Bear Film Festival, held annually in Milford, Pennsylvania, a popular weekend destination for New Yorkers about 70 miles northwest of the city. Schmoozing at the 2003 film festival brought together a disparate band of moviemakers. They eventually chose Bolado to direct a movie about eternal love, heroism, betrayal and revolution.

Northeastern Pennsylvania residents know Bill Rosado as the founder of the Rosado Group, a consortium of auto dealerships. Few knew he had another passion: honoring the memory of Felipe Carrillo Puerto, a hero in his native country, Mexico. Rosado had been trying for years to attract moviemakers to the love story of Felipe Carrillo Puerto and New York Times reporter, Alma Reed.

In the early 1920s, Carrillo Puerto became governor of Yucatan. The progressive leader fought for the rights of the largely impoverished indigenous people. He ran afoul of the henequen plantation owners. Many were becoming wealthy by exploiting the laborers of Mayan descent.

As the plantation owners or hacendados conspired against Carrillo Puerto with certain members of the government, Alma Reed arrived in the Yucatan. When the journalist met Carrillo Puerto, it was love at first sight. The governor called her "Peregrina"(pilgrim). He had a love song, "La Peregrina" composed by Yucatan poet Luis Rosado Vega with music by Ricardo Palmerín. The governor also divorced his wife of many years and became engaged to Alma. However, Carrillo Puerto was executed by rebel soldiers just 11 days before he was to marry his true love in San Francisco.

Carrillo Puerto's memory is greatly honored today, especially in the Yucatan, the region of Rosado's birth. The car dealership entrepreneur had written letters to such directors as Steven Spielberg, hoping to bring the transcendent love story to the big screen. For years he received no response from Hollywood. Media coverage of the 2004 Black Bear Film Festival helped him to discover the screenwriter around the corner.

Rosado contacted Vose and the two began hammering out the details. Rosado Productions was born. At times, the task seemed too demanding and the project was almost cancelled. Yet, the love story haunted Rosado. It needed an experienced, sensitive director. Within a year, Vose secured Mexican-born, Carlos Bolado, to direct the film. Bolado's debut feature, Bajo California: El Limite del Tiempo received seven Ariel Awards (the national film award of Mexico). Promises, a documentary he co-directed with B.Z. Goldberg and Justine Shapiro, was nominated for an Academy Award in 2002.

Bolado's latest film, Sólo Dios Sabe, was presented at the 2006 Black Bear Film Festival on October 14. Sólo Dios Sabe, whose English translation is "Only God Knows," explores themes of fate, faith, romantic love and the legacies of our ancestors. Some of these themes are sure to be woven into the new film, Peregrina, A Revolutionary Love Story.

Immediately after the Black Bear Film Festival screening of Sólo Dios Sabe, the Director conducted a Q&A session with the audience. The viewers gushed with praise for the film's visual beauty, sensuality and symbolism. Rosado Productions will begin filming Peregrina, A Revolutionary Love Story in February. A wider audience will be able to see Sólo Dios Sabe a few months later, as it is scheduled to be released in US Theaters for spring, 2007.

The photograph of Ken Vose and Carlos Bolado at the 2006 Black Bear Film Festival was taken by Dawn McElligott. Cross-posted at Twitch.
Posted by Michael Guillen at 11/06/2006 06:32:00 AM

Correction: It was Debra Rosado's passion for this story and Debra Rosado that contacted Ken Vose. Some men, especially the older generation just don't want to give credit to women.