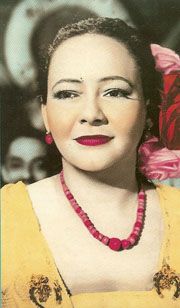 There has just been too much going on film-wise in the San Francisco/Bay Area these last couple of months and I've been remiss in alerting my readers to my friend Tere Romo's Latino Américas Film Series at the Yerba Buena Center for the Arts, co-presented with the Mexican Museum and the Museum of the African Diaspora (MoAD), with support from the SF Grants for the Arts, LEF Foundation, and media sponsors: El Tecolote and SF Bay View newspapers and KPFA. You still have a chance, however, to catch the third and final installment of her film series exploring various aspects of the African Diaspora in Latin America. This program celebrates the lives and contributions of two Afro-Latina singers and will screen Wednesday, November 15, 2006, 7:30 pm; Yerba Buena Center for the Arts, 701 Mission @ 3rd Streets, San Francisco.

Tribute to Toña la Negra (Jesse "Chuy" Varela, Music Director of KCSM, San Mateo). Varela presents a multi-media tribute to Mexico's famous Afro-Mestiza singer Toña La Negra (1912-81). Born María Antonia del Carmen Peregrino in Veracruz, Toña la Negra moved to Mexico City and made her professional debut in 1933. In addition to many years of radio and recording success, she also appeared in a number of Mexican films, in both musical guest roles and as a supporting actress. But it was her immoral renditions of Agustín Lara's romantic music, especially the African-inspired Caribbean boleros, that made her one of Mexico's most recognizable voices. 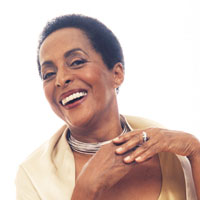 Susana Baca: Memoria Viva (Mark Dixon, Peru/Belgium, 2003, 54 min., English subtitles). In this documentary, Susana Baca is not only a champion in the performance and preservation of Afro-Peruvian heritage, but also an elegant singer whose shimmering voice sings of love, loss and life. Baca and her husband Ricardo Pereira have founded the Instituto Negrocontinuo (Black Continuum Institute) in Lima, a spirited facility for the exploration, expression, and creation of Black Peruvian culture. While Baca has dedicated herself to researching and performing virtually all forms of Afro-Peruvian folklore, it is the landó that has become her trademark. A highly evocative mix of Spanish, Indigenous and African rhythms, the landó is the sound of Black Peru.